As COVID 2nd wave gets stronger in India, percentage of citizens willing to take the vaccine goes up to 77%

April 3, 2021, New Delhi: India is firmly in the grip of a 2nd wave of the COVID-19 as daily cases rise across the country that has already crossed 12 million-mark with 160,000 deaths. The country is now recording almost 90,000 daily cases, a peak it had touched in September 2020. Notably, the kind of rapid surge experienced in India with daily cases going from 16,000 to 90,000 in 2 weeks also indicates that there may be strains different than the 2020 SARS-COV2 strain propagating in the country. The Government has reportedly claimed that both Covishield and Covaxin vaccines are effective against the UK and Brazilian strains of SARS-COV2, while work against South African strain is on at several laboratories. All of these developments have become primary drivers for more people to take the vaccine. With vaccination for all citizens above 45 beginning on April 1, the daily inoculations are expected to jump to an average of 50 lakhs a day. India has already administered over 7 crore vaccine doses.

There haven’t been major side-effects reported in India. The National COVID-19 Task Force of India after reportedly considering all “serious” side effects maintained that there are "no immediate concerns" and that the number of adverse events in Indians "very low". The total adverse events reported are less than 10,000 and adverse event deaths post vaccination stood at less than 100. Though side effects are not a major concern, people have been reading up on several nations restricting use of AstraZeneca vaccine to all or some of their population leading to some individuals asking in local circles about where they could get Covaxin in their district/city.

With all of these developments, LocalCircles decided to conduct another survey to understand that with a strengthening second COVID wave whether citizens’ hesitancy to take the vaccine has changed and how. Also, it tried to understand from people the kind of side-effects they or their family members experienced. The survey also tried to capture whether there was a higher preference for a particular vaccine amongst the people. The survey received over 27,000 responses from citizens located in 299 districts of India.

LocalCircles has been collecting responses from citizens to know their willingness to take the COVID-19 vaccine, aimed to understand if the percentage of reluctance or hesitancy amongst citizens has increased, reduced, or is unchanged. The survey conducted by LocalCircles on March 1st 2021, indicated a 36% drop in vaccine hesitancy within 45 days with 64% willing to take the vaccine. 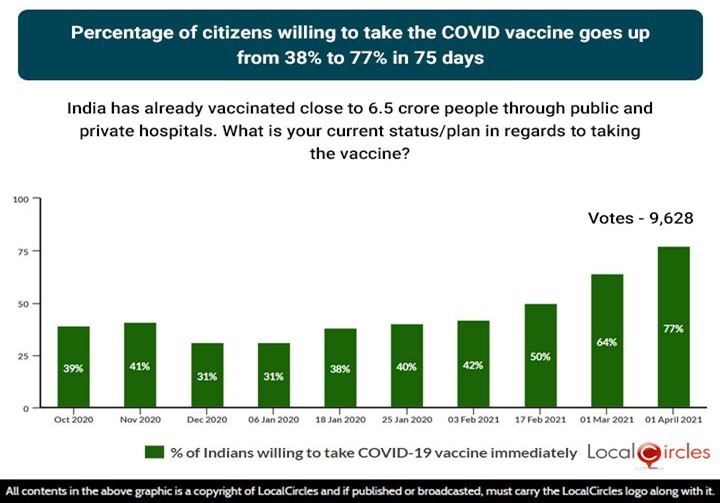 75 days after COVID-19 vaccination began, only 23% citizens now hesitant to take it

The last LocalCircles vaccine hesitancy survey conducted on March 1st, 2021 indicated that 36% of citizens were still hesitant to take COVID-19 vaccine immediately. As more people started to take the jab including the Prime Minister and leaders of various states, the hesitancy continued to decline. The decline was accelerated further after India started seeing a surge of COVID cases starting mid-March with India’s daily case load rising from 16,000 per day on March 14th, 2021, to near 90,000 per day now. This week, the percentage of citizens hesitant to take the vaccine now stands at 23%. 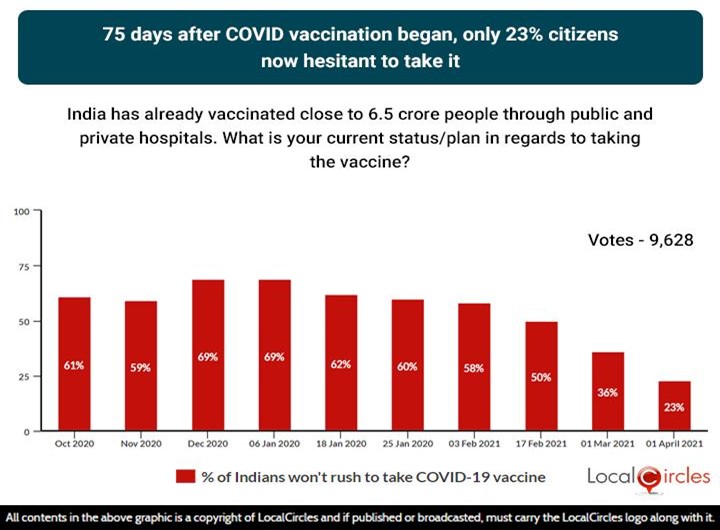 People inoculated with COVID-19 vaccines can face mild to moderate side effects like fever, fatigue, headache, muscle pain, chills, diarrhea, and pain at the injection site. The World Health Organisation (WHO) says that more serious or long-lasting side effects to vaccines are possible but extremely rare. To better understand from citizens who took the COVID-19 vaccine or had family members do so, the survey asked about the kind of side-effects they experienced. In response, 10% said “fever, body ache and soreness in the arm”, 5% said “fever and soreness in the arm”, and 13% said “body ache and soreness in the arm”. Only 2% of citizens reported that they had side effects more severe than soreness in the arm, body ache and fever while 1% opted for Can’t Say. At an aggregate level 52% of citizens said they “had absolutely no side-effects”. However, since 2% of citizens surveyed have said that they “had side effects more severe than the ones above”, research must be strengthened into these cases as it will help in improving updates to the vaccine as well as ensuring vaccine protocols take such cases into account especially if there are patterns. This poll in the survey received 9,501 responses. 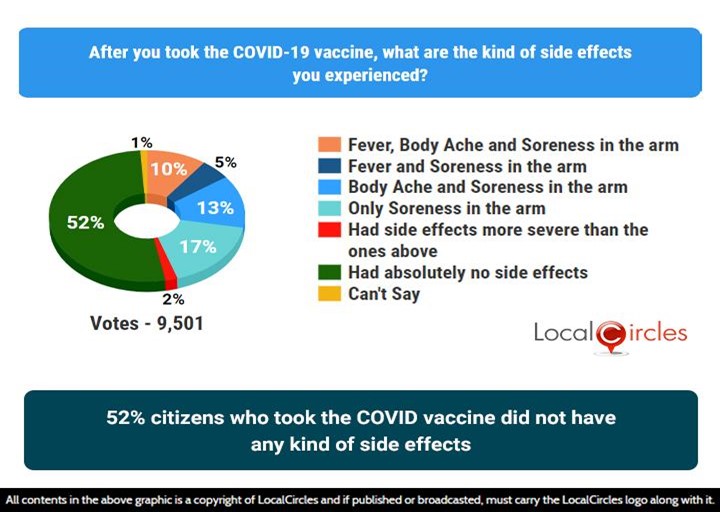 In terms of people’s preference, Covaxin currently has a slight edge over Covishield

It should be noted that citizens of India aren’t given an option to choose from either Covaxin or Covishield vaccines to get inoculated. However, LocalCircles observed in its online communities people seeking information about where they could get a particular vaccine type. To understand if there was a preference that people had for one over the other, it asked citizens about their preference. In response, 25% citizens said “Covishield”, and 33% said “Covaxin”. Breaking down the poll, the majority of 37% of citizens said they “don’t have a preference”. There were only 5% of citizens who maintained that they “would wait for other vaccines to come”. The findings of the survey indicate thatslightly higher percentage of citizens currently have a preference for Covaxin as compared to Covishield. This may be due to the restrictions that some countries have placed on the Oxford-AstraZeneca vaccine in regard to some of their population. Earlier in the week Canada stopped vaccinating its citizens under 55 with the Oxford-AstraZeneca vaccine. Covishield is the brand of Serum Institute of India for the Oxford-AstraZeneca vaccine in India. On the other hand, Brazilian regulator denied permission to import Covaxin during the week stating its manufacturing facility fails to meet Current Good Manufacturing Practices (CGMP) standards. This poll in the survey received 8,432 responses. 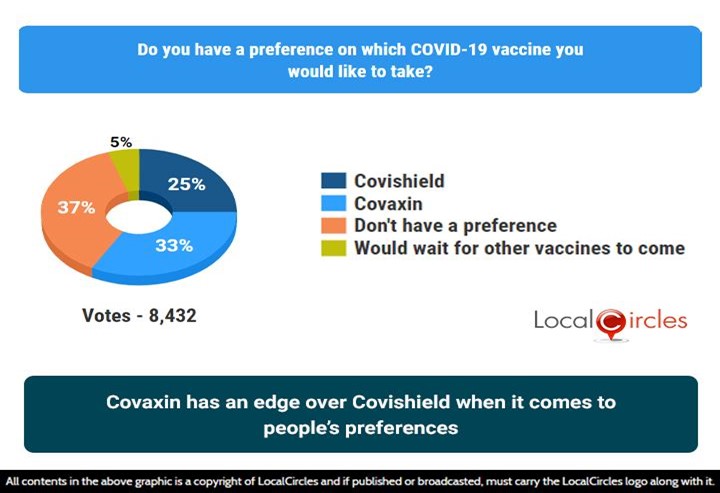 In summary, the good news here is that vaccine hesitancy has dropped to its lowest level partly due to increasing number of people now having someone in their social network who has taken the vaccine, the leaders taking the vaccine and the latest rise in COVID cases in India now being reported at near 90,000 per day. On the side effects front, only 2% of citizens have reported severe side-effects beyond the fever, body ache, sore arm, etc. With enough supply of doses available, India must now consider opening vaccination for the 18-45 population. In a LocalCircles survey conducted last week, 75% citizens supported opening vaccination for this age-group in after-hours at private hospitals and labs, for a slightly higher charge such that the regular vaccination drive is not disrupted. Similarly, there are views that citizens have communicated on the LocalCircles platform where they have advocated about opening vaccination first for this age-group in districts with highest daily caseloads.