Only 6% citizens willing to visit theaters or multiplexes in the next 60 days; majority feel opening them is extremely risky

July 29, 2020, New Delhi: the COVID-19 cases in India are witnessing a steep hike everyday and the numbers in India have grown to over 1.4 million. Unlock 2.0 is set to end on Friday, July 31st, and the Government is in the process of formulating guidelines for Unlock 3.0, which will come into effect from 1st August. It is believed that among easing out other restrictions, Government may be considering reopening of gymnasiums and movie theaters.

LocalCircles conducted a survey to get collective pulse of people of India on reopening of gyms and multiplexes and if they would visit these places in the next 2 months. Survey received over 18,000 responses from 251 districts of the country.

In the first question citizens were asked if the Government opens multiplexes and movie theatres as part of Unlock 3.0, will they be going to watch movies in the next 60 days. In response, 32% said they will not go to a theatre or multiplex to watch a movie. Only 3% said they would go many times while another 3% said they will go once or twice.

Only 6% citizens willing to visit theatres or multiplex in the next 60 days; majority feel opening them is extremely risky 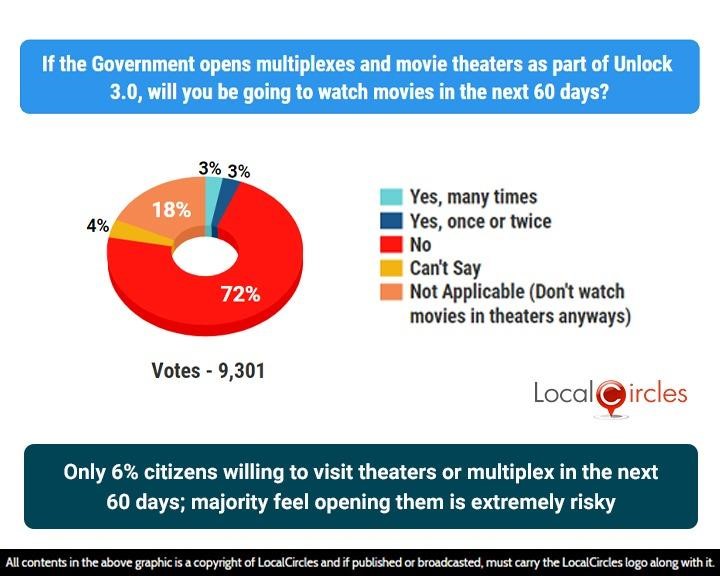 This means that only 6% citizens are willing to visit theaters or multiplex in the next 60 days and majority feel that opening them is extremely risky, given the COVID-19 situation. Although cinema hall owners have been asking for the reopening of theatres with 50% seating capacity, concern remains about the air-conditioning inside theaters leading to spread of the virus from asymptomatic but infected individuals. 80% or more cases in India have been asymptomatic. Per World Health Organisation communication issued in early July, there is now evidence that the virus may be airborne in indoor spaces.

OTT platforms are fast becoming the new way of consuming content, especially during the lockdown, when many shows and a few movies were released exclusively on some of these platforms.

In addition to the issue of movie theaters and multiplexes, people have been discussing the issue of opening up gymnasiums. With many lockdowns and movement restricted to just home, residents in societies and colonies have been urging their Resident Welfare or Home Owner Association to open the club house and the gym. Similarly, for many fitness conscious citizens, who have the membership to a local gym and have paid annual dues already, not being able to use the gym is a concern.

Only 9% citizens willing to go back to the gym in the next 60 days; many feel they shouldn’t be reopened 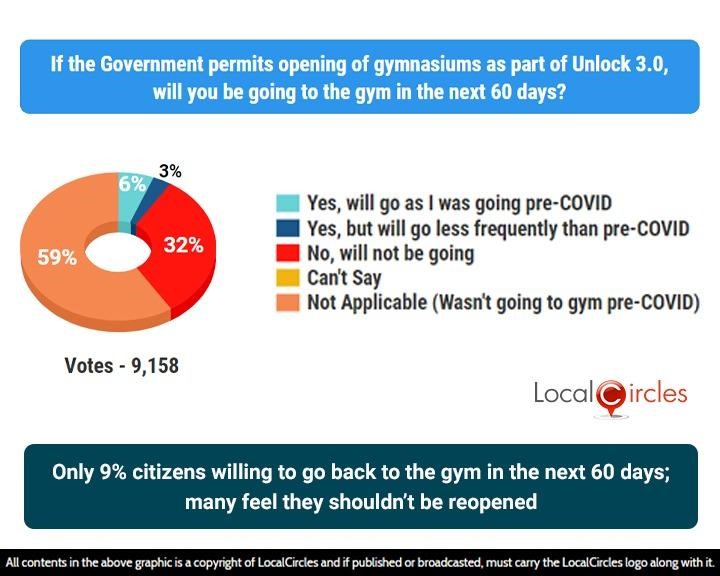 This clearly shows that only 9% citizens are willing to go back to the gym in the next 60 days and many feel they shouldn’t be reopened. The other concern that global infection experts have outlined in regards to opening up of indoor public spaces is that of poor ventilation which holds true for India. Most theaters and gymnasiums in India do not have adequate ventilation and could pose a major risk if they were opened.

Earlier, restaurants across the country were allowed to restart operation in Unlock 2.0 from 1st June, but the number of customers visiting these restaurants for dining in have been very small. This shows that majority of the people are not in a mood to be irresponsible when it comes to COVID-19 and the fate of gymnasiums and multiplexes might end up being the same, were they opened as part of Unlock 3.0.

So in summary, it appears that majority of the citizens will stay away from gyms and multiplexes even it they are opened in Unlock 3.0. LocalCircles will share the findings of this survey with the Ministry of Home Affairs so the same may be considered.