Only 25% citizens are clear about lockdown 3.0 rules

7th May 2020, New Delhi: The Ministry of Home Affairs has extended the COVID-19 lockdown till May 17. The Government has announced a host of relaxations in Green, Orange to restart economic activity. The Government also approved some economic activity in red zones as well. The MHA circular dated May 1st also permits all private offices in red zones to operate with 33% staff, permits industrial activity in EOU, SEZs, etc. related to a set of sectors to also restart. Permission has also been granted for neighbourhoods and standalone shops to open and cars and two wheelers to operate, though all with the condition of social distancing and limited capacity norms being followed.

After the detailed MHA order, all State Governments and many District Magistrates or Collectors have also issued orders pertaining to their district. This has led to many citizens wondering about what is permitted, what is not and how should they go about their business as well as procuring certain products and services as a household that they postponed due to the 40 day lockdown. Given the citizen queries, LocalCircles decided to conduct a survey and better understand what people were going through. LocalCircles asked citizens if they were currently confused about what is permitted in their area in regards to functioning of local shops, eCommerce and business establishments. In response, 25% said they were totally confused while 34% said they were somewhat confused. Only 25% said they were completely clear about everything and 15% said they were not confused but had a small doubt.

Only 25% citizens are clear about lockdown 3.0 relaxations in their area 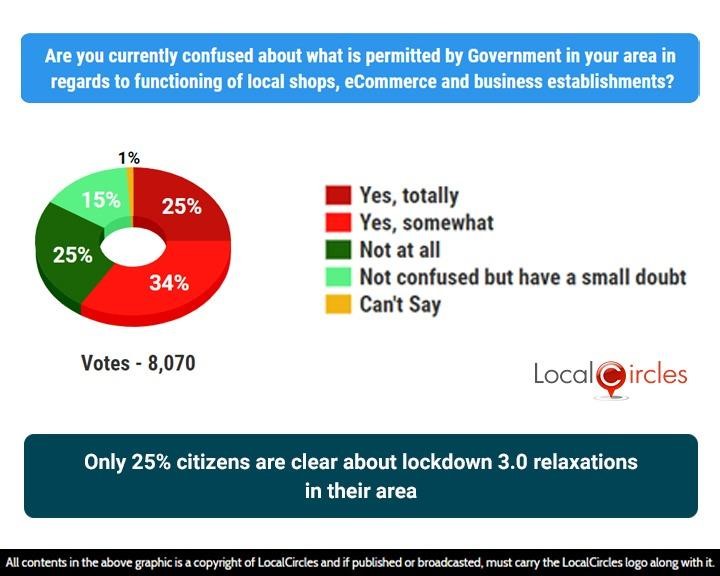 Many citizens have also raised the issue about state and local notifications being issued in languages without an English copy making them hard to understand for many. People want notifications to be in English as well as the common state language. 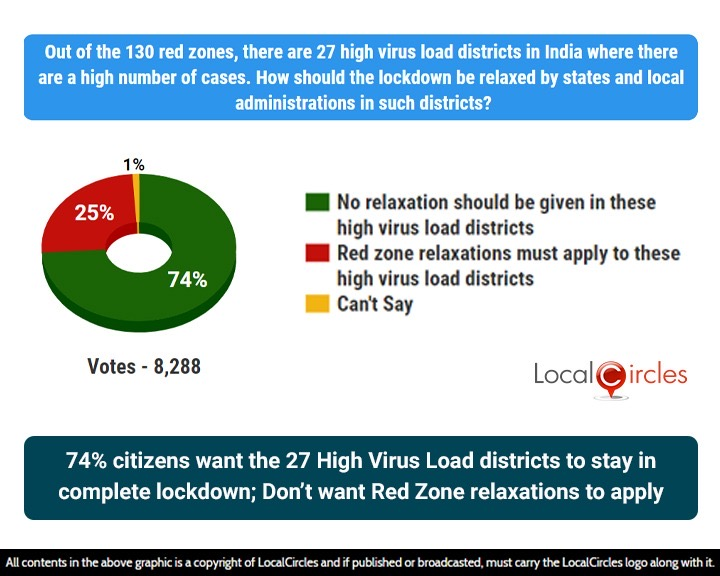 To put the citizens concern in perspective, on May 4th, Mumbai alone reported 510 new cases of COVID-19. The concern that citizens have is with such a high number of cases, any relaxation in lockdown will lead to much faster propagation of the virus resulting in a large number of cases in such high load districts in the coming weeks. As many liquor vends opened after almost 40 days, all the social distancing norms were flouted as large crowds gathered and people in big numbers queue outside a liquor shop. This might lead to an increase in COVID-19 infections by many folds. At the national level, on May 4th India reported 3656 new cases, highest single day number since the COVID-19 outbreak in India.

MHA has currently identified 130 districts as red zones of which these 27 high virus load districts are a part. Many citizens have specifically stated that given the urgent need to restart economic activity, a close watch must be kept on all these districts and as soon as they fall into regular red zone, category, the relaxations should start applying.

LocalCircles will be escalating these findings to all key stakeholders in the Central Government and various State Governments so they can be considered and if found fit, be incorporated in the lockdown management model of these 27 high load districts.