From Lockdown 1.0 to Unlock 1.0: 166% rise in number of Indians that are feeling anxious or worried

June 9, 2020, New Delhi:India has now overtaken Spain to become the 5th worst-hit country by Coronavirus, with the numbers of infected crossing 2,50,000. When the curve in many countries has started to flatten, India is still witnessing record single-day spikes in the number of patients. With the Government now announcing unlocking of the country in three planned phases, citizens are getting anxious due to the growing numbers of COVID-19 cases.

LocalCircles conducted a survey to get a citizen pulse on how they are feeling about the opening up of most activities. The survey received over 17,000 votes from 211 districts of the country.

In the first question, citizens were asked with COVID-19 cases in India hitting new peaks each day, how do they feel about opening up of most activities via Unlock 1.0. in response, 27% said it will likely lead to significant uptick in cases and complete lockdown should have been implemented in High Virus Load districts to control the virus, while 52% said it will likely lead to significant uptick in cases but we as a nation do not have the option of staying locked any more. 12% said that the peak is almost here, and cases will reduce from here so unlocking makes sense. Only 6% said that we shouldn't have locked down in the first place at all and just learned to live with the risk of the virus.

79% citizens feel that Unlock 1.0 will lead to significant uptick in cases 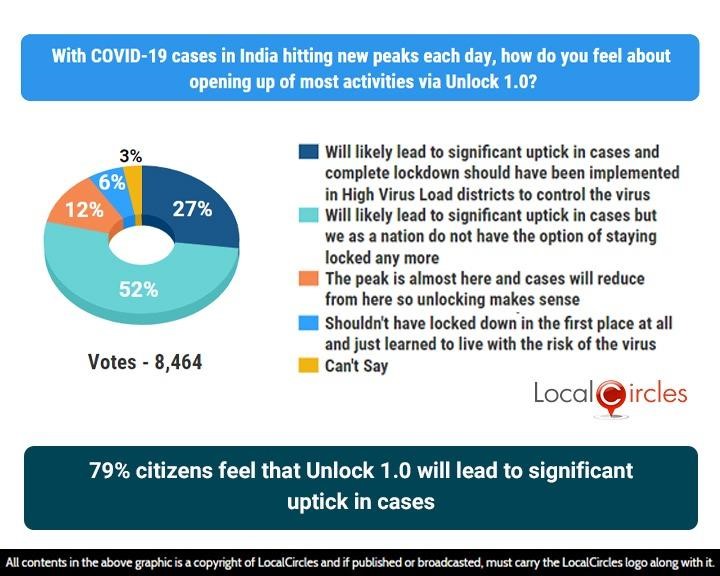 This means that 79% citizens feel that unlock 1.0 will lead to a significant uptick in COVID-19 cases in India. Maharashtra, Tamil Nadu and Delhi have so far been leading the infamous chart of having the most number of COVID-19 cases in the country.

People feel that enough testing is not being done by the Government due to which a large number of cases are still going unnoticed. LocalCircles received several complaints where an asymptomatic individual was denied testing with reasons cited as we don’t have enough kits or that they have been told only to test people with severe symptoms. Some citizens are increasingly feeling that the daily positive cases being reported are being controlled by some local administrations and State Governments by reducing the number of tests conducted so their district or state doesn’t have to report high numbers.

With Unlock 1.0, the in-person interactions with colleagues, neighbours, service providers, business partners, extended family, friends and others have increased or will increase. People were also asked what best describes how they currently feel. 56% said they were anxious or worried, 1% said they were bored, 10% said they were thankful, 25% said they were calm or peaceful, while 4% said they were excited.

With Unlock 1.0, 56% Indians are feeling anxious or worried 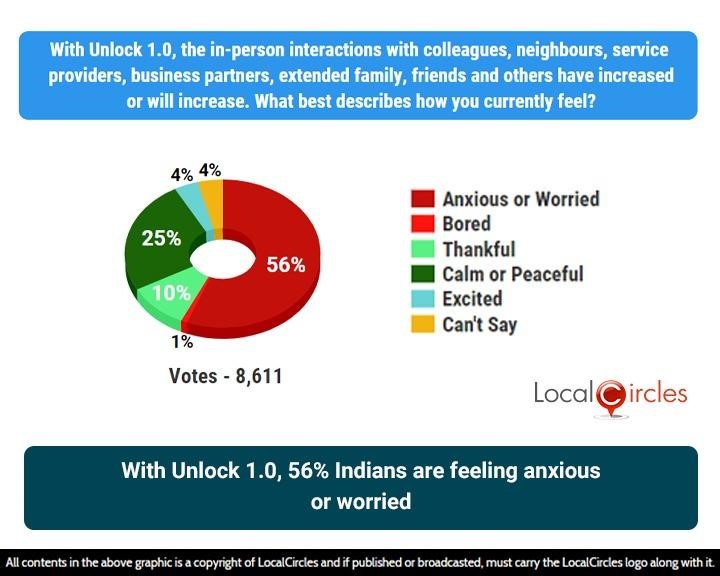 After the migration of workers from bigger cities to their native places, new cases are increasingly getting reported from rural areas. The comparison of the current numbers with those from early April when Lockdown 1.0 was in place pan India, show that the percentage of citizens that are feeling worried or anxious has risen by 166% between Lockdown 1.0 and Unlock 1.0, which shows the state of mental trauma and agony the fear of catching the virus coupled with testing and hospital accessibility is making people go through.

Percentage of citizens that are feeling worried or anxious rises by 166% between Lockdown 1.0 and Unlock 1.0 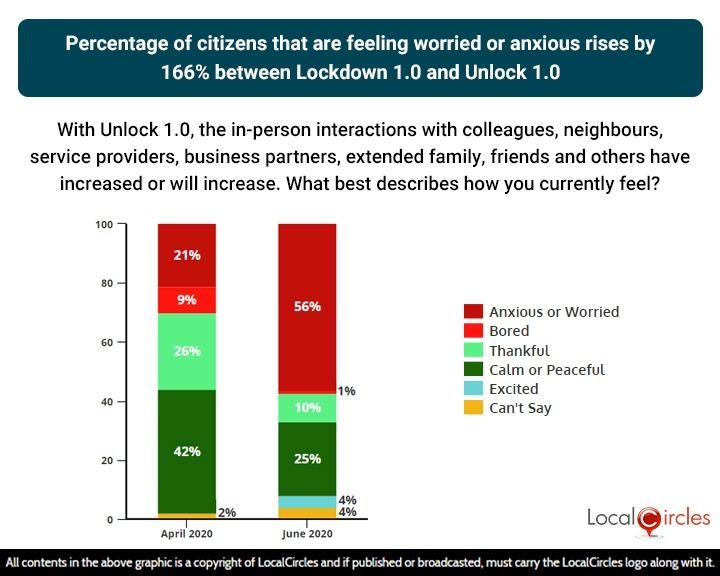 The situation in Mumbai, Delhi and Chennai seems to be the worst as reported by citizens in these cities. On one hand the State Governments are found saying that they have enough beds, the reality experienced by citizens is reported to be somewhat different. In several hospitals of Mumbai, there is major shortage of staff and hence a bed is not useful if a patient on it can’t be serviced or cared for. In Delhi, several cases have come to light where the helplines could not be reached, the hospitals bed availability was drastically different than what was advised on the helpline or the website of Delhi Government. Some private hospitals have also been reported to charge an upfront amount of 3 lakhs before even admission despite the various Government advisories and orders. Several State Governments have reportedly started directing people to home quarantine for Covid-19 patients with no or very mild symptoms in a bid to ensure that enough beds are available for critical care patients.

The survey results clearly point to the fact that with the Central and State Governments implementing Unlock 1.0, 56% citizens are feeling worried or anxious, a 166% rise from how they felt in early April during Lockdown 1.0. The need to the hour is for Government to evaluate if Unlock 1.0 makes sense for every district or the high virus load districts like Delhi, Mumbai, Chennai, Ahmedabad, etc. must be treated differently. Also, a serious plan needs to be drawn upon how the healthcare system should be scaled effectively if the daily case load rises from 11,000 to 20,000 within a few weeks. A clear message also needs to be put out stating “the lockdown has ended, the pandemic hasn’t and its getting worse” for there is a sizable group who feels Corona has ended with the lockdown ending.