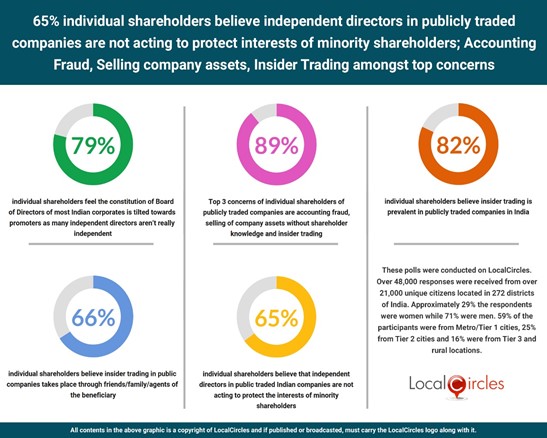 December 25, 2020, New Delhi: Corporations become a trusted force in the market when they follow effective corporate governance that adheres to a set of rules, policies, processes and laws to operate and are regulated or controlled by a trusted system. Practicing good governance can set businesses apart from competitors when it aligns the interests of the management with those of key stakeholders, shareholders, and its Board of Directors. Businesses that implement proper regulatory standards with regards to appointments, roles, compensation, evaluation of board of directors among others tend to prosper and earn higher levels of shareholder trust and in turn increase market capitalization than the ones who don’t. On the other hand, some companies perish because of weak corporate governance.

India has had its share of companies where weak corporate governance led to significant erosion of shareholder value as public markets punished them once the details of the fiasco became public. Satyam Computers, IL&FS, Punjab National Bank, ICICI Bank are just some examples where shareholders suffered because of governance failures or conflict of interest of management. Many of these corporations while on paper adhered to corporate governance codes for years, the reality was different and shareholders ended up facing the brunt of it.

The Board of Directors in a public company are responsible for implementing adherence to corporate governance standards while delivering shareholder value over time. Although independent directors of the board do not have material or pecuniary relationships with the company, it is encouraged that they be more proactive in guiding companies in a profitable, socially responsible and environmentally sustainable manner. According to Comptroller & Auditor General of India (CAG), an auditing body for government finances that also looks at company’s compliances and performance, has developed standards and guidelines for environment audit, research accounting among others, and has carried out audits on a case to case basis. 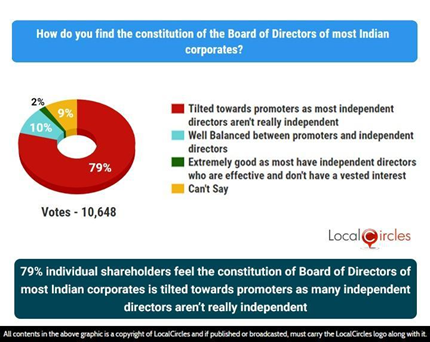 One of the other concerns raised by common shareholders in the public discussions is that of the paper directors i.e. independent directors at publicly traded corporations who exist merely on papers and who get their retainer fee while participating in just a few of the board meetings and many times just skipping them altogether. According to shareholders, in some corporations such independent directors are friends, family or associates of the promoters and rarely raise difficult and pertinent governance issues. 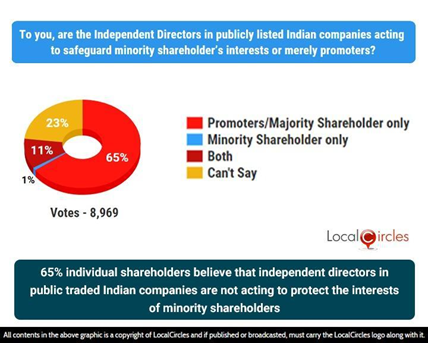 According to people, Independent Directors should ideally be a voice that represents, especially minority shareholders’ interest and be their representative to ensure that all corporate governance norms are being adhered to by the company. They should play an active role in reviewing the work of auditors as well as the legal and compliance aspects of the company such that risk and conflict of interests are minimised and well documented. If they play their role effectively, according to people, it will lead to an increased confidence among any company’s investors and shareholders, which in turn will have a positive impact on market capitalisation of the company. Cases like Satyam Computers and recently IL&FS were examples of accounting frauds where the management with external accountants and auditors was found to be involved in misstating financials, the Board of Directors did not effectively question that state of affairs. The common shareholders were asked, “As an ordinary shareholder of a publicly traded company, in which area do you perceive the highest risk exposure?” 40% said “Accounting Fraud'', 21% each voted “Insider Trading” and “Selling of company assets without knowledge of common shareholders” as the top-3 concerns of individual shareholders of the public traded companies. Further, 2% voted “Other violations (Bribery, Sexual Harassment, etc.)”. 4% responded with a Can’t Say. 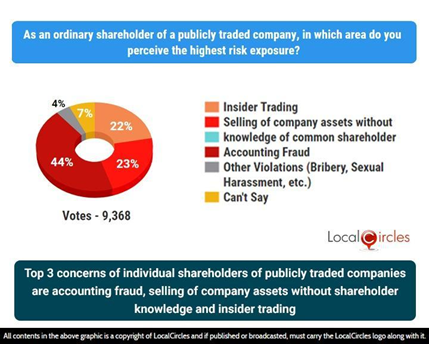 Insider Trading is the illegal practice of trading on stock exchanges to one's own advantage after having access to confidential information which is not available with the common shareholder. The SEBI Act and the Companies Act have specified strict penalties for insider trading, with fines of three times the amount of profits made out via insider trading, and imprisonment up to ten years or both. Insider trading can lead to big movements in the trading of the share to common shareholders’ dismay.

Over the last year, LocalCircles has received many concerns from citizens about the prevalence of insider trading and how it benefits a handful of people. When the common shareholders were asked “How prevalent do you think is insider trading in India?”, 10,173 responses were received. Of which, 49% voted “Extremely prevalent”, while 31% found it ‘Somewhat prevalent’, 3% believed it was “Quite Rare” while 1% said it “Doesn’t Happen at All” and 14% responded in a Can’t Say. Overall, 82% common shareholders believe that insider trading is prevalent in publicly traded companies in India. 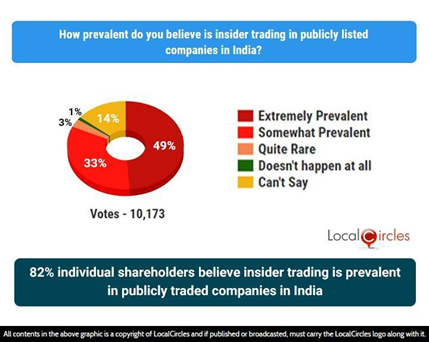 Citizens from time to time have raised issues on LocalCircles about insider trading being common and how quid pro quos are common when it comes to insider trading. Also, instances of indirect family and friends were cited and concerns were raised about these not getting tracked. When the survey asked common shareholders, “How do you believe the majority of Insider Trading takes place in publicly listed companies in India?”, 10,213 responses were received. Collectively 66% individual shareholders believe insider trading in public companies takes place through friends, family, staff or agents of the beneficiary, while 16% were of the opinion that it was done directly by the beneficiary. Only 2% voted, “Insider Trading is not prevalent at all” and 15% responded with a Can’t Say.

SEBI has implemented mandatory Insider Trading compliance codes for all listed company’s directors, vice presidents, managers, employees in finance and legal departments, personal assistants and secretaries of the company. Also, it has implemented a high-valued inter-market surveillance software, including Artificial Intelligence-based tracking mechanism to detect insider trading. The recent instance of Chennai-based Lakshmi Vilas Bank (LVB) is the latest to come under SEBI’s radar for alleged possibility that it violates disclosure norms, including insider trading rules. According to people’s perception though, insider trading is much more prevalent in India and a more proactive approach from SEBI could go a long way in minimising this malpractice. 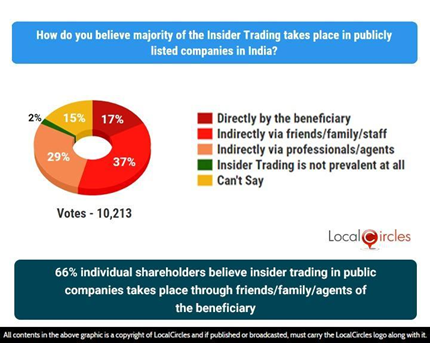 The above findings represent the pulse of common shareholders in India and provide regulators and corporates a plate full to act on. From ensuring that the independent directors are adding real value to the companies and looking after the interests of minority shareholders to ensuring that issues of insider trading are timely and effectively detected and acted upon. If these issues are addressed not only will Indian markets and corporates earn increased public trust they will see many more common citizens investing some of their savings in equities. Similarly, if corporate governance of Indian companies improves, it will most definitely attract an increasing number of foreign institutional investors into Indian markets.

LocalCircles will be escalating the findings of this study with the Ministry of Corporate Affairs and SEBI and any other relevant stakeholders so actions can be taken on them to improve corporate governance of Indian public companies.