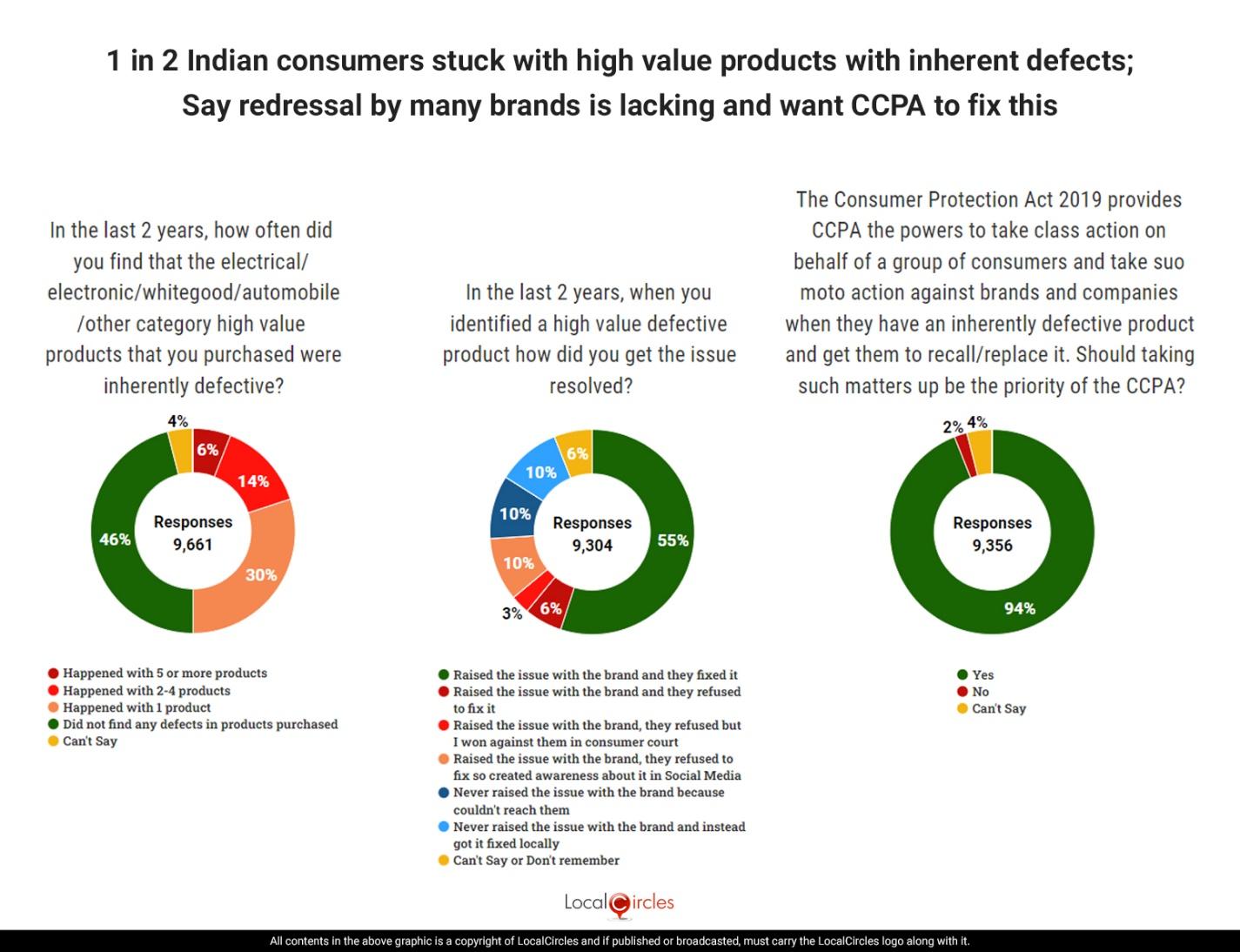 March 31, 2022, New Delhi: India has a huge base of consumers (middle-class and above) who buy a variety of high-value products, including automobiles, gadgets, whitegoods, consumer electronics, appliances, etc. Most Indian consumers generally only evaluate the product features, prices, discounts, look and feel and make their purchase decision. With eCommerce apps also now in the mainstream, some of these purchases happen based on comparisons with other products, reviews and ratings. Basis thousands of experiences received over the last 24 months by LocalCircles, it appears that the real battle for some consumers begins when they find the high-value product they bought is not functioning properly and has an inherent defect.

Those consumers who are aware resort to reaching the warranty department of the brand to find redressal while others get it repaired locally. Many others just end up using these defective products unless it is completely defunct. In only a handful of such cases, the warranty department responds quickly and the grievance is redressed within days while in a sizable number of them it takes a long time to sort out the issue. For instance, a brand new INR 100,000 laptop with a defective camera purchased from an authorised company distributor can take about 4 weeks for the consumer to get a replacement after multiple visits by company techs. The process is extremely unfriendly for the end consumer and is designed to minimise replacements, per the consumer feedback received by LocalCircles. While all this happens, the consumer’s functioning is disrupted, of course without any compensation or a spare device to use from the company.

From laptops to television sets and from automobiles to smartphones, the issue cuts across a large number of products. Passing a verdict in one of such cases, the Bangalore Urban District Consumer Disputes Redressal Commission directed a local firm to pay compensation for selling a defective product to a consumer, for their failure to replace the defective product despite repeated requests for about 6 months. In many such cases of laptops or television sets, what ends up happening is most consumers are unable to wait for redressal from the brand warranty or non-warranty process and either get the product repaired locally, which has consequences, or just buy a replacement.

To gauge the magnitude of the issue, LocalCircles has conducted a nationwide study to gather consumers’ pulse on getting a defective high-value product fixed or replaced. The study received over 28,000 responses from consumers residing in 355 districts of India. 63% of the participants were men while 37% were women. 49% of respondents were from tier 1 districts, 29% from tier 2 and 22% respondents were from tier 3, 4 and rural districts. 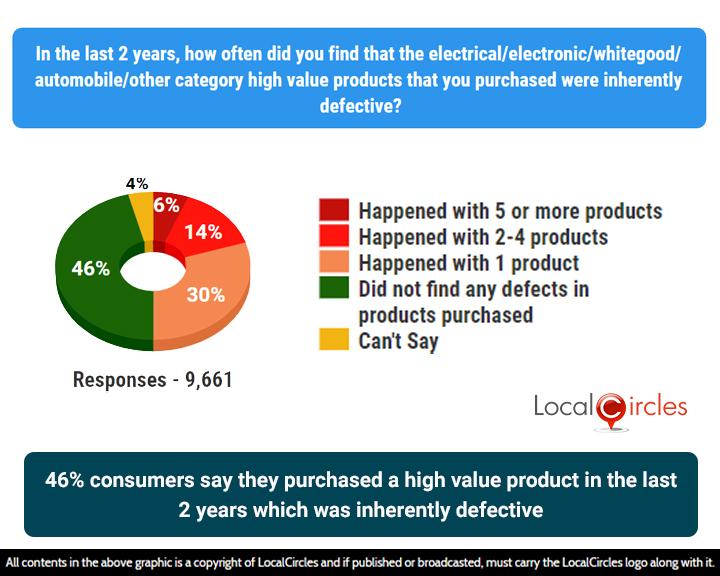 Of consumers who had a high-value product with inherent defects in the last 2 years, 3 in 10 could not find any assistance from the brand while 1 in 10 never even approached the brand and got it repaired locally 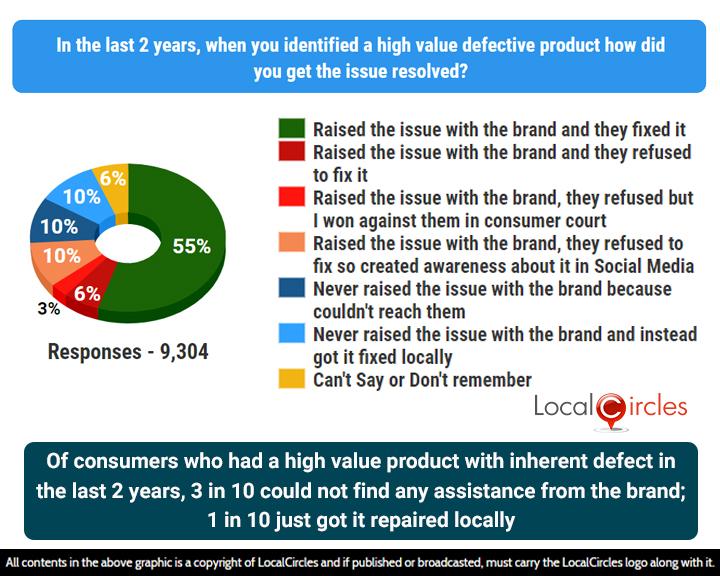 The Central Government via notification passed the Consumer Protection Bill, 2019, and constituted the Central Consumer Protection Authority (CCPA) to promote, protect and enforce the rights of consumers as a class. The CCPA would intervene to prevent consumer detriment arising from unfair trade practices and can also initiate class action, including enforcing a recall, processing refund, and return of products. The CCPA is also empowered to conduct investigations into violations of consumer rights, order recalls of unsafe goods and services as well as take a suo-moto cognisance against brands where a class of consumers is impacted due to a defective product or inefficient customer service. The CCPA has, in recent months, taken some actions against sellers of non-compliant pressure cookers and helmets as well as against misleading advertisements by penalising them and discontinuing sales and promotions of such products.

Given that the Consumer Protection Act 2019 provides CCPA the power to take class action on behalf of a group of consumers and take suo-moto action against brands and companies when they have an inherently defective product and get them to recall or replace it, the final question asked consumers if taking product defect matters should be a priority of the CCPA. In response, the majority of 94% of consumers said “yes” it should. Only 2% of consumers said “no”, while 4% did not have an opinion. This question in the survey received 9,356 responses. 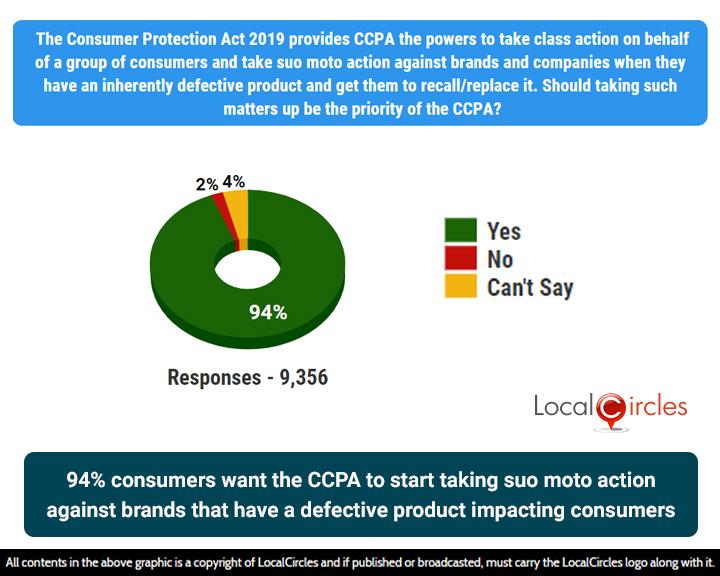 One of the key concepts that most brands in India fail to understand is the concept of fast and consumer-centric after-sales service. A large number of complaints are regularly received each month by LocalCircles against many brands selling whitegoods, appliances, electronics and gadgets. The majority of brands will go to whatever extent possible to deny a replacement to the consumer, even under warranty. Outside warranty service is mostly broken for most brands. In some cases, it takes weeks to just acknowledge a consumer complaint. In many other cases, something as simple as a toll-free number is hard to find for consumers and even after it is found and the consumer approaches it, the customer service agent remains elusive. Then there are the customer service hours and calls received after-hours are just not returned. Many consumers give up on such after-sale services and either get defective products repaired locally, buy a replacement, or just live with the defective product. All of this is evident in the study findings with 46% of consumers surveyed saying that they have purchased a high-value product in the last 2 years which was inherently defective. 3 in 10 of these consumers could not get the brand to fix it while 1 in 10 of them did not even bother reaching out to the brand and got it locally repaired.

According to consumers, the after-sale service is largely broken in India and the CCPA must start taking suo moto action against brands that have a large number of defective product complaints. This has the support of 94% of consumers. The actions of CCPA should be such that they drive a culture change amongst brands to invest in after-sale service, for if they do this right, they could have happy consumers for life.

LocalCircles will share the findings of this survey with key stakeholders in the Central Government, the Ministry of Consumer Affairs and the CCPA for actions.

The study received over 28,000 responses from consumers residing in 355 districts of India. 63% of the participants were men while 37% were women. 49% of respondents were from tier 1 districts, 29% from tier 2 and 22% respondents were from tier 3, 4 and rural districts. The survey was conducted via LocalCircles platform and all participants were validated citizens who had to be registered with LocalCircles to participate in this survey.