Consumer spending to be robust in the next 3 months as many plan to spend on gadgets, white goods & travel

Mood of the Consumer: Consumer spending to be robust next 3 months as many plan to spend on gadgets, white goods & travel 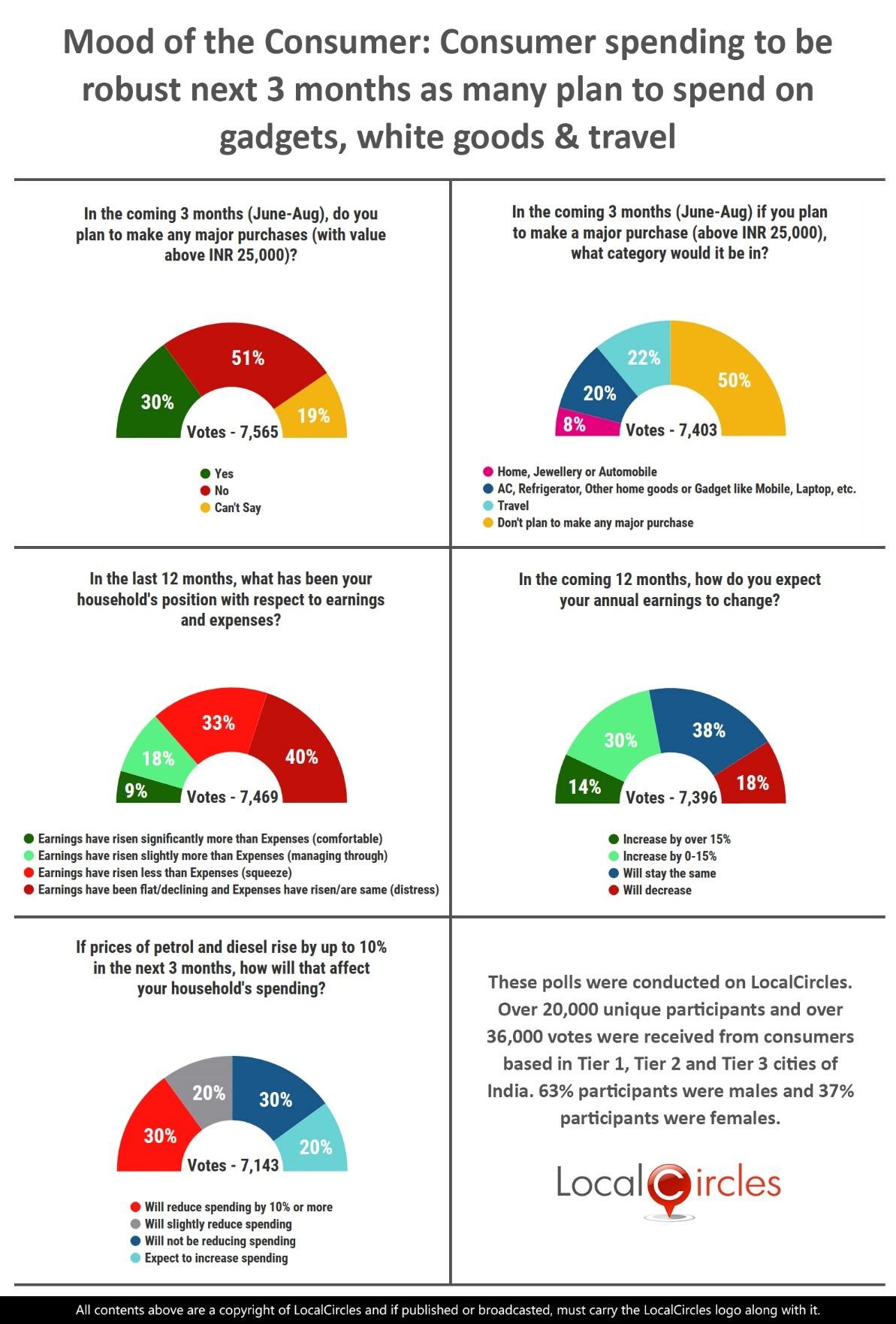 June 11, 2019, New Delhi: For many, the months of April and May mark the time for salary increments and bonuses which they plan to use to make those pending purchases for the family. This year, the month of May also gave us the results of the Lok Sabha elections 2019, where citizens handed over another session to PM Modi through a huge mandate. Both these things together, have led to positive sentiments amongst consumers as well as the market, and the consumer spending is expected to be robust in the next few months. LocalCircles conducted its bi-annual ‘Mood of the Consumer’ survey to check how they plan to spend in the next 3 months, which received more than 36,000 votes from consumers across India.

In the first question, consumers were asked if they were planning to make any major purchases in the next 3 months, with a value of above Rs. 25,000. 51% answered in a ‘no’ while only 30% answered in a ‘yes’. 19% said they are unsure about it.

30% consumers plan to make one or more major purchases(with value above INR 25,000) in next 3 months 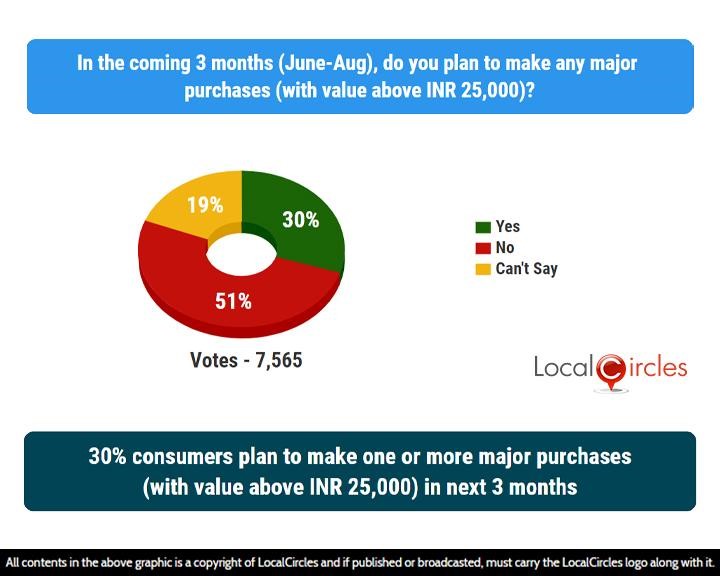 Next poll asked in which category will they make the purchase, if they decide to do so. 8% said home, jewellery or automobile, whereas 20% said AC, refrigerator or other home goods or gadgets like mobile, laptop etc. 22% said travel and 50% said they don’t plan to make any big purchases.

Travel, mobile/gadgets, white good are top areas of consumer spending in the next 3 months 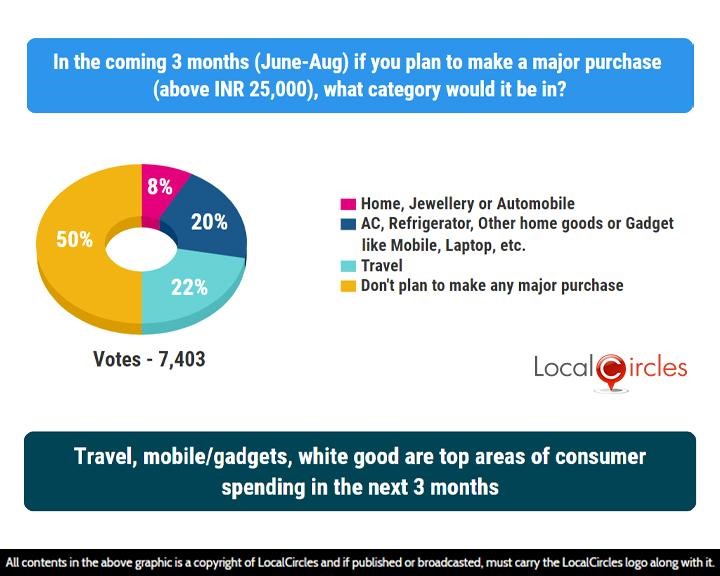 Gadgets like mobiles and laptops have been popular purchase items over the past few years and consumers have shown a tendency to upgrade them often. With disposable incomes increasing, travel has also emerged as an area when more and more consumers have been spending. And with the summer vacations going on, many consumers have plans to take their kids on holidays in India and abroad. 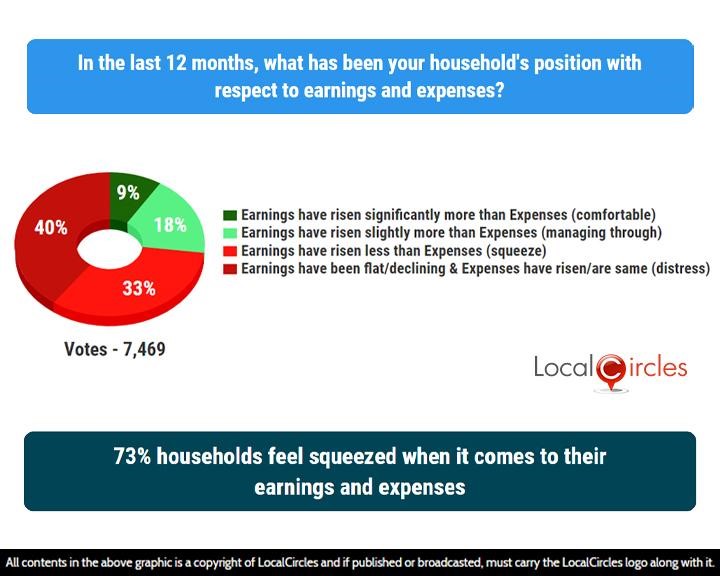 However, this indicates a worrying trend that 73% households are either feeling the squeeze or under financial distress. The number stood at 60% in September 2018 Mood of the Consumer survey of LocalCircles.

The economic growth stood 6.3% in the last quarter of 2018 and the year over year inflation rate stood at 5.24%. Having mentioned this, the consumer sentiments are quite positive due the re-election of the NDA Government and the outlook is good. 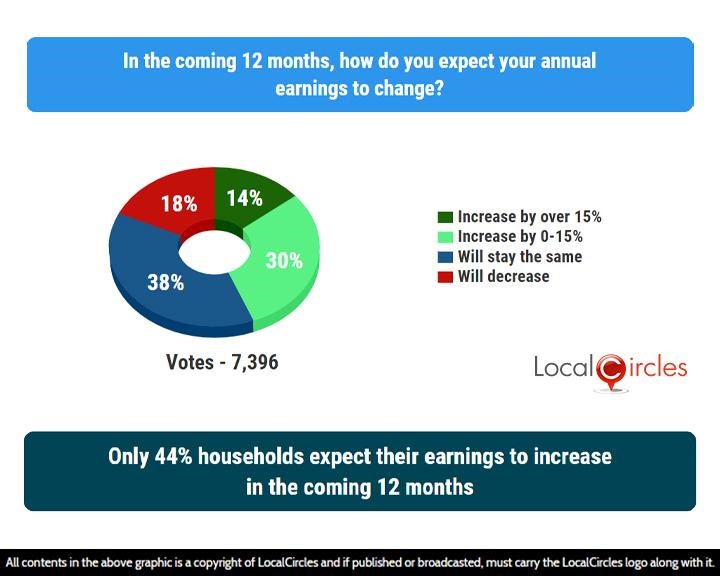 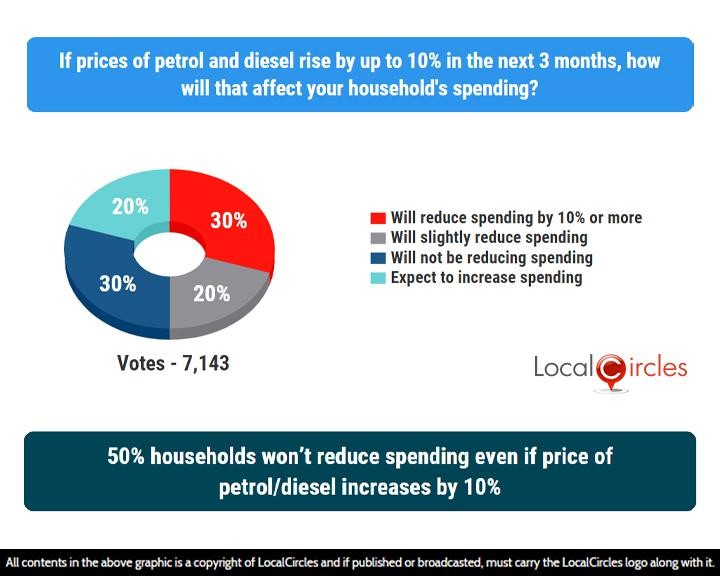 Overall, it appears that while in the next 3 months, the consumer spending will be robust in sectors like electronic gadgets, white goods and travels, the medium term outlook on earnings growth is concerning. This is something that can only be addressed with economic, business and public spending growth.

Over 36,000 responses were received from 20,000+ unique consumers located in 200 districts of India. Approximately 37% of the respondents were women while 63% were men. 64% of the participants were from Metro/Tier 1 cities, 28% from Tier 2 cities and 8% were from Tier 3 and rural locations.