Despite COVID vaccination being voluntary, over 1 in 4 say their local administration, companies and associations have made it mandatory 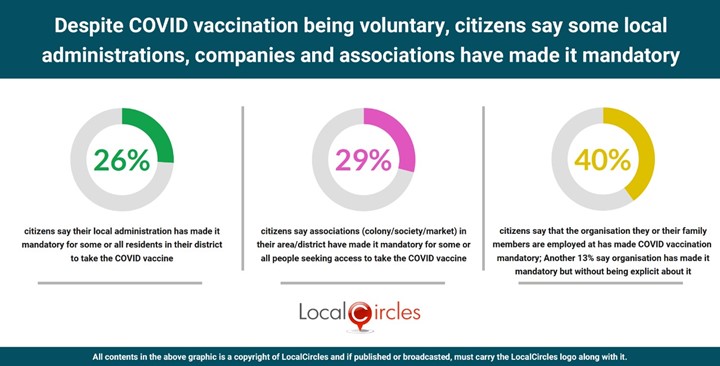 November 13, 2021, New Delhi: The Ministry of Health & Family Welfare via a counter affidavit filed in the High Court of Bombay at Goa on October 8th stated that, “Vaccination for COVID-19 is a matter of social obligation and is in larger public interest. As a responsible citizen looking to contribute in the nation and humanity's fight against the pandemic of COVID-19 infection, it is natural that every person would get her/himself vaccinated against COVID-19 in the community but this in no way implies that any person can be forced to be vaccinated against her/his wishes”.

However, citizens via LocalCircles for the last 4 months have been reporting that in some parts of India, the situation on the ground is a bit different. People have shared videos of rural locations where COVID vaccination is being forced upon people. In some districts, local health officials are going door to door to find the vaccination status of people and in some cases coercing them to take the jab. In July, small retail business owners and traders in some districts had reportedly said that they could not open their stores till they presented proof of their and their staff’s vaccination to the local administration. In some colonies and societies across tier 1 and tier 2 towns, staffers and vendors were daily asked to show proof of their vaccination for entry. The stance has been made even harder in Maharashtra, with the State Government's double vaccination rule, which earlier shut down malls due to non-compliance. At a district level in Maharashtra, people reported that the Aurangabad District Collector has ordered fair price shops, gas agencies and petrol pumps to only cater to citizens who have taken atleast one dose of the COVID vaccine. Similarly, the Thane Municipal Corporation announced salaries of its employees, officials and frontline workers who are unable to produce their first dose certificate would be held till they get vaccinated.

According to the LocalCircles survey conducted in October, approximately 7 crore Indian adults were hesitant to take the vaccine for various reasons, including medical reasons, religious beliefs or in some cases awaiting more data and newer vaccines. Some individuals have reported that they were coerced or forced to take the vaccine as not taking it would have cost them their livelihood. People have reported how several local administrations wouldn’t let store owners operate their stores in the market without them and their staff presenting proof of vaccination. People also reported camps being organised in markets where store owners were directed by the district administration to get vaccinated or face sealing/closure of their stores. Despite a clear guideline from the Ministry of Health & Family Welfare that COVID vaccination is entirely voluntary, some districts or local body administrations have been reportedly making the inoculation mandatory for a certain section of the population. For example, one of the local authorities in Shillong had issued an order for shops to place a prominent sign or poster indicating the COVID vaccination status of proprietors, shopkeepers and staff on the shop premises.

The first question in the survey tried to understand from citizens residing across India if their local administration is making it mandatory for citizens to take the COVID jab. In response, 14% said “Yes, for all” citizens it has been made mandatory, and 12% said “Yes, for categories of population, workers, or business owners”. The majority of 68% of citizens surveyed said “No, it’s clearly optional”, and 6% couldn’t say. On an aggregate basis, 26% of citizens say their local administration has made it mandatory for some or all residents in their district to take the COVID vaccine. This question in the survey received 9,930 responses. 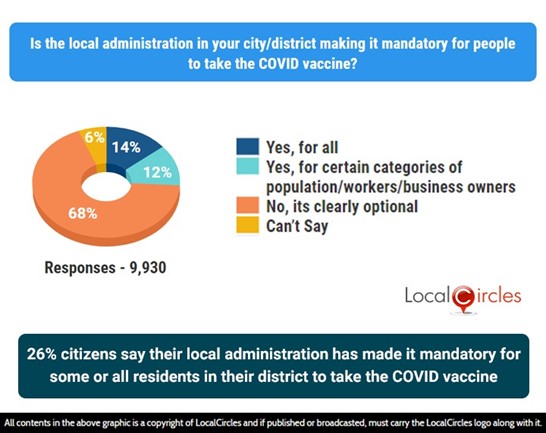 Citizens have also reported that some of the part-time staffers, daily wagers and vendors who work in colonies, societies or markets were denied access due to lack of proof of vaccination. Some schools have also mandated that only those children whose parents are vaccinated can come to drop their children to school, blocking access for the unvaccinated. The LocalCircles’ survey has found out from 29% of citizens that associations (colonies/societies/market) in their district or area have made it mandatory for some or all people to take the COVID vaccine. Of whom, 13% of citizens surveyed said it has been made mandatory for all citizens, while 16% said it is mandatory for certain categories of population or workers. This question in the survey received 17,414 responses. 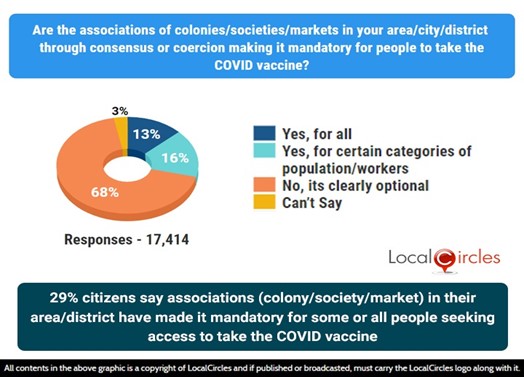 It can be mentioned here that a certain segment of the population in India is still hesitant in getting vaccinated. In the community feedback exercise, few individuals who haven’t taken the vaccine dose expressed their concerns about the efficacy of vaccines. Some members also expressed apprehensions about safety, quick clinical trials and rushed vaccine approvals. For some unvaccinated individuals, the side effects of the vaccine also remain a cause for concern. A few members with a medical condition cited their own situation and how possible blood clotting could be life-threatening for them. Some of the unvaccinated individuals also cited COVID going away as the reason for them to not get vaccinated. In addition to these concerns, there are also certain other myths and misinformation prevailing which are making people hold back from taking the vaccine.

When workplaces started to resume for employees in the aftermath of a significant decline in the COVID caseload post the 2nd wave of the outbreak, many offices across India had started advising employees to get vaccinated, even if return to workplace was delayed or staggered. Various companies also arranged vaccination camps at their offices to get the employees vaccinated. Some companies even paid incentives to employees to get vaccinated. The next question in the survey sought to know from citizens if the organisation where they or their family members are employed made it mandatory for all employees to take the COVID vaccine. In response, 40% said “yes”, and another 13% said “yes, without being explicit about it”. There were also 31% who said “no, it’s clearly optional”, and 16% said they “do not have clarity or can’t say”. This question in the survey received 9,506 responses. 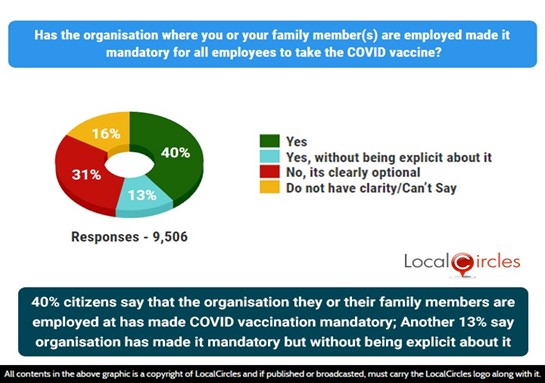 In summary, the findings of the survey indicate that despite the guidelines of the Ministry of Health & Family Welfare stating that vaccination is entirely voluntary, 26% of citizens say their local administration has made it mandatory for some or all residents in their district to take the COVID vaccine. Another 29% of citizens said their association (colony/society/market) in their area or district has made it mandatory for some or all people to take the COVID vaccine. There were also 40% of citizens saying that the organisation they or their family members are employed at has made COVID vaccination mandatory; another 13% say organisation has made it mandatory but without being explicit about it. Feedback from unvaccinated citizens via a LocalCircles study on vaccine hesitancy indicates that vaccine hesitancy in India after dropping to its lowest level in early October may be rising again due to cases staying low and such coercive or forced vaccination activity on the ground in some parts of the country. According to those hesitant, the COVID vaccine production started less than a year ago and most vaccines were developed in less than 12 months and that is one other reason for some of those hesitant to not take the vaccine. This, along with the constant change in the period of time between the two doses, reports of adverse events and whether the current vaccines will protect against a future variant is why some people are still sceptical. Some others are unable to take the vaccine due to co-morbidities or a specific medical condition.

The focus of Central and State Governments via Har Ghar Dastak and other campaigns should be to share as much information through the awareness drives about the benefits of vaccination, how people with different medical conditions can take the vaccine and who should be cautious along with the nature of side effects of the COVID vaccine experienced by others who have taken the vaccine. In addition, awareness should be created amongst the hesitant about the mask and social distancing protocols. States or District administrations making it mandatory or vaccinating people by coercion or force is unlawful per the current guidelines and there is a need for immediate and effective communication from Central Government to all States and District Administrations such that people are not coerced or forced to take the COVID vaccine.