Though Air Quality Commission ordered restrictions for Delhi-NCR to control pollution, citizens say other than school/college shutdown, not much else was enforced on ground

November 22, 2021, New Delhi: Delhi’s AQI is now hovering in the “very poor” category after being in the severe category for weeks as residents of Delhi and adjoining areas of the National Capital Region continue their struggle with toxic air. The LocalCircles study released on Nov 15th found that 86% of families in the Delhi-NCR region have someone experiencing 1 or more ailments due to polluted air. These include sore throat, cough, congestion, burning eyes, headache and breathing difficulties.

To limit the air pollution in the Delhi-NCR region, Commission for Air Quality Management (CAQM) mid last week ordered a set of measures to be implemented with immediate effect including shutdown of schools, colleges, educational institutions etc., ban on diesel generator sets, ban on construction, deployment of water sprinklers and anti-smog guns and Work from Home for 50% of staff, etc.

Since the order, citizens have been discussing the CAQM order and compliance and non-compliance of the order and discussing school closures along with other measures announced. To understand the effectiveness of the order implementation, LocalCircles conducted a survey. The survey also asked residents about the potential implementation of the Odd-Even scheme as a solution to the pollution in case the situation does not improve. The survey received over 19,000 responses from residents of Delhi, Gurgaon, Noida, Ghaziabad and Faridabad. 64% respondents were men while 36% respondents were women.

Though air commission ordered restrictions for Delhi-NCR, citizens say other than school/college shutdown, not much else was enforced on ground

When asked about the implementation of directives by air commission, only 8% citizens said that restriction on construction and demolition work was enforced, only 8% said restriction on DG set usage was enforced. Also only 8% said work from home for 50% staff was being enforced. Only 17% of Delhi-NCR residents said water sprinklers and anti-smog guns were deployed. However, 59% of citizens said that closure of all schools, colleges and institutions was brought into effect. Over 11,000 responses were received and respondents had an option to pick multiple things that were implemented.

The Delhi Government had said last week that it may propose introduction of Odd-Even as a solution to the pollution is the situation does not improve. Also, in response to the suggestion by Chief Justice, it said it may also consider a full lockdown for a few days. When residents of Delhi-NCR were asked about their views on introduction of the Odd-Even rule, only 35% of residents said “Yes” and were in favour, and 57% citizens said “No” and opposed to the rule. 8% did not have an opinion. This reveals that the majority of residents of Delhi-NCR are not in support of the Odd-Even vehicle rule as a solution to air pollution. This question in the survey received 8,225 responses. 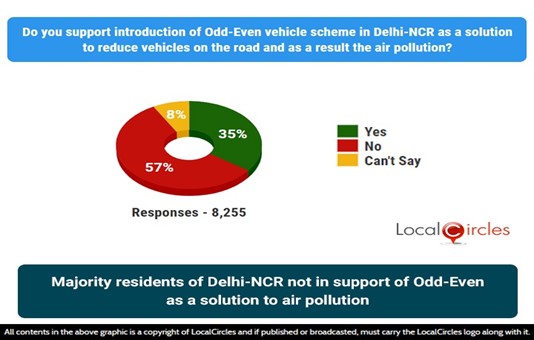 Last week when LocalCircles had sought inputs of residents of Delhi-NCR on the introduction of 3 days of complete lockdown to curb hazardous air quality. In response, 48% said “Yes”, and 52% said “No” indicating an almost even split about implementing a 3-day lockdown.

In summary, majority of residents of Delhi-NCR region are of the opinion that the CAQM orders are not being implemented effectively on ground and Odd-Even rule is not a solution to address the pollution woes of Delhi. The focus of the CAQM and the three state Governments according to people should be to rationalise the measures and then ensure their implementation as a solution to control air pollution.

19,000+ responses were received from residents of Delhi, Gurgaon, Noida, Ghaziabad and Faridabad. 64% of the respondents were men and 36% of them were women. The survey was conducted via LocalCircles platform, and all participants are validated citizens who had to be registered with LocalCircles to participate in this survey.