As vaccination drive progresses, the challenge for people shifts from getting an OTP to getting an appointment slot

March 5, 2021, New Delhi: Government of India on the first day of this month rolled out the second phase of its most ambitious COVID-19 vaccination drive across India for senior citizens and those above age 45 with co-morbidities along with vaccination by roping in close to 24,000 private hospitals. However, as people tried to register themselves for vaccination via the CO-WIN site or the Aarogya Setu App, many had difficulty getting an OTP or finding an appointment. LocalCircles conducted a survey on March 1st which received over 14,000 responses and found that only 8% of those who tried to get the COVID-19 vaccine appointment using CO-WIN site or Aarogya Setu app were able to do so.

Now with 4 days of citizens interfacing with the CO-WIN system and the Aarogya Setu app, LocalCircles has conducted another survey in an attempt to understand if issues with CO-WIN site or Aarogya Setu app still persist. The survey received over 8900 responses from citizens located in 204 districts of India.

Only 20% of those who tried to get the vaccination appointment were able to do so; OTP is no longer a big challenge but getting an appointment is

Only 20% of those who tried to get the vaccination appointment were able to do so; Big challenge no longer OTP but getting an appointment 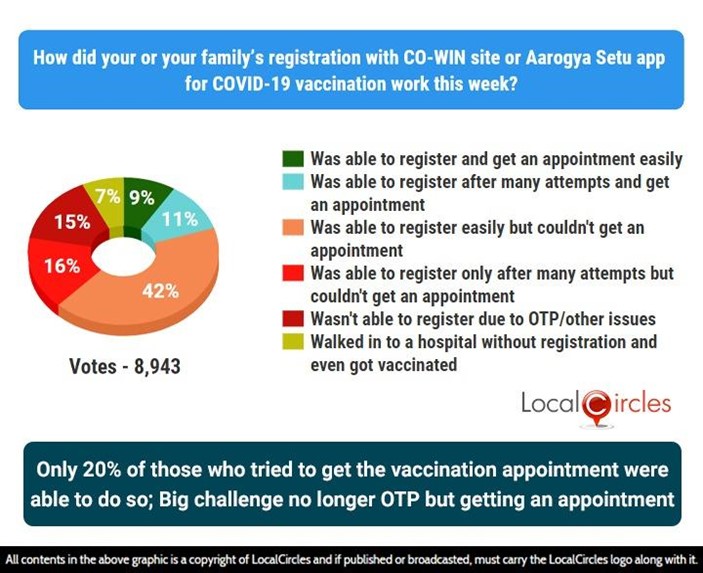 It can be mentioned here that many citizens were frustrated over delays in the registration process due to glitches. The CO-WIN portal was lagging at several sites, with some hospitals unable to start registrations for hours. The survey that alternatively tried to look into how citizen and their family registration with CO-WIN site or Aarogya Setu app for COVID-19 vaccination worked this week, 20% “could get the appointment”, 58% “could not get an appointment”, and 15% “could not get the OPT or faced other issues”. On the other hand, 7% “gave up on CO-WIN and did walk in”. The findings of the poll indicated that OTP is no longer a CO-WIN bottleneck, but finding appointment is, as many hospitals failed to upload them. 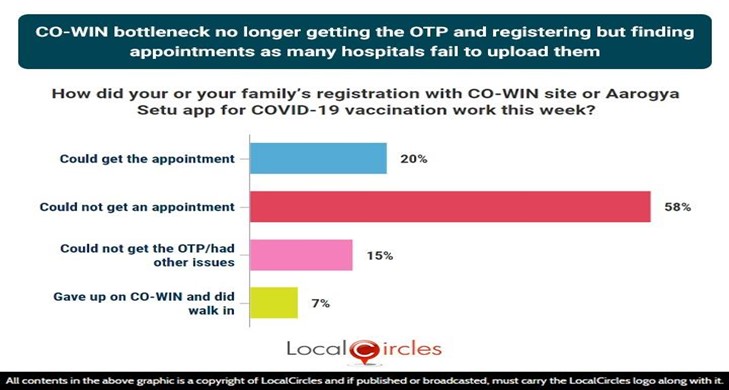 Similarly, another perspective of looking into how citizen or their family’s registration with CO-WIN site or Aarogya Setu app for COVID-19 vaccination worked this week, indicated that citizens who could not get an appointment increased from 29% to 58%, whereas citizens who could not get the OTP or had other issues has reduced drastically from 50% in the March 1st 2021 survey to 15% in this survey. 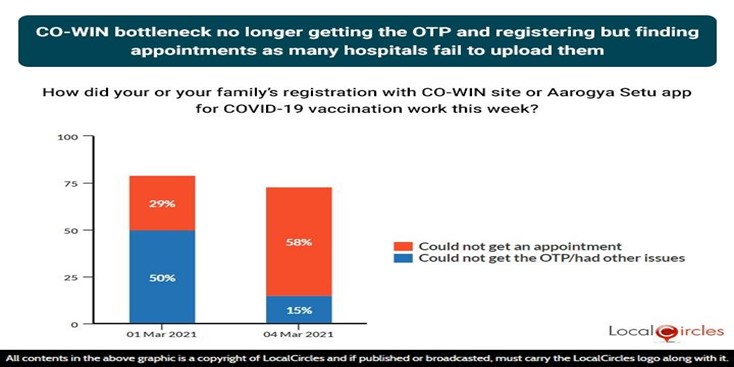 The survey result indicates that finding appointments for registration for senior citizens and those above age 45 with co-morbidities in the second phase of COVID-19 vaccination drive, using the CO-WIN or Aarogya Setu app, continues to be a frustrating experience for many. At a time when the Prime Minister and many Central and State Government leaders across the country have taken the vaccine and the vaccine hesitancy is lowest till date, it is critical that the CO-WIN system is used by all and is functioning effectively. The challenge for the Government is ensuring smooth functioning of the CO-WIN site and Aarogya Setu app as well as ensuring that hospitals are uploading their details as well as vaccinations completed and slots available. Many citizens reported on LocalCircles that after the CO-WIN site did not work they gave up and walked into the hospitals and got vaccinated easily. For them the CO-WIN site basically did not even come in the picture.

In addition to CO-WIN, the other challenge would be ensuring that there is no black marketing and over charging on administering the vaccine. Hospital management and Doctor discretion is also something that must be minimised so only the qualifying individuals get the vaccine. It was reported on LocalCircles that during the healthcare worker vaccination or Phase 1 vaccination, many of the Doctors got their families vaccinated, who weren’t necessarily working in the healthcare sector. With so many private and Government hospitals now involved, if traceability and accountability go missing, some of the qualifying senior citizens or those with co-morbidities could be pushed down in the queue by friends and family of the healthcare professionals and the VIPs.