March 2, 2021, New Delhi: Adding a push to the Government of India’s move to the COVID-19 vaccination drive that has already inoculated more than 1.7 crore or 17 million citizens, private hospitals have started the drive from Monday onwards to inoculate people above the age of 60 and those with co-morbidities above the age of 45, although there were teething issues to get beneficiaries registered using the CO-WIN site app. The Prime Minister Narendra Modi on Monday morning was also seen taking the Covaxin developed by Bharat Biotech, which in a way, has played a role in reduce vaccine hesitancy amongst citizens.

LocalCircles has been collecting responses from citizens to know their willingness to take the COVID-19 vaccine, aimed to understand if the percentage of reluctance or hesitancy has increased, reduced, or is unchanged. The survey released on February 19th 2021, indicated a 20% drop in vaccine hesitancy within a month with 50% willing to take the vaccine. Prior to that, another LocalCircles survey on February 4th 2021, had indicated that 39% of hesitant citizens were willing to take the COVID-19 vaccine if senior leaders in Central and State Government, their MPs and MLAs are inoculated.

On March 1 as the vaccination drive began, many citizens reported issues with the CO-WIN site and Aarogya Setu app when registering for vaccination. To quantity the issue and to measure vaccine hesitancy post the Prime Minister and several Government leaders taking the jab, LocalCircles conducted a survey which received over 14,000 responses from citizens located in 221 districts of India.

As the Prime Minister takes the jab and COVID-19 vaccination begins at private hospitals, vaccine hesitancy drops to 36%

Now that the Prime Minister Narendra Modi has taken the first dose of Bharat Biotech’s Covaxin, the survey tried to measure the hesitancy level of citizens. The first question asked citizens, “India has already vaccinated more than 1.5 crore people and now the vaccination via private hospitals has also commenced. The Prime Minister has also taken the vaccine. What is your plan to take the vaccine?” 7% “have taken one or both doses”, 17% “will be taking the vaccine very soon”, 40% said they “will be taking the vaccine as soon as I become available. Breaking down the poll, however, 15% of citizens “will wait up to 3 months”, 7% “will wait 6 or more months” and then decide. There were also 7% of citizens who said they “will not take it at all”, while 7% couldn’t say. The findings of the poll suggested that as the Prime Minister takes the jab and COVID-19 vaccination begins at private hospitals, vaccine hesitancy drops to 36%. The question in the poll received 7,797 responses.

As the Prime Minister takes the jab and COVID-19 vaccination begins at private hospitals, vaccine hesitancy drops to 36% 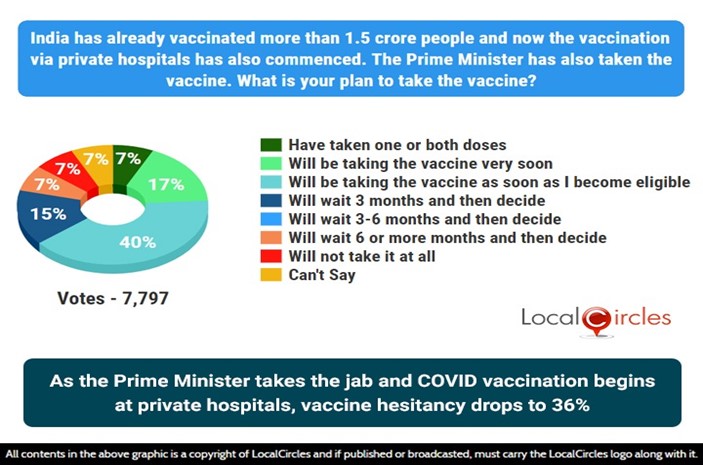 45 days after COVID-19 vaccination began, only 36% citizens now hesitant to take it

The last LocalCircles vaccine hesitancy survey released on February 19th, 2021, indicated that 50% of citizens were still hesitant to COVID-19 vaccine immediately. As more people started to take the jab, amid the decline in COVID-19 caseloads, hesitancy amongst citizens has reduced to some degree. This week, the percentage of hesitant citizens stands at 36%. The percentage of citizens hesitant to take the vaccine was 62% at the end of the second week when vaccination began to 60% in the third week of January 2021. The hesitancy level then dropped to 58% in the first week of February 2021 to 50% in the second week, and is at 50% this week. This means that vaccine hesitancy amongst citizens in the aftermath of 45 days after COVID-19 vaccination began, only 36% citizens are now hesitant to take it. 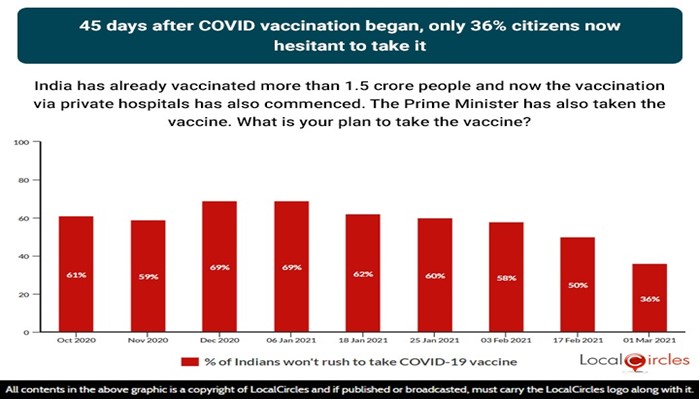 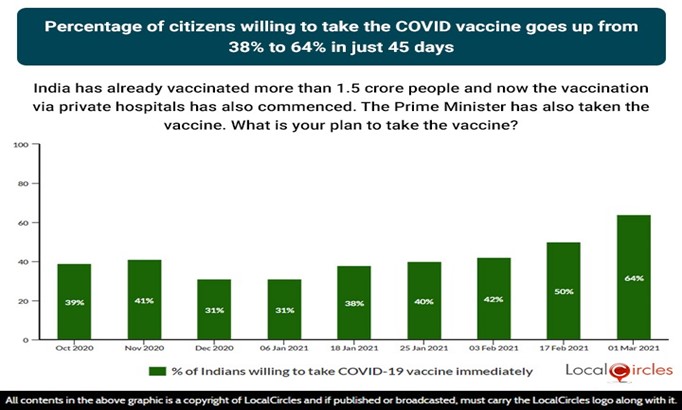 The next question in the poll asked citizens “How did you or your family's registration with CO-WIN site/app for COVID-19 vaccination work?” 13% said “failed to access the site/app”, 50% said “OTP/SMS registration didn’t work”, 29% said “registration worked but no appointments were showing”. Notably, only 8% of citizens said they “were able to book the appointments successfully”. The aggregate responses of citizens in the poll indicated that 92% of citizens faced issues with CO-WIN website or app for registering to avail of the vaccine, on the first day of the second round of vaccination drive that commenced on March 1st 2021. 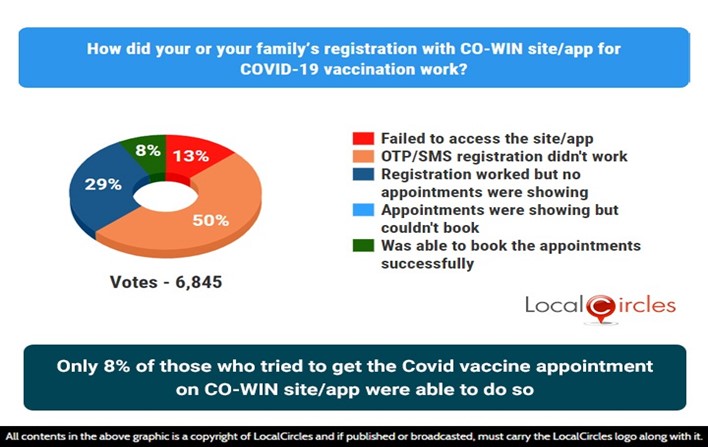 In summary, the vaccination hesitancy in India is consistently reducing week-over-week, with only 36% of citizens now reluctant to take the jab. With the Prime Minister and several Ministers taking the shot earlier this week and many more Ministers expected to do so in the coming days, it is expected that hesitancy will continue to decline.

The challenge for the Government will be ensuring smooth functioning of the CO-WIN site and Aarogya Setu app as well as ensuring that hospitals are uploading their details as well as vaccinations completed and slots available. Many citizens reported on LocalCircles that after the CO-WIN site did not work they gave up and walked into the hospitals and got vaccinated easily. For them the CO-WIN site basically did not even come in the picture.

In addition to CO-WIN the other challenge would be ensuring that there is no black marketing and over charging on administering the vaccine. Hospital management and Doctor discretion is also something that must be minimised so only the qualifying individuals get the vaccine. It was reported on LocalCircles that during the healthcare worker vaccination or Phase 1 vaccination, many of the Doctors got their families vaccinated who weren’t necessarily working in the healthcare sector. With so many private and Government hospitals now involved, if traceability and accountability goes missing, some of the qualifying senior citizens or those with co-morbidities could be pushed down in the queue by friends and family of the healthcare professionals and the VIPs.