25 May, 2017, New Delhi: The recent survey report on 3 years of governance by LocalCircles brought to light 5 main areas of concerns for the citizens. These were women & child safety, unemployment, ease of doing business, price rise and cleanliness. LocalCircles went back to the citizens to ask them what the central government could do in their 4th year to make improvements in these areas. The results were quite interesting.

To understand solutions on this issue LocalCircles’ did another poll which shows that 57 % citizens wants creation of special courts for crimes committed against women and children for quick justice will curb this menace. Around 18% said states should create a special cadre for investigating such crimes and 14% said that crime against women and children should be handled by the central police forces. Another 11% suggested that like in western countries, a central repository of sex offenders should be created by the central government.

Lakhs of children every year are involved in either labour of are trafficked in different parts of India. Central government had put the safety of women issue at the top of its agenda and while the intensions were good, no real progress has been made in this area. 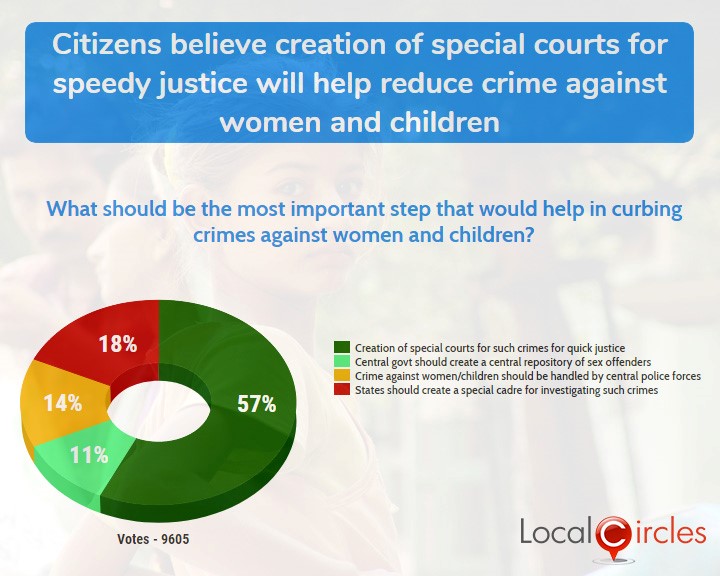 A previous LocalCircles poll showed that the percentages of people who believe that crime against women and children have not reduced have gone up from 44% last year to 60% this year, showing a remarkable resentment. 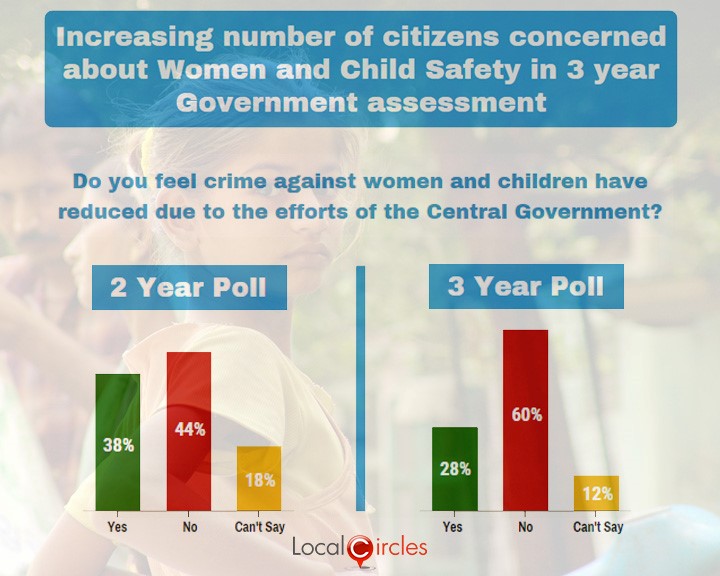 Citizens also participated in many structured discussion to suggest ways in which women & child safety could be improved in the country. These suggestions included improving electronic surveillance, quick actions taken in incidents related to women and children, involving more women in the panchayat, increasing women participation in law making, setting up a one-stop emergency helpline to help women/children in any distress etc. Government should focus on prevention, protection and prosecution.

On the completion of three years of NDA government, citizen engagement platform LocalCircles had done a massive poll on the performance of the government. One of the areas where citizens felt that massive improvement was required was on employment. Citizens feel that unemployment is not reducing in country in spite of economic growth.

Citizen engagement platform LocalCircles conducted a survey on solutions can have a positive effect on unemployment within the next 3 months. Around 29% said using robust tech to effectively match demand and supply would be an immediate solution. This is especially true for low skills jobs where the demand is local and aspirants are many. But they are unable to find these jobs because of any central database. This includes jobs in retail, construction, and logistics.

Another 28% said that making funding/loans accessible to SMEs and startups could be another good option. Another 23% voted for central/state government skills training to boost employment while 20% voted in favour of skills training provided by private industry. A total of 9564 votes were polled on this question. 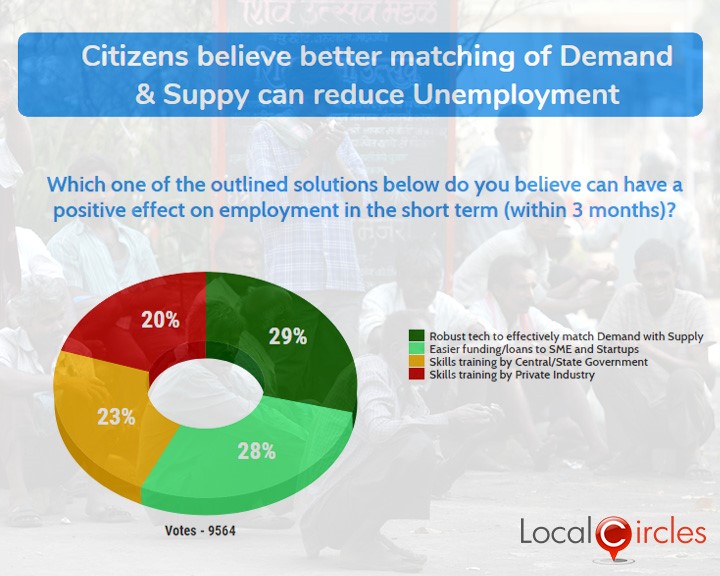 In an earlier poll, people were asked if the unemployment rate had reduced due to the efforts of the government in the last 3 years, to which 63% replied in a negative. This number was a sharp increase from the 43% citizens who said the same 1 year back. 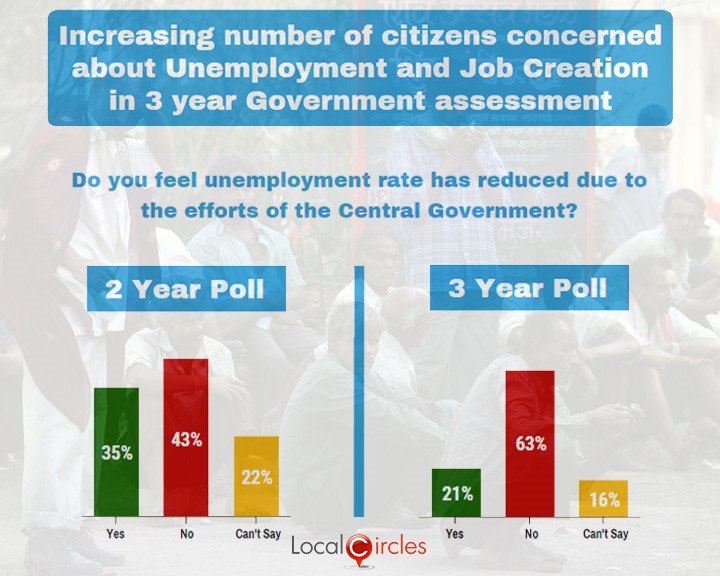 Many citizen suggestions came in on the topic of unemployment and how it could be reduced in the time to come. Some of the suggestions included each district having one employment centre which is directly managed by the state Government and are linked with the training centres, training centres being linked to the industrial belt, schemes like MNREGA should be expanded, thousands of vacancies lying vacant in government departments to be immediately filled and so on.

Improving the ease of doing business in India is an important part of the bigger Make in India or Startup India campaign. Citizen rating of ease of doing business in India has reduced from 60% a year back to 36% currently, as the Government completes its three years. The hope that SMEs had at year 2 seems to be withering away as state and local business reforms are yet to come into being.

Therefore, Citizen engagement platform LocalCircles asked people what should be the top action taken by the government to improve ease of doing business in India.Almost 59% of the 9,479 people who voted, want the government to create processes which would reduce bureaucratic interventions and interpretations. These interventions also lead to corruption and delays and is an important area of reform.

World Bank’s Ease of Doing Business rankings in June of 2016 place India at 130 position out of the total 190 countries, just a notch higher than the previous year. A low ranking here means the regulatory environment in the country is not conducive to the starting and operation of a local firm. China ranked number 84 in the same list. 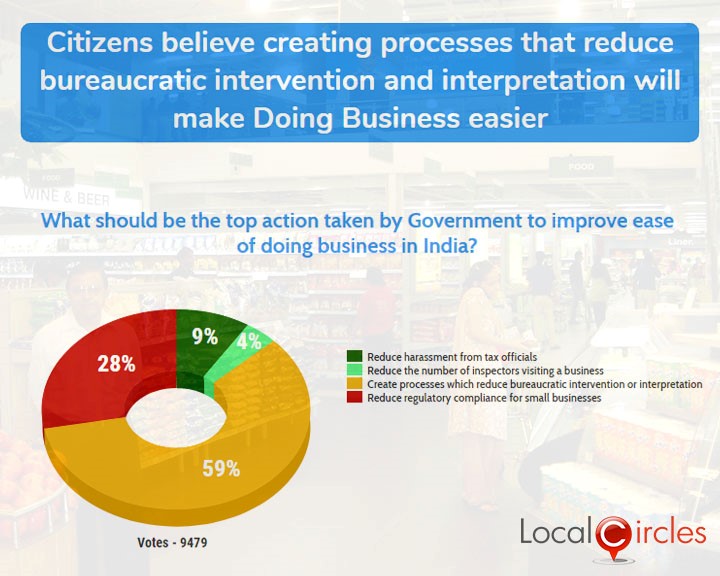 Meanwhile the citizen rating of ease of doing business in India has reduced from 60% a year back to 36% currently, which shows that the government is clearly not doing enough. 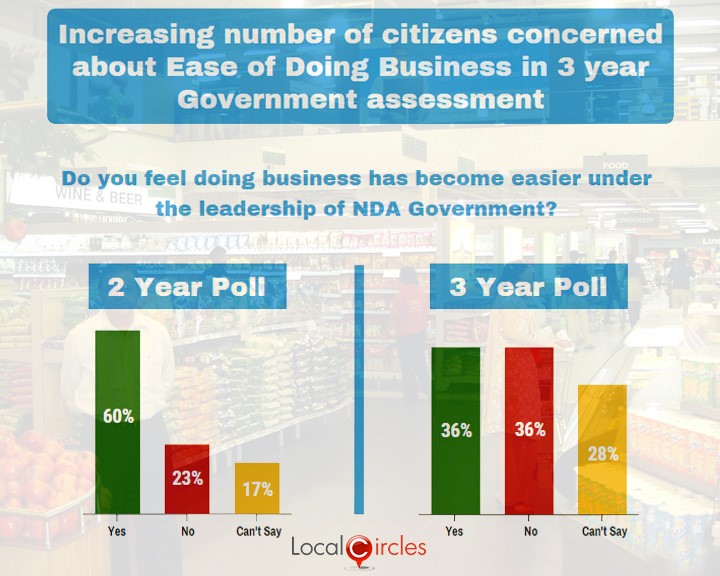 A lot of citizen inputs came in on the subject of improving ease of doing business in India. Some of them were computerising the systems and doing away with the paperwork for starting up, giving easier credit access to SMEs, time bound decision making/approval granting process, making a law/guidelines to make sure that the payments to the SME’s are received as per the agreed terms and on time etc. A major area of reform outlined by SMEs and citizens is around engagement of state governments and district magistrates in making doing business easier.

On the completion of 3 years of NDA government cost of living was identified by citizens as a cause of concern, this is inspite of the fact that the inflation ranges between 3.5 to 4 %.

Citizen engagement platform LocalCircles conducted a poll to understand where have people seen the most increase in their cost of living/budget in the last one year. Around 40% people said that their expenditure has increased the most on food items and medicines. This is an area that citizens want government to work more proactively to ensure cost control.

While 23% said education cost of children is rising and eating into their budget, which is due to the rampant rise of fees by private schools in the country. An issue that has become a challenge in several cities and led to agitation by parents against private schools.

Another 17% said cost of housing and transportation had increased the most which reflects the rising cost of fuel and commute. Another 20% of the citizens cited that the highest increase has been in the taxes that they have to pay. 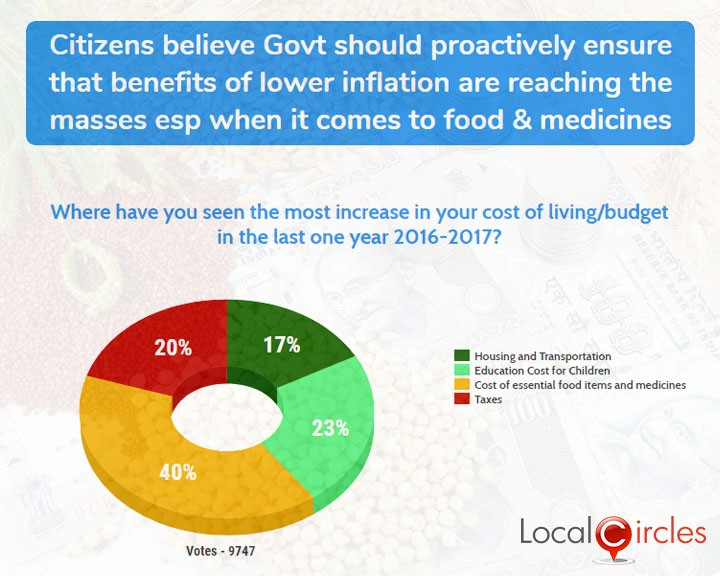 In an earlier poll, the number of people who said that the prices of essential commodities and cost of living had not come down under the present government has increased from 55% in 2016 to 66% in 2017. 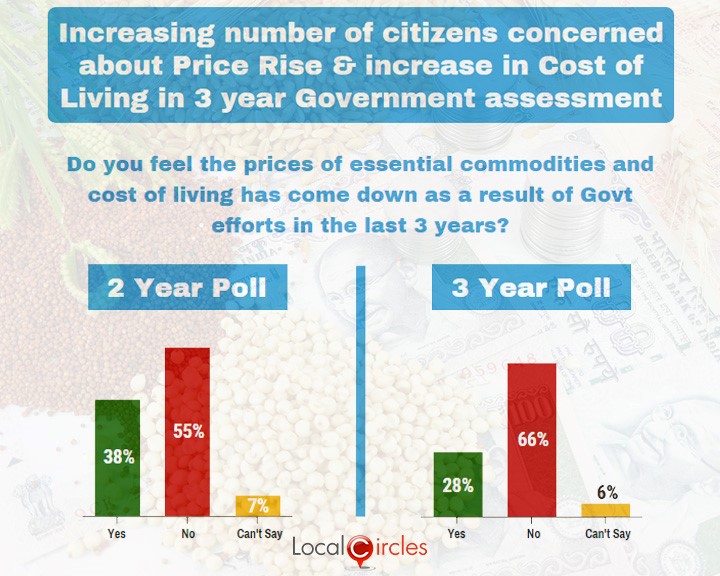 Citizens also suggested different ways in which price rise and cost of living could be controlled. These include stopping export of the essential food products to ensure availability for domestic customers and creating efficiencies in the supply chain by reducing middle men.

The government’s dream of getting a cleaner India seems to have slipped off the track. After the launch of Swachh Bharat Mission in 2014, crores of rupees have been spent by the government under different initiatives to push the SBM and improve the cleanliness in cities, but to no avail. A LocalCircles survey on the completion of three years of the NDA government shows that just 35 % citizens believe their city has become cleaner, down from 61% in 2016.

A poll on what should be the top actions taken by the government to make Swachh Bharat more successful in year 4 conducted by citizen engagement platform LocalCircles saw 8,912 votes being polled. Around 34% citizens believe that municipal processes, systems and controls should need urgent reforms. Around 26% said there should be focused efforts to reduce municipal corruption, 32% voted in favour of privatising garbage pickup and waste disposal services whereas only 8% said that more dustbins should be installed and better maintained. 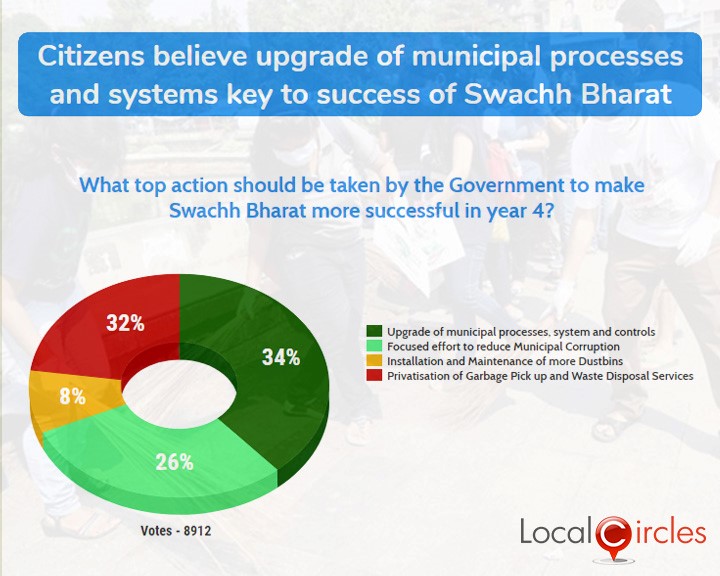 This came after a recent LocalCircles survey where the percentage of people saying that their city has become cleaner due to the Swachh Bharat Mission has drastically reduced from 61% in 2016 to 35% in 2017. 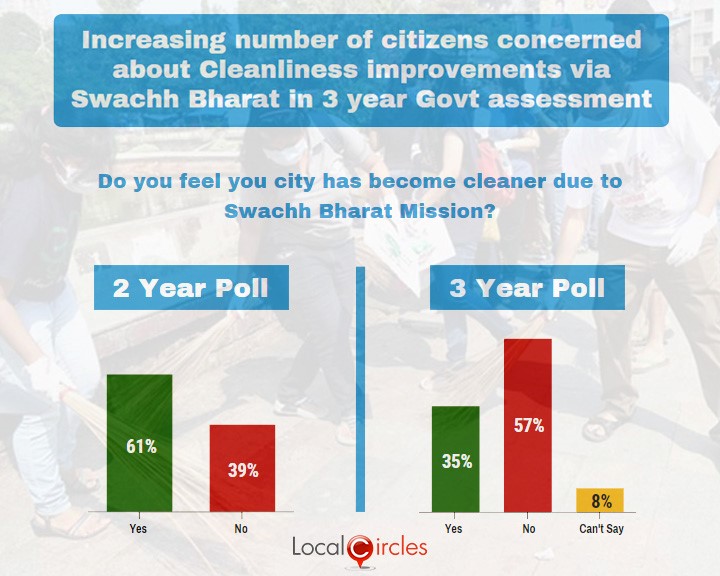 Swachh Bharat Mission is an important cog in the wheel of the central government. Citizens came up with various suggestions to get the Swachh Bharat Mission back on track. Some of them were engaging the municipality to contribute majorly in the mission, waste being segregated at source, ULBs doing the public cleaning work at nights, including spiritual leaders to preach swachhta to their followers and government setting an example by keeping the toilets in their offices spic and span.