With doctors going on strike, here are citizen suggestions to improve trust in the healthcare system

17th June 2019, New Delhi: After various cases of assault on doctors in West Bengal, the Indian Medical Association has announced a nation-wide strike.

The issue of patients’ family taking law in their own hands and beating up Doctors must be dealt with very strictly and public is in full support of that. Other than loosing a near and dear one, the frustration of many families however is how hospitals and the medical system treats them, the mistrust, the overcharging, the unnecessary tests and procedures and many a times not having the empathy. Doctors however say that it is the hospital system which enforces such rules but they have to bear the brunt of the patient family’s ire.

Ths has been a subject of discussion in various LocalCircles communities’. Citizens through LocalCircles’ polls have identified several areas which if considered and implemented will lead to increased public trust in the healthcare system which may lead to reduction in such cases against Doctors.

The results show that citizens want the government to make regulations that are oriented towards the citizens and enforce them tightly. With many state governments in the process of enforcing the Clinical Establishment Act, it is all the more important that citizens ask are listened to. 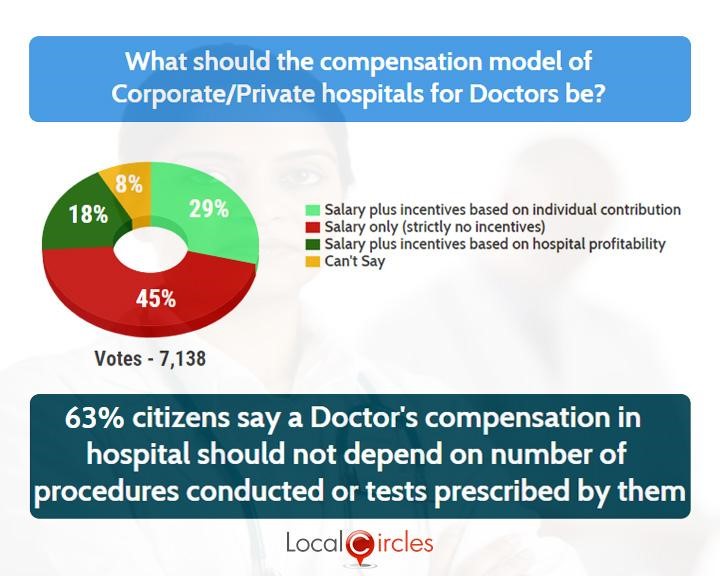 Many citizens had reported that doctors are given financial targets by hospitals and are incentivised every month for achieving them. This leads to doctors unnecessarily prescribing tests and medicines to the patients, thereby increasing their bills by many folds. 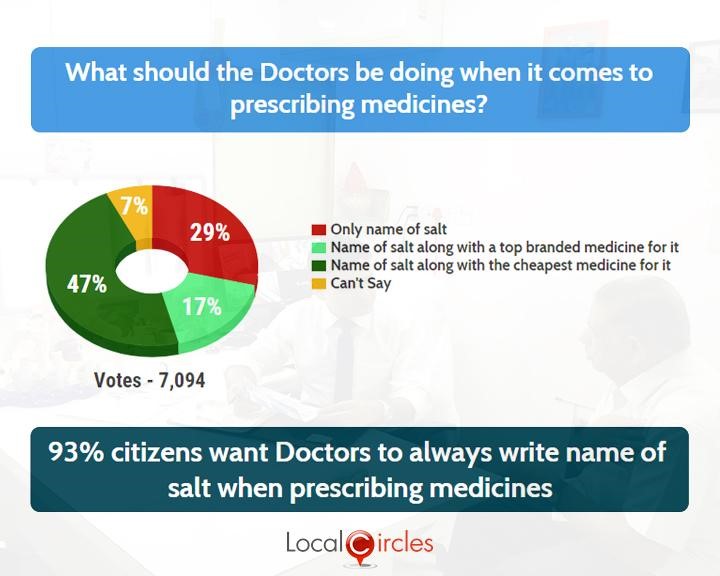 It has been reported that some pharmaceutical companies bribe doctors in form of gifts and holidays so that they prescribe their medicines to the patients, even if there are cheaper alternatives available in the market.

When asked if the patients should be given the right to replace all items they use in a hospital before discharge, 74% agreed with it and 16% disagreed with it. 10% remained unsure. 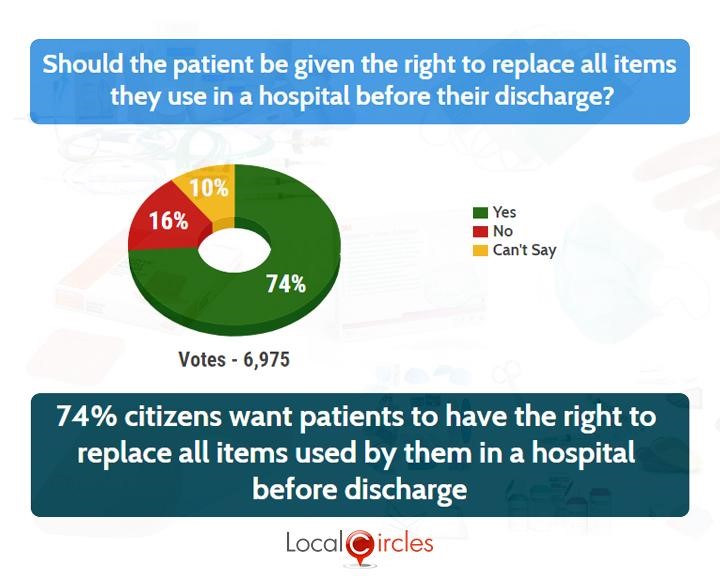 Following poll asked if hospitals should be charging the same amount for a procedure for both insurance and cash patients. 83% agreed with it and 12% disagreed with it. 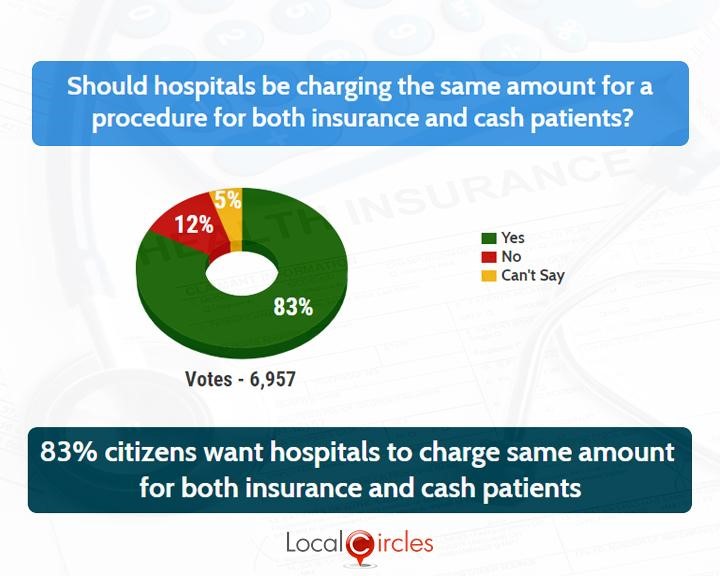 The government has made some rules to protect the patient’s interest, but they are poorly enforced. Hospitals find ways to play with the rules to increase their profit margins.

On the question if the patients in a hospital the right have to seek an independent review, 88% responded in an affirmative and only 9% responded in a negative. 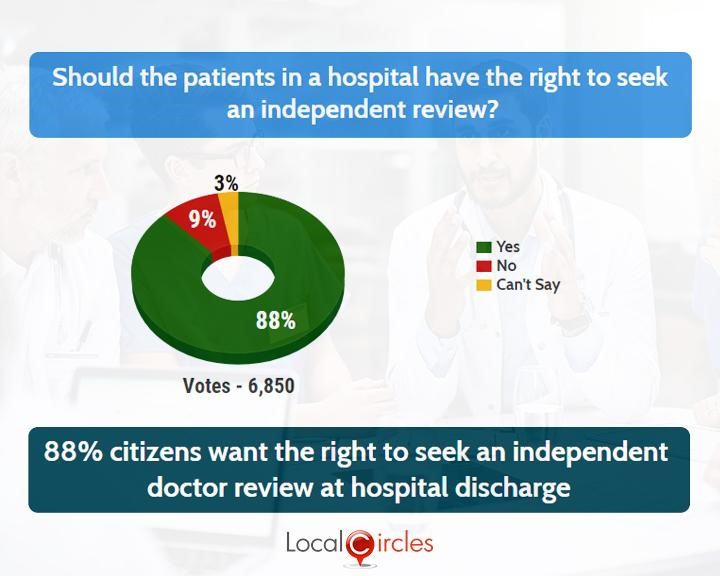 The last poll asked if the doctor’s fee in hospital should be billed directly from doctors to patient. 81% said it was a good idea whereas 11% voted against it. 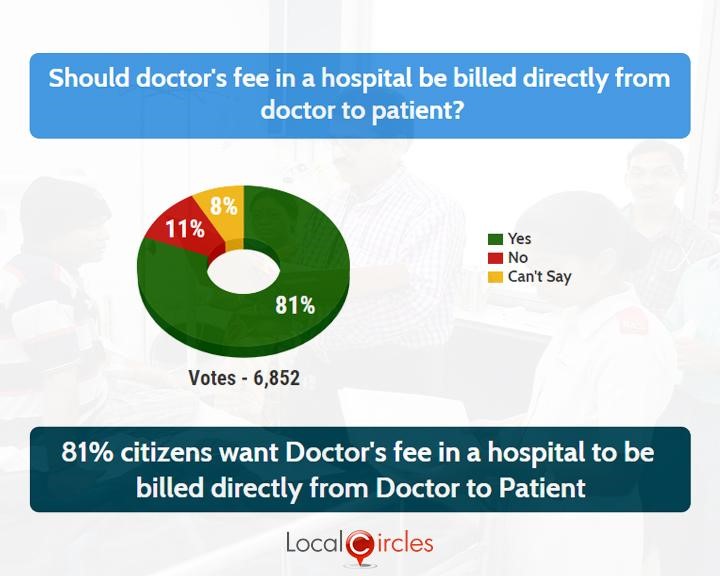