As parts of Chinese supply chain shut due to rising COVID cases, fewer Indian consumers likely to feel the impact 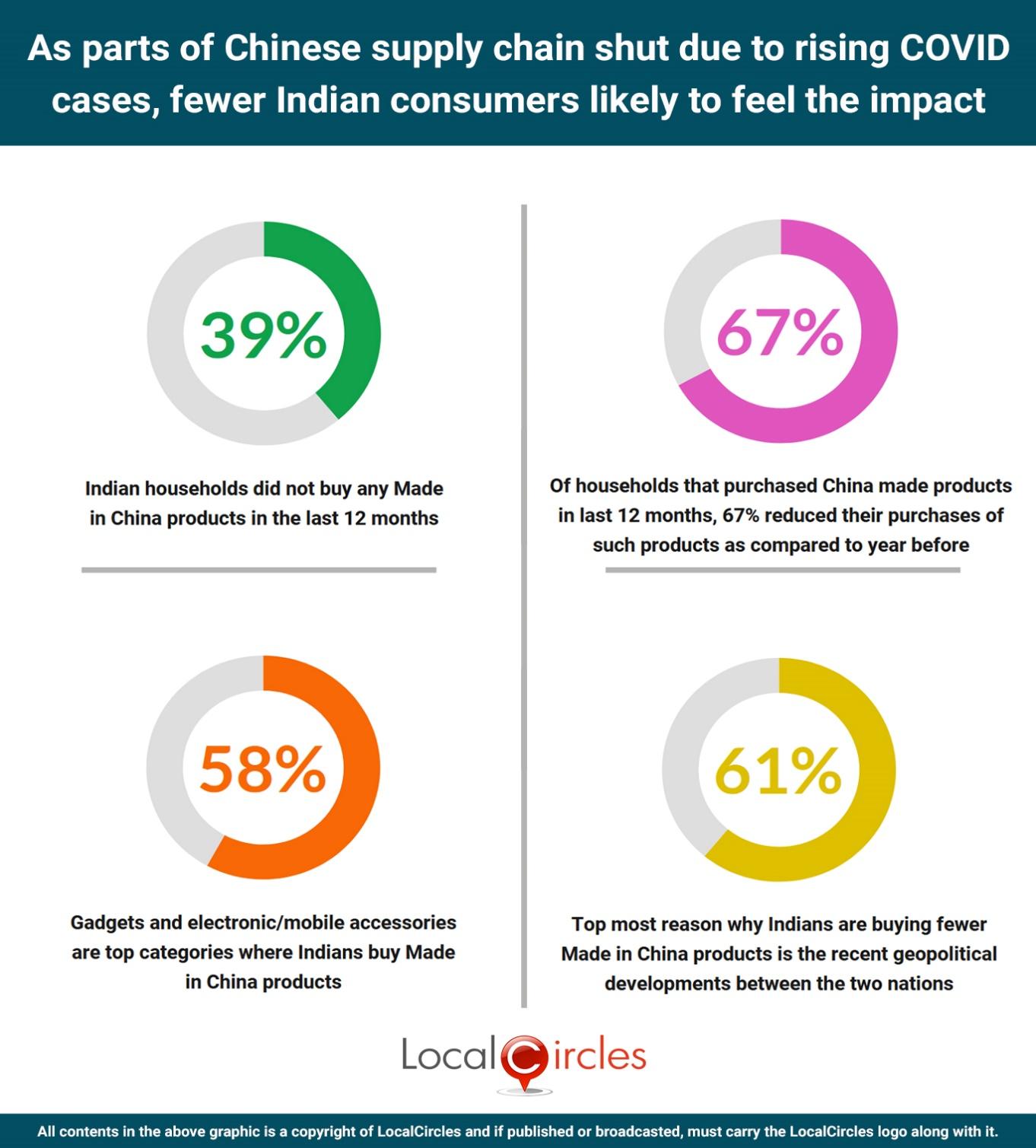 March 16, 2022, New Delhi: China has emerged as India’s largest trade partner over the years. The total trade between China and India stood at USD 125.66 Billion in 2021, a 43.3% increase from 2020. However, data suggests that India’s import from China remains lower than what they were in 2017-18. The import of electronics and electrical goods and parts accounted for nearly half of the import bill in 2020-21, as they did in the previous years. Key imports from China include parts for automobiles, smartphones, telecom and electrical instruments, chemicals and fertilisers.

Notably, before the Galwan valley clash between India and China, Indian markets used to be flooded with made-in-China products. The timing of Aatmanirbhar Bharat, which was introduced by Prime Minister Narendra Modi around the same time to drive economic recovery post the 2020 lockdown, also coincided with the escalation with China. This has prompted the Union Government to provide incentives for local manufacturing of parts and assembly of phones and other products.

China is currently witnessing a new surge in daily COVID-19 cases, the highest since the beginning of the pandemic. Within a matter of a few days, China has placed nearly 52 million residents in Jilin, Shenzhen and Dongguan under a strict lockdown and another 39 million in Shanghai and Xian under quasi-lockdown as the the country reported over 5,000 daily cases today, the highest in the history of the pandemic. It must be noted that China follows a zero COVID approach. Hong Kong as well has been facing a major surge led by the BA.2.2 sub-lineage of Omicron and is having the highest ever death rate with 300 daily deaths.

The big question that the world is grappling with is what if the Made in China supply chain shuts for a while due to COVID. With technology hub provinces like Shenzhen already under lockdown, the likelihood of parts of the supply chain shutting is high. While this will impact business-to-business transactions between Chinese and Indian entities where the product supply is a component or a pharmaceutical API, LocalCircles has attempted to understand how the slowdown or shutdown in the supply of finished goods will impact the Indian end consumer. It must be noted that the direct-to-consumer sales for China-made products in India has been on a decline, largely driven by the turn of events since the Galwan Valley conflict in 2020. There has been a clear rise of anti-China sentiment amongst Indian consumers.

The first question in the survey sought to understand the aggregate percentage of Indian households who bought Made in China products in the last 12 months. In response, 55% of households said they “Purchased China-made products in the last 12 months”. However, 39% of households said they “Did not purchase any China-made products” during the period. 6% couldn’t say, indicating that they are unaware of the place of manufacture. This question received 9,005 responses. 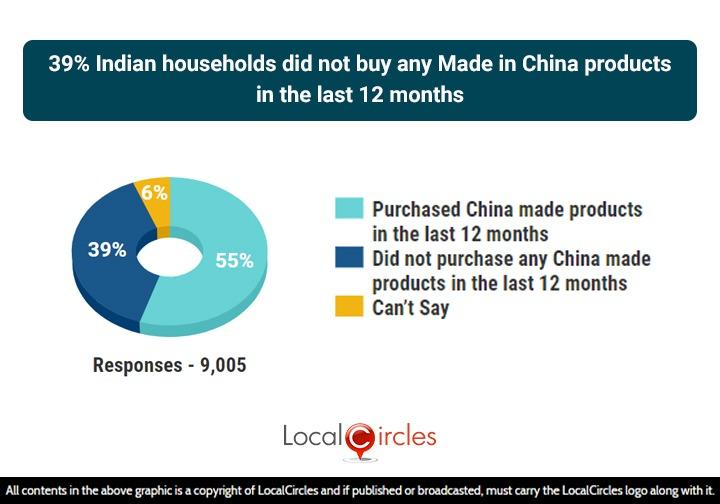 Of households that purchased China-made products in the last 12 months, 67% reduced their purchases of such products as compared to a year before

If responses given by households are evaluated on an aggregate basis, 31% said that their purchase (by rupees spent) on Made in China products has “Increased by 0-25%” in the last 12 months. Another 7% said it has “Increased by over 50%”. 16% said it is “Same as previous 12 months”. Breaking down the poll, 31% of Indian households said it has “Reduced by 0-25%”, and 5% said it “Reduced by 25-50%”. 10% couldn’t say. On an aggregate basis, of households in India who purchased China-made products in the last 12 months, 67% reduced their purchase of such products as compared to a year before. 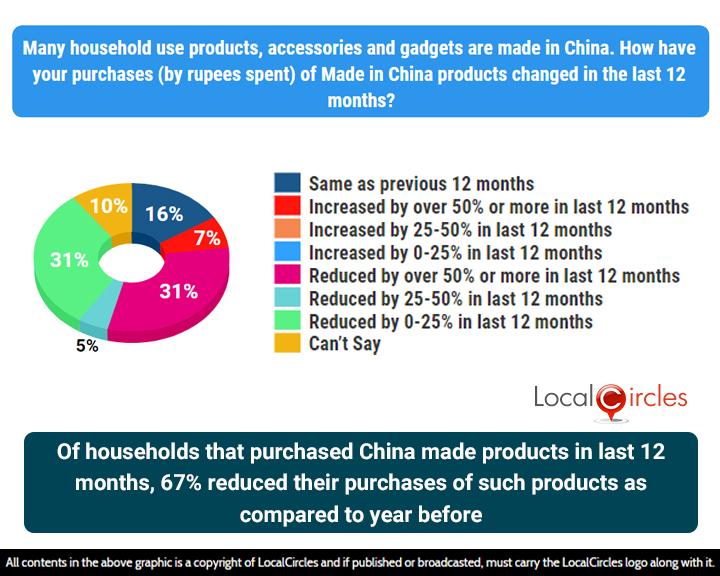 India depends heavily on China in many key industries, from electrical machinery and appliances to pharmaceutical drugs. According to most consumers, the Indian counterpart for Chinese products is generally more expensive though it might be of better quality than the latter. However, many festival-related items like LED lighting, tea-light candles, and other plastic-made products are one-time-use products and hence quality is not the top criteria for many consumers. Products like mobile phones, air purifiers, gadgets and appliances, per consumers, are mainly made in China, and are equal or better in quality too.

The next question asked Indian households, “What are the different categories of Made in China products you have purchased in the last 12 months?” In response, 29% of households said “Gadgets such as smartphones, tablets, smartwatches, others” and another 29% said “Electronic/mobile accessories”. 11% said they purchased “Festival lighting, lamps, candles, etc.”, and another 11% said “Fashion products like apparel, bags, accessories, etc”. Furthermore, “Consumer electronics & appliances” and “Vehicles accessories” were bought by 7% of Indian households, respectively. Only 4% bought “Toys and stationery” while another 4% purchased “Gift items”. On an aggregate basis, “Gadgets and electronic/mobile accessories” were found to be the top categories of products made in China that Indians bought in the last 12 months. This question in the survey received 9,009 responses. 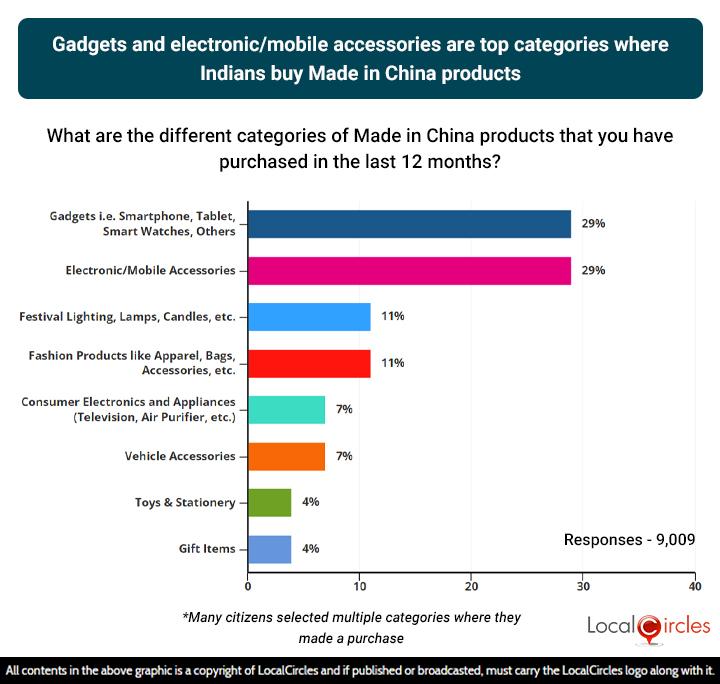 The anti-China sentiment among the Indian consumers rose when Chinese soldiers attacked their Indian counterparts at Galwan Valley in June 2020, and the call resonated across the country to boycott China-made products. The Union Government, too, enacted to restrict imports of several items, such as colour TV, air-conditioners and tyres, purportedly to promote domestic production of these items, and announced production-linked incentive schemes for select industries to achieve that goal. The Government since then has also banned nearly 300 China-based apps like Tik Tok, Shein, Cam scanner and UC Browser, citing security reasons. The latest ban on 54 apps was issued just three weeks ago. 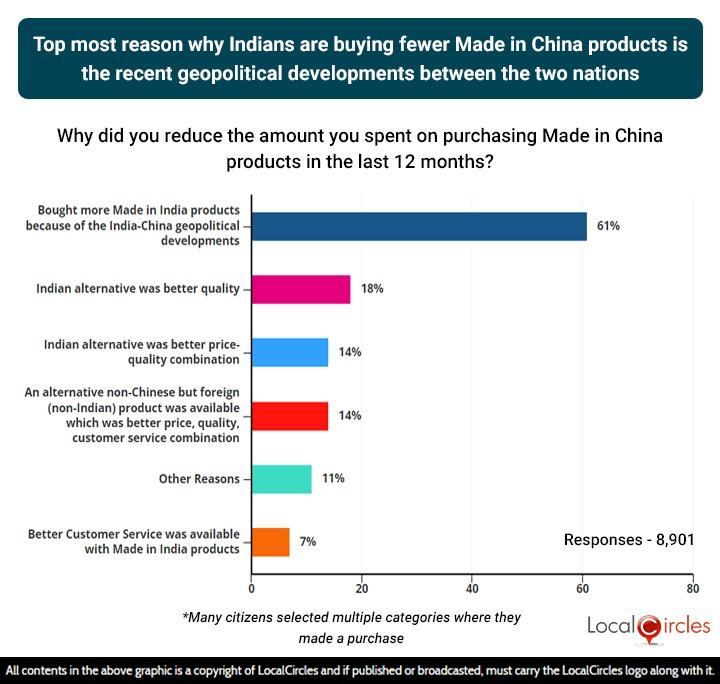 In summary, the survey indicates that the disruption in the Chinese supply chain due to surge in COVID cases is unlikely to have a significant impact on Indian consumers directly. This is largely due to the fact that an increasing number of Indian households confirmed by the survey as 39% of Indian households studied said they did not buy any made-in-China products in the last 12 months. Of households who purchased China-made products during the period, 67% said they have reduced their purchases as compared to a year before. The survey also found out that “gadgets and electronic/mobile accessories” are the top categories where Indians buy Made-in-China products. The survey makes it clear that a sizable number of people are buying fewer Made in China products on festivals and in daily life given the geo-political situation and China’s aggression towards India at the border. However, as the Chinese supply chain gest disrupted due to COVID, many of the components and raw materials procured by Indian businesses are likely to face disruption which in turn could cause some disruption to consumers in products non-availability and aftermarket service.