December 21, 2022, New Delhi: The COVID virus via its sub variant BF.7 is again back with a bang and is causing havoc in China. After China eased restrictions post many protests in the country, it is experiencing a massive surge in COVID cases overwhelming hospitals like never before. In the first wave in late 2019 and early 2020, the surge was limited to a few parts of China but this time it appears to be a nationwide surge.

Some global epidemiologists are estimating that more than 60 percent of China and 10 per cent of world’s population are likely to be infected over the next 90 days with deaths likely in the millions. China has reported no Covid deaths in Beijing since the authorities announced four deaths between November 19 and 23. However, Beijing Dongjiao Crematory, on the eastern edge of the Chinese capital, has experienced a jump in requests for cremation and other funerary services, according to people who work at the compound, reported WSJ."Since the Covid reopening, we've been overloaded with work," said a woman who answered the phone at the crematorium on Friday, adding, "Right now, it's 24 hours a day. We can't keep up."

With what is happening in China, the Ministry of Health and Family Welfare, Government of India has issued an advisory asking states to increase genome testing highlighting the new need for monitoring different variants in India. Citizens also are concerned and in the last one week and hundreds of inputs have been received on the China situation by LocalCircles. Some citizens have also been expressing the need to shut flights from China. Currently flights from mainland China to India are through other countries while direct flights run from Hong Kong to India. 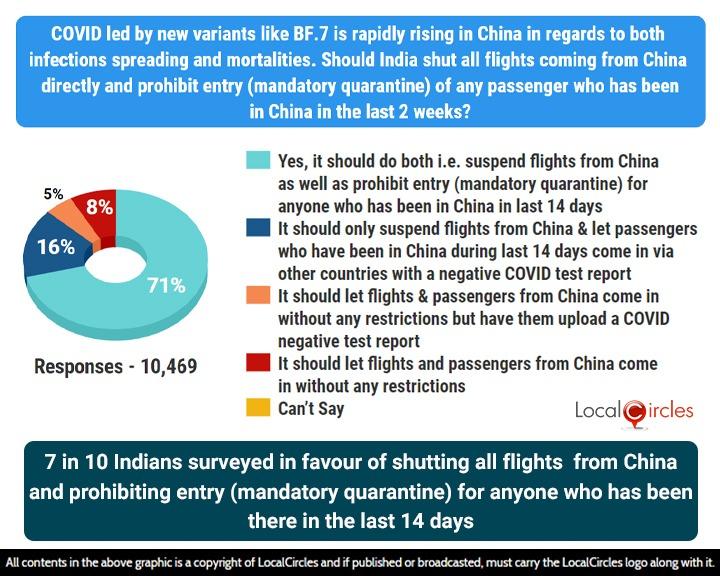 The findings indicate that majority of the citizens surveyed 87% are in favour of shutting all flights from China while 71% are in favour of prohibiting entry (mandatory quarantine) of all passengers who have been in China in the last 2 weeks.

LocalCircles will be sharing the findings of the survey with all key stakeholders in Central and State Governments so that citizens’ feedback can be taken into account as decisions regarding flight suspensions, restrictions, screening and quarantine are taken.