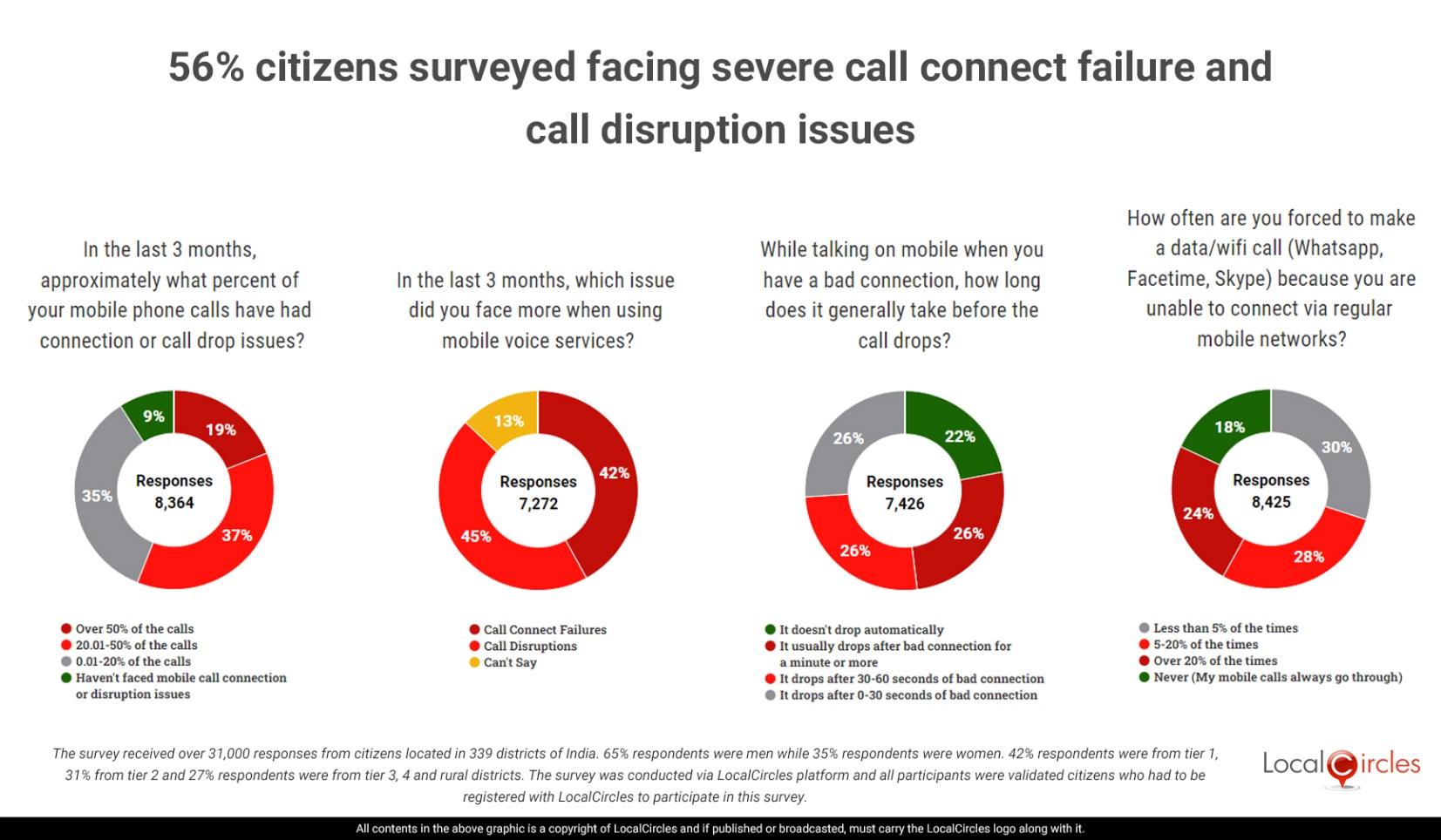 September 6, 2022, New Delhi: Four years after the Prime Minister is reported to have directed the telecom department to find technology-led solutions to the call drop and connectivity problems and ensure telecom operators offer adequate customer satisfaction, little seems to have changed. During the Covid pandemic when most people had to work from home and students attended online classes, those who could afford, migrated to bigger data plans for their increased internet use. But despite the shift to 4G, people across the country are continuing to grapple with connectivity issues. Given the bad connectivity issues leading to failure to get a connection, call drop or problem with the person at the other end not being able to hear properly, it is no wonder that many still use alternate channels like data-wifi calls or even landlines to have their conversations. This scenario will hopefully change in the near future as major telecom companies race to launch 5G services in a phased manner across major cities.

The Telecom Regulatory Authority of India (TRAI) Secretary V Raghunandan, in an interview with ET Telecom earlier this month, said, “Telecom service providers are doing improvements and addressing the quality of service (QoS) issues except in few remote areas.” TRAI secretary added that telcos including BSNL have been performing fairly well on parameters such as network congestion and call drops over the last two years.

As India prepares to take its next giant step in telecom services, LocalCircles conducted a survey to find out the experience of citizens using mobile phones for voice services in the last 3 months and compare it with the findings of a survey conducted in 2019 to understand the change over time. The survey results unfortunately indicate that not much has changed in the quality of service. In fact, the survey reveals that call drops and connects have become a bigger issue. The survey which received over 31,000 responses from citizens located in 339 districts of India covered the length and breadth of the country. 65% respondents were men while 35% respondents were women. 42% respondents were from tier 1, 31% from tier 2 and 27% respondents were from tier 3, 4 and rural districts. 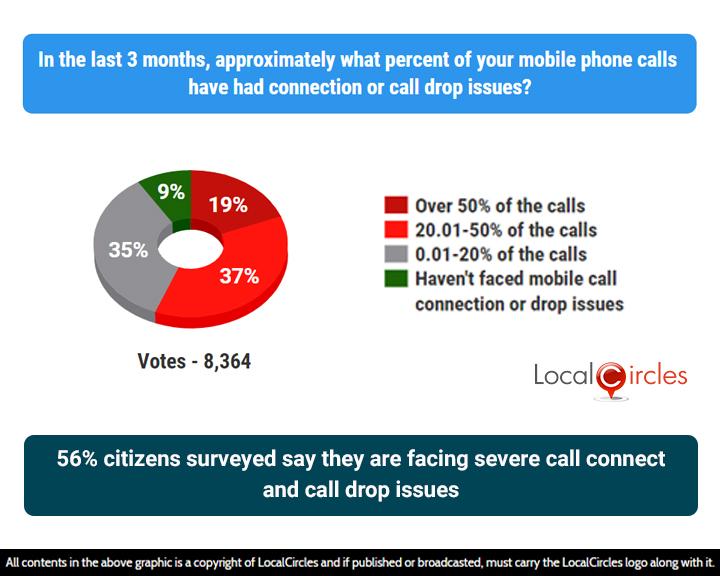 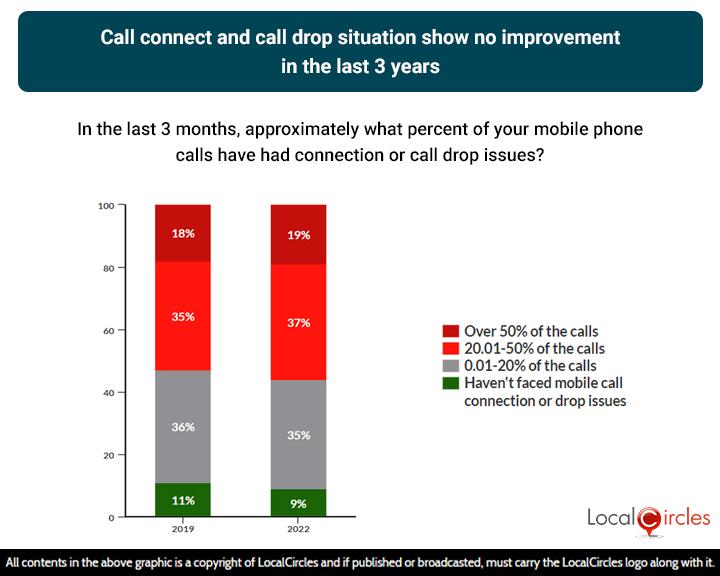 The next question in the survey attempted to understand issues citizens faced most when using mobile voice services in the last 3 months, 45% said “call drops” and 42% indicated “call connect failures” while 13% couldn’t say. The findings indicate that call connection failure is almost as big an issue as call drops. This question received 7,272 responses. 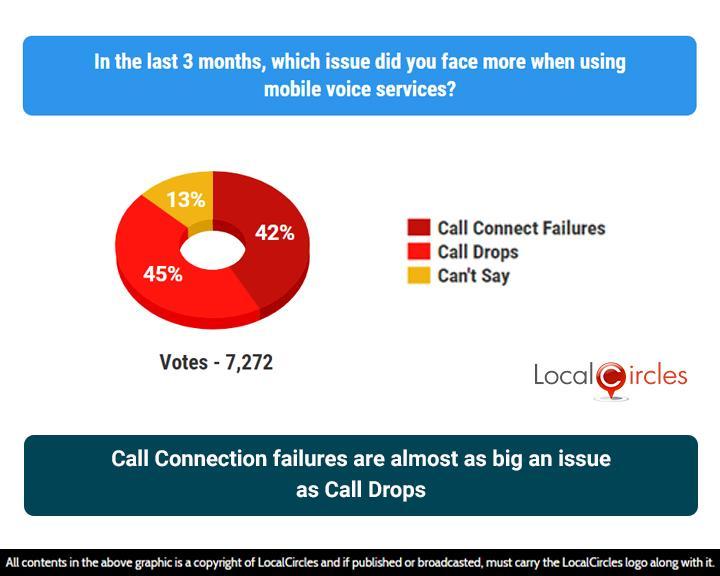 In 2022, Call Drop has become a bigger issue for citizens than Call Connection failures

In comparison to a similar survey conducted by LocalCircles in 2019, the percentage of citizens reporting call drop as their top issues increased from 34% to 45% in 2022. However, during the last three years, the percentage of citizens reporting call connection as their top issue dipped from 54% in 2019 to 42% in 2022. The findings indicate that in 2022, call drop has become a bigger issue for citizens than call connection failures. 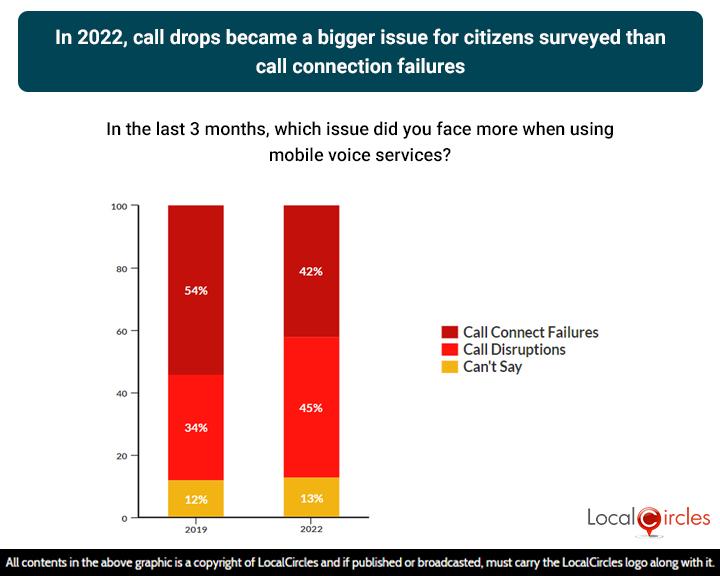 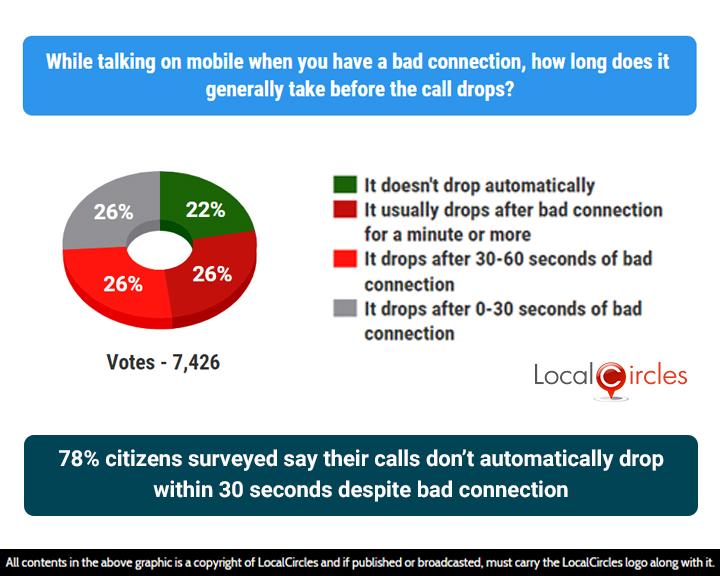 Despite call quality becoming bad, most calls don’t drop automatically even after a minute has passed

Operators are supposed to end a bad call in a certain time period automatically when their system detects that the two parties are not audible and call quality has deteriorated. There are penalties that TRAI has imposed basis call drops as a percentage of total calls. However, feedback from people suggests that some operators tend to prolong the automatic ending of calls so the user ends up disconnecting and hence operators avoiding the call drop penalty. 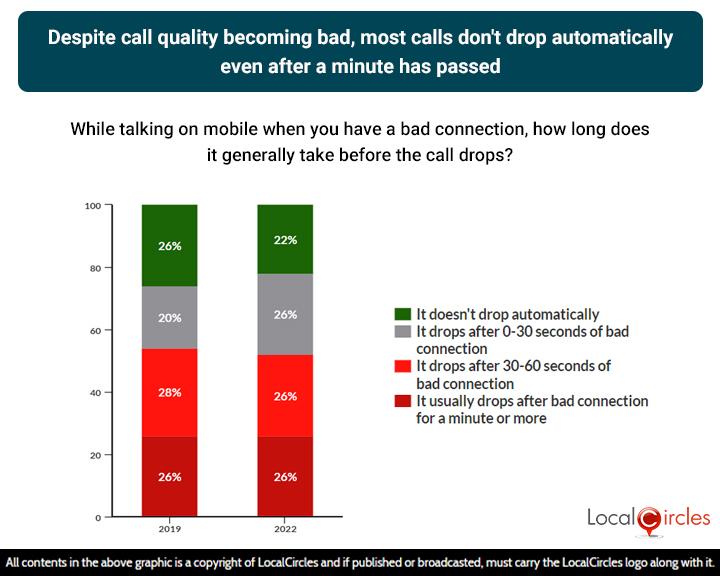 Of the citizens who have a data or wi-fi connection, 82% have been making data/wifi calls to overcome network issues

Call drops generally occur in any mobile network when the towers and infrastructure is unable to handle the surge in users. Industry experts suggest that lower tariffs charged by some companies discourage rival operators from upgrading. However, the telecom sector needs many drastic changes in order to improve deteriorating call quality in India. Many citizens who have a data or wi-fi connection revealed having to make data/wifi calls due to constant call drops and poor quality of connection.

The next question in the survey “How often are you forced to make data/Wifi calls (via WhatsApp, Facetime, Skype), because they are unable to connect via regular mobile networks?” saw 28% sharing “5%-20% of the time”, 24% said “over 20% of the time”, while another 18% said their mobile calls always go through. Only 30% of respondents said “less than 5% of the time”. On an aggregate basis, 82% of citizens who have a data or wifi connection have been making data/wifi calls frequently as they face difficulty in getting or staying connected on a regular mobile network. This question received 8,425 responses. 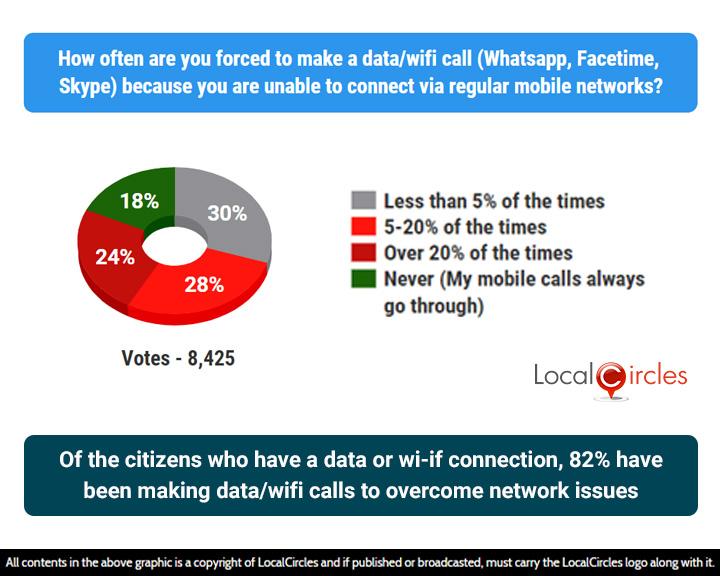 India is currently the second-largest telecommunication market with the second-highest number of internet users in the world. India’s total mobile connections base stood at 1,184 Million early this year. Telecom experts say, the sector is struggling with high call drops mostly because most of the operators in India do not meet the benchmark set by the TRAI. 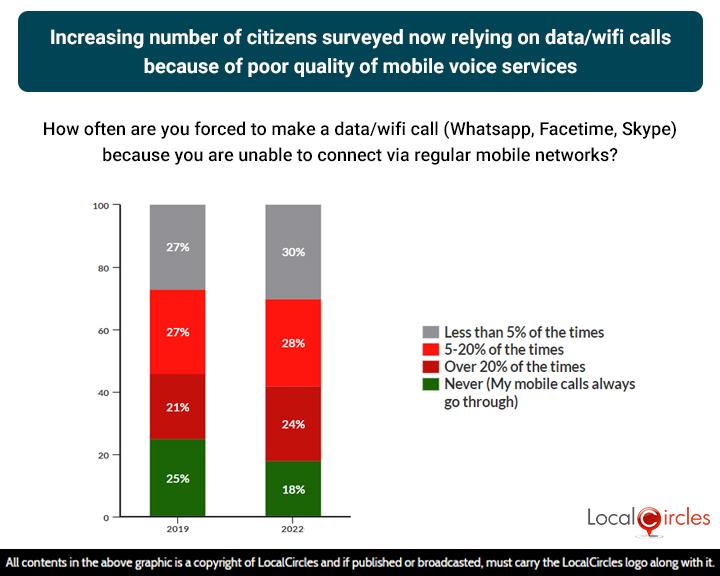 The results of the survey clearly indicate that telcos' deteriorating voice service continues to be a major concern for mobile phone users of India with 56% of citizens using mobile voice service facing call connect failure and call disruption issues. There is hope that 5G will resolved some of these issues but at this point, it is just hope. While 5G will definitely increase speed and quality of mobile internet connections, people are just not confident that it will solve the issues of call connect and drops unless the primary calling service only is entirely running on the data connection.

People are keen that TRAI and Department of Telecommunications, Government of India gets to the bottom of the call connect and drop issues and address them on highest priority as they haven’t been addressed in the last 3 years.