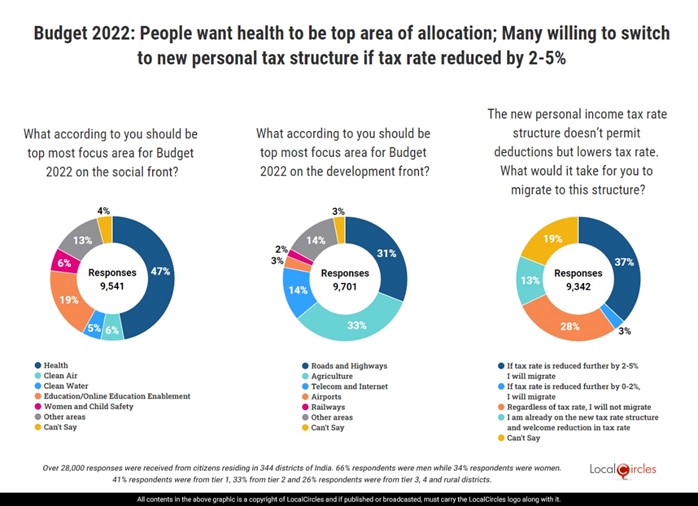 January 31, 2022, New Delhi: Finance Minister Nirmala Sitharaman will present the Union Budget of India, laying out the revenue and expenditure plan for the fiscal year 2022-23, in the Parliament on February 1st, 2022. The past year was marked by the world’s largest vaccination drive across India that started in January followed by the 2nd wave of COVID outbreak led by the Delta variant, which reached its peak in May 2021. Just as the economy was recovering post decline of cases, the country faced its 3rd COVID wave starting December last year led by a more transmissible COVID variant, Omicron. The Union Budget is expected to put the economy on an accelerated growth path after the impact caused by the pandemic. The Narendra Modi-led Union Government of India is expected to bring amendments in the tax law that is necessary for the growth of economic sectors like agriculture, roads & highways, telecom & Internet, airports, as well as spending in social sectors like health, clean air, clean water, education, women and child safety, to name a few. Citizens have high hopes that the upcoming Union Budget 2022 will lay the path for faster growth along with providing some relief to the tax-paying middle class in form of lower tax rates/incentives.

LocalCircles has conducted an assessment to gauge the top expectations of people from the Union Budget 2022. Over 28,000 responses were received from over citizens residing in 344 districts of India. 66% of the participants were men while 34% were women. 41% respondents were from Tier 1, 33% from tier 2 and 26% respondents from tier 3,4 and rural districts.

The survey asked citizens, “What according to you should be the top focus area for Budget 2022 on the social front?” In response, the majority of 47% of citizens said “Health” as to priority. 19% said “Education/online education enablement”, 6% said “Clean air”, another 6% said “Women and child safety”. 13% said “Other areas” while 4% did not have an opinion. This question in the survey received 9,541 responses. 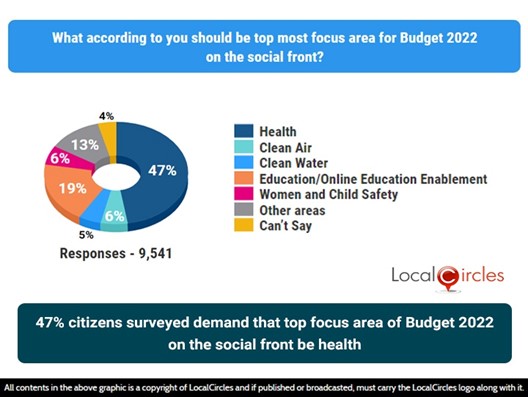 It may be mentioned here that adequate access to healthcare, especially in rural areas has always been scarce and this came to the fore during the second wave of COVID. The majority of citizens in the LocalCircles survey said that the Government of India should expedite a project to either build permanent or temporary Primary and Community Health Centers (PHCs and CHCs), which will not only address the shortage of these centers across rural areas but can act as the first response to meet the COVID emergency need of the villagers for the future pandemic. Given the isolation need for the villagers, citizens believe that the Government should create a National Mission to convert Panchayat Ghars into isolation centers with basic infrastructures like beds and toilets. People want to see action such that there are district and panchayat level healthcare and isolation facilities not only to better handle a future COVID wave but in regular times for the general wellbeing of people and to handle any infectious disease better. People felt that it is also critical that the Government of India puts immediate focus on funding and enabling a staffed and dedicated children healthcare.

In addition to the focus on healthcare, people also believe that the Government of India should make protective masks (N-95/KN-95/FFP2) available to every citizen across the country. With the transmissible nature of the virus and cloth and surgical masks no longer preventing the spread, it is critical that people are right masking. LocalCircles survey in December 2021 found that of the Indians who are using masks, 2 in 3 are still wearing cloth masks and need to upgrade their masks. In the same survey, 73% citizens who support this wanted that Government of India should fund this program and if there is any shortfall, the Corporate Social Responsibility funds should be tapped into. LocalCircles estimates that to cover the entire population, this program is likely to cost only INR 10,000 crores.

The survey asked citizens, “What according to you should be the top focus area for Budget 2022 on the development front?” In response, 33% of citizens said “Agriculture”, 31% said “Roads & highways”, 14% said “Telecom and Internet”, 3% said “Airports”, and 2% said “Railways”. 14% of citizens cited “Other areas” while 3% did not have an opinion. On an aggregate basis, the findings indicate that 64% of citizens surveyed demand that top focus area of Budget 2022 on the development front should be agriculture, and roads & highways. This question in the survey received 9,701 responses. 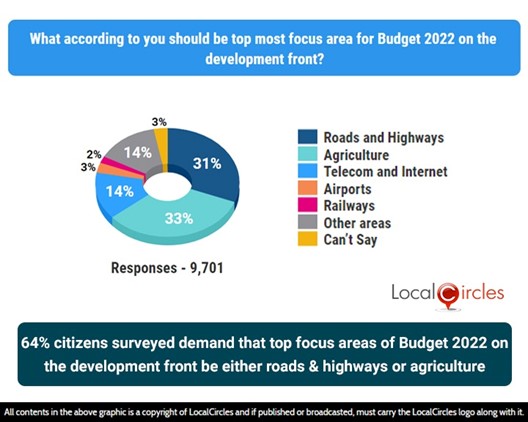 Lowering of tax rates has been a long-standing demand of the taxpayers for the last 3 years. While corporate taxes were reduced in Budget 2020, little or no relief has been given to the middle-class taxpayers in the recent past with a new alternate income tax structure that was introduced in 2020.

The final question in the survey asked citizens, “The new personal income tax rate structure doesn’t permit deductions but lowers tax rate. What should it take for you to migrate to this structure?” In response, 37% said they would migrate if tax rate is “reduced further by 2-5%”, and 3% said if it is “reduced further by 0-2%. There were 28% of citizens surveyed said “Regardless of tax rate, I will not migrate”. 13% said “I am already on the new tax rate structure and welcome reduction in tax rate”. 19% of citizens did not have an opinion. On an aggregate basis, 40% of taxpayers surveyed say they are likely to switch to new income tax structure if Government reduces tax rate by an additional 2-5%. This question received 9,342 responses. 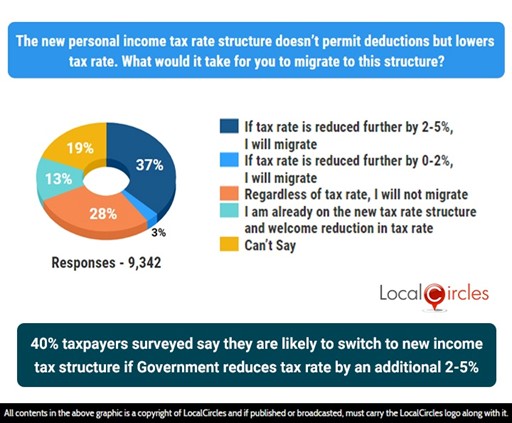 In summary, 47% of citizens surveyed demand that the top focus area of Budget 2022 on the social front be health and have highlighted several areas in the area that need capital allocation. On the development front, 64% said that top focus area of Budget 2022 should be either roads & highways or agriculture. 40% taxpayers surveyed say they are likely to switch to new income tax structure if Government reduces tax rate by an additional 2-5%.

Over 28,000 responses were received from over citizens residing in 344 districts of India. 66% of the participants were men while 34% were women. 41% respondents were from Tier 1, 33% from tier 2 and 26% respondents from tier 3,4 and rural districts. The survey was conducted via LocalCircles platform and all participants are validated citizens who had to be registered with LocalCircles to participate in this survey.