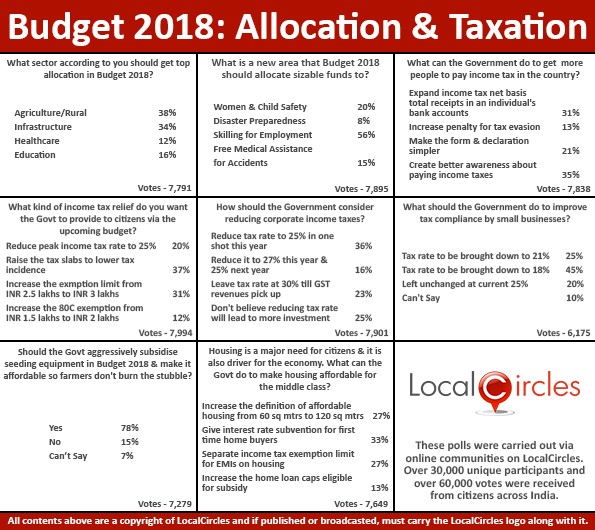 31st January 2018, New Delhi: Every citizen recognizes the importance of agriculture both as a component of the economy and job provider. Farmers have lately been witnessing fall in income, leading to many cases of suicide across the country. LocalCircles conducted a survey to understand what citizens thing should be done in the field of allocation and taxation. Citizens were asked which sector according to them should get top allocation in this year’s budget. 38% said it should be agriculture/rural, 34% said it should be infrastructure, 12% said healthcare while 16% said education. 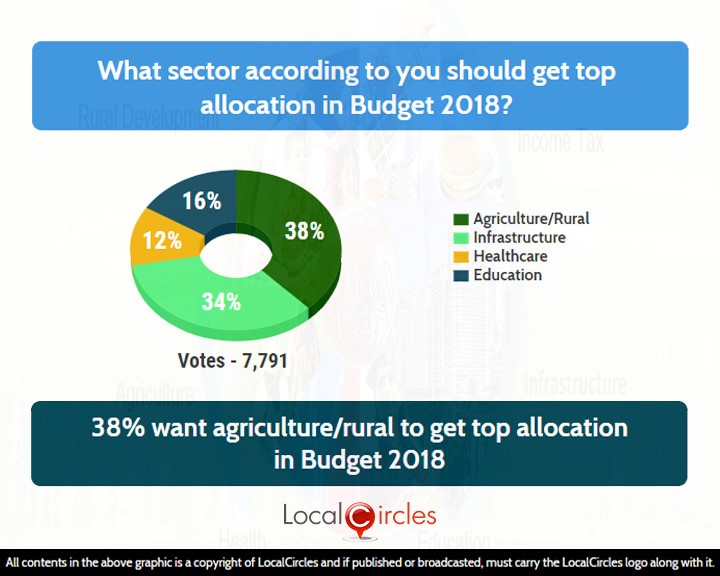 Around 56% citizens in the second poll wanted a sizable amount of money to be allocated to skilling and employment in the upcoming budget 2018. 15% want it to be free medical assistance for accidents, 20% to women and child safety and 8% said disaster preparedness. Skill development as a crucial driver of employability in the country, and Skill India Mission is a flagship program of the government to drive this. 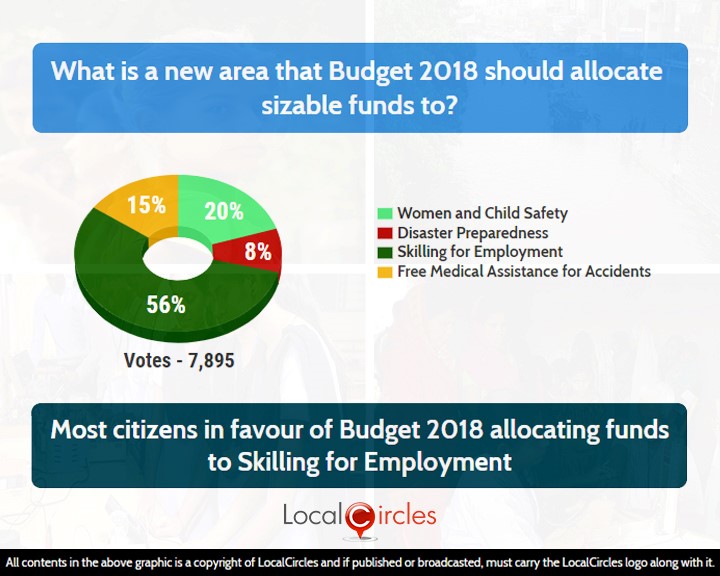 Only 6% of the total population currently pays income tax in India. Businesses with annual revenue up to INR 50 crores are taxed at 25% and no surcharge is applicable if profit is under INR 1 crore. The general thinking has been that individual as well as corporate income tax rates are high in the country which is preventing tax receipts. Citizens have constantly been saying that the department should reduce the income tax rates and also take strong steps to ensure that more people pay income tax.

People were asked what can the Government do to get more people to pay income tax in the country. 31% said income tax net should be expanded basis total receipts in an individual's bank accounts, 13% said penalty for tax evasion should be increased, 21% said the income tax form and declaration could be simplified further and 35% said better awareness should be created about paying income taxes. 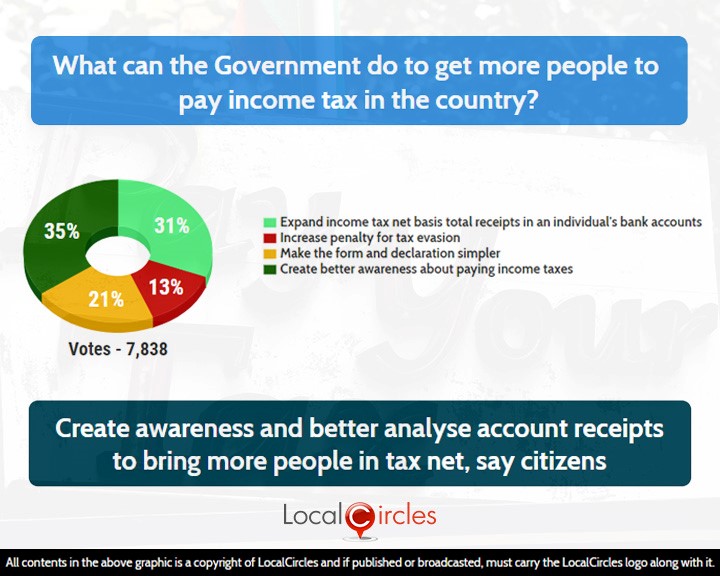 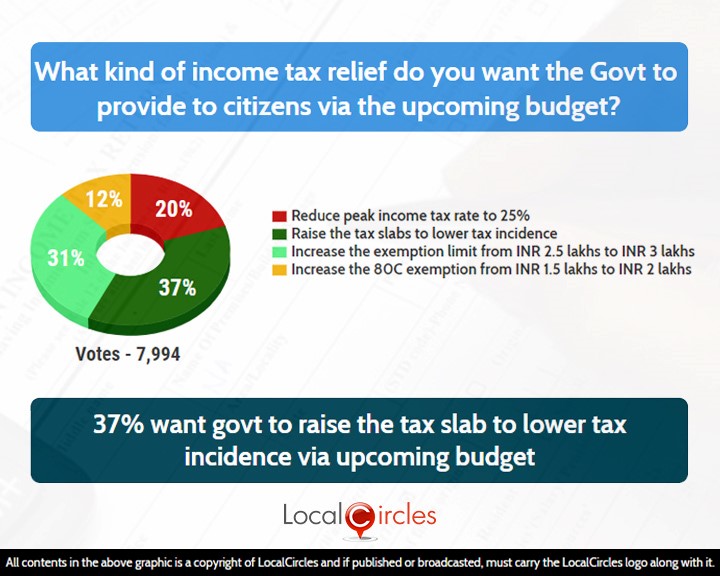 The government had expressed its intention to gradually reduce the corporate taxation rate. When asked about how should the government consider reducing corporate income taxes, 36% said it should be reduced to 25% in one stroke this year and 16% said it should be reduced to 27% this year and 25% next year. 23% said tax rate should be left at 30% till GST revenues pick up while 25% said they don’t believe reducing tax rate will lead to more investment. 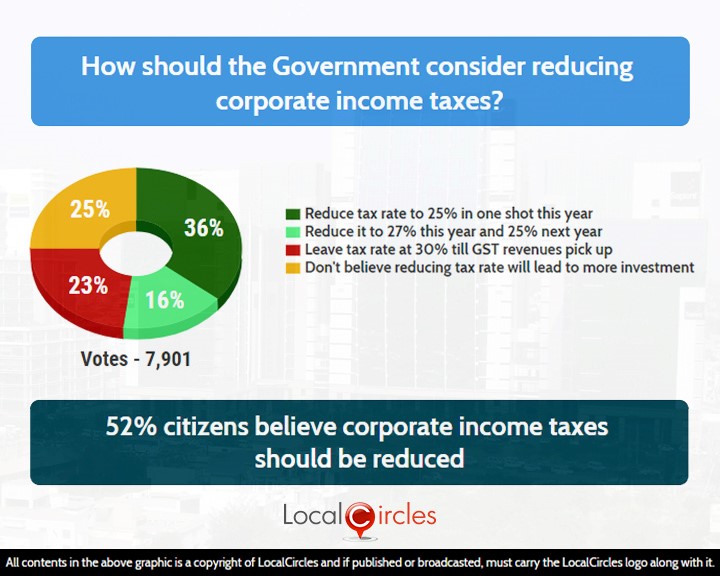 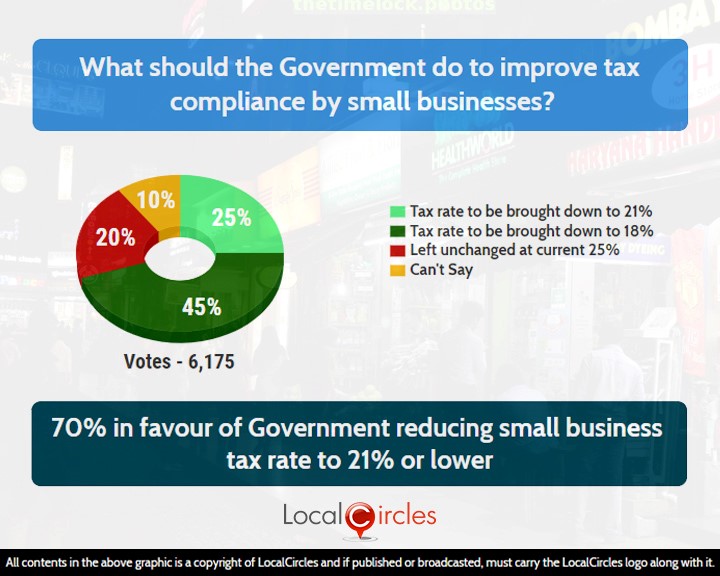 Housing is a core industry and drives the economy, moreover over the last one year it has faced the brunt of the demonetization and RERA. To make housing affordable for middle class, 33% citizens want the government to give interest rate subvention to first time home buyers, 27% wants separate income tax exemption limit for EMIs for housing, 13% want the home loan caps eligible for subsidy to be increased whereas 27% want government to increase the size of homes that classify as affordable housing. 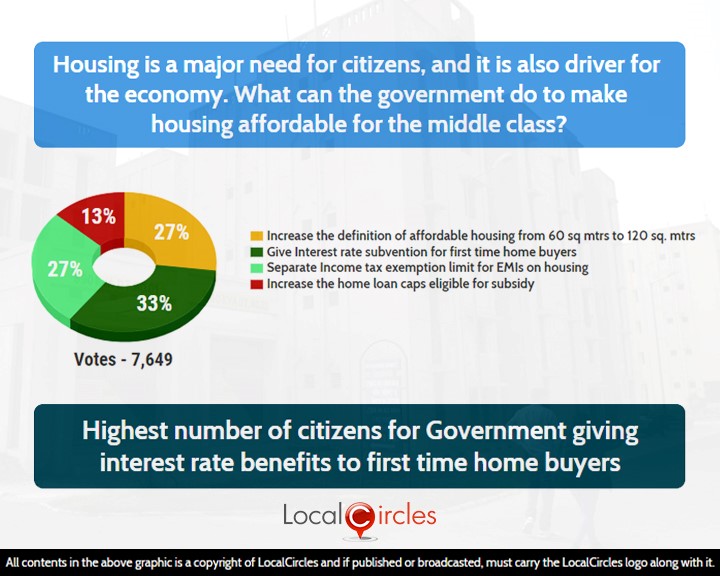 Every winter due to stubble burning in North India cities are covered with poisonous air a combination of high carbon particles and sulphur in the air. State government have been trying to persuade farmers not to burn stubble and cause pollution. Farmers are not changing this practice as seeding equipment that is needed for planting seeds with the stubble in the farm is very expensive. 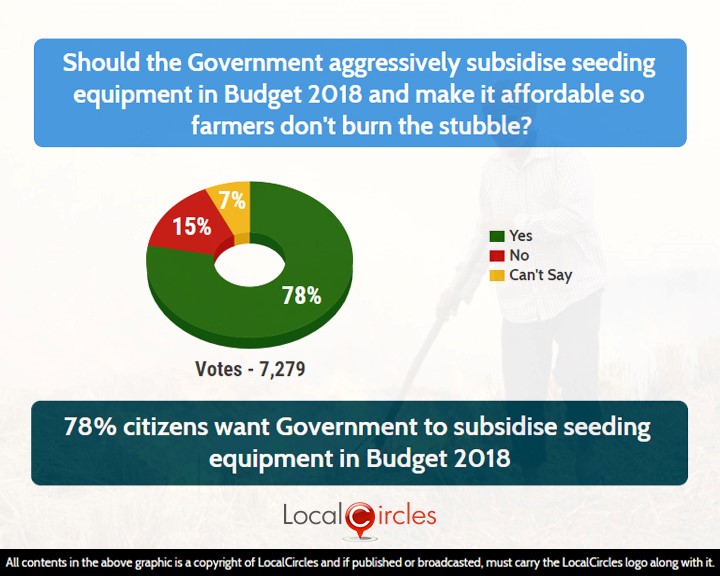 Next question was if the Government should aggressively subsidise seeding equipment in budget 2018 and make it affordable so farmers are not forced to burn the stubble. 78% agreed with it while 15% disagreed with it. 7% could not decide.