One year post India-China Galwan valley escalation: 43% Indian consumers say they did not buy any Made in China product in the last 12 months

June 15, 2021, New Delhi: One year after the Galwan valley escalation between China and India, one area where the aftereffects can be felt is that of trade and commerce between the two countries. The Government of India, after the Chinese escalation, acted to restrict the import of several product categories from China to promote the domestic production of items in these product categories. The timing of Aatmanirbhar Bharat which was introduced by the Prime Minister around the same time to drive economic recovery post the 2020 lockdown also coincided with the escalation with China. Later in the year, the Government also banned over 100 China-based apps like Tik Tok, Shein, Club Factory, and AliExpress for misusing sensitive Indian data.

Post the attack on Indian soldiers in Galwan valley, many Indians had expressed their intent to boycott Chinese-made products. The LocalCircles survey conducted in November 2020 around the festive season indicated that 71% of Indian consumers did not purchase Made in China products, and many of those who did ended up doing so because of their lower prices. Though Chinese trade with India declined in calendar year 2020 by 5.6% to USD 87.6 billion, the 5 months of calendar year 2021 show a 42% increase in Chinese imports by value. LocalCircles research suggests that this surge was particularly due to the rise in import of life-saving medical equipment and medical oxygen equipment by India from China as COVID-19 cases surged in the country. With most of that year being induced by the pandemic and subsequent lockdowns, household earnings were severely impacted, and for some buying the lowest cost product was not a choice but the only option and hence they ended up buying Chinese items.

India’s economic recovery which looked on solid footing in January 2021 with leading global institutions predicting 11% GDP growth for 2021-22 has hit another speed bump with the lethal 2nd COVID wave putting almost all states in a 45-60 day lockdown. With daily COVID cases now declining by over 80% in the last one month from over 400,000 to near 80,000 and the economic unlocking underway, many Indians are hoping for a fast recovery though the likelihood of a 3rd COVID wave before year end is high.

To understand, where Indian consumers stand a year later on their resolution to buy no or less Chinese, LocalCircles conducted a survey which received near 18,000 responses from consumers located in 281 districts of India. The survey also tried to understand the primary reason that prompted Indians to buy Chinese products in the last 12 months.

India depends on China in many key industries from electrical machinery, appliances to pharmaceutical drugs. In reality, China’s share in Indian imports for intermediate goods is 12%, and capital goods is 30%, while final consumer goods is 26%. The first question in the survey sought to understand how many products that were made in China did Indian consumers purchase in the last 12 months. In response, 43% said they did not buy anything made in china. Breaking down the poll, 34% said 1-2 products, and 8% bought 3-5 of them. There were also 4% of consumers who bought 5-10 made in China products, 3% said 10-15, 1% said over 20, and another 1% said 15-20 products. 6% of Indian consumers did not have an opinion. This question in the survey received 9,052 responses. 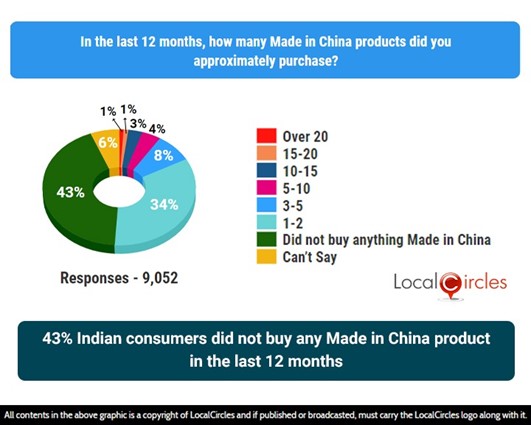 Of those Indian consumers who purchased made in China products in the last 12 months, 60% bought only 1-2 items

It must be kept in mind that there are many Made in China products that do not have an Indian counterpart that offers similar or higher value-quality-uniqueness combinations. Similarly, many global manufacturers of gadgets and appliances have their factories in China producing for global demand and while such products may carry a global brand name, they are produced in China. During the pandemic in 2020 and in 2021, many Indian purchased pulse oximeters to measure their SPO2 levels and 90% of these oximeters available in India are Made in China. 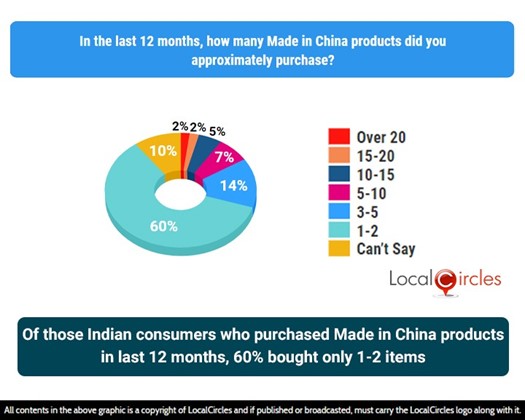 According to most consumers, the Indian counterpart for a Chinese product is generally more expensive though it might be of better quality. However, many festival-related items like LED lighting, tea-light candles, plastics, are one-time-use products and hence quality is not the top criteria for many consumers. For some, others, products like mobile phones, air purifiers, gadgets and appliances, consumers have reported China-made products to be equal or better in quality. Also, made in China fertilizers, electronic circuits, and data processing units are also cheaper. To better understand from Indian consumers about their primary reason to buy China-made products in the last 12 months, 26% voted for “value for money”, 2% said “better quality”, and 9% said “uniqueness”. Breaking down the poll, 13% voted for “both value for money and quality”, 8% said “both value for money and uniqueness”, 23% said “value for money quality and uniqueness”, and 19% did not have an opinion. The responses on an aggregate basis indicate that 70% of Indian consumers who purchased made in China products in the last 12 months did so because they felt products offered value for money. This question in the survey received 8,754 responses. 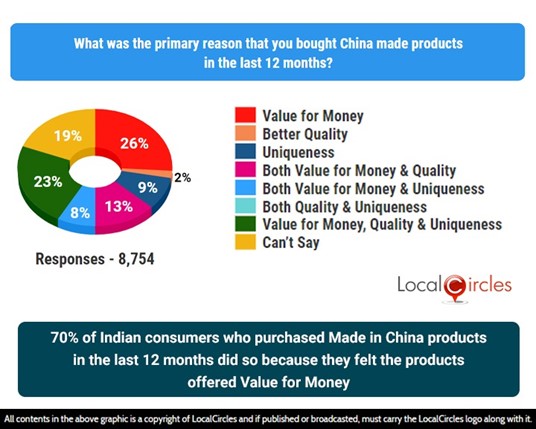 Alternatively, if we are to separately seek out reasons why Indian consumers bought made-in-China products, 70% voted for “value for money”, 40% said “uniqueness”, and 38% cited “better quality.” 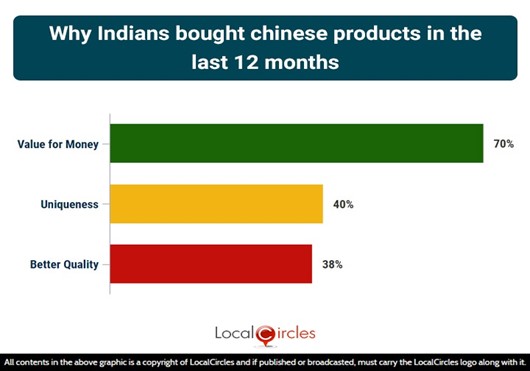 In summary, 43% of Indian consumers did not buy any made-in-China products in the last 12 months. Of those Indian consumers who purchased them, 60% bought only 1-2 items. This is encouraging given that the common Indian had a very difficult year economically and finances were stretched. Also, majority Indian consumers who purchased made in China products did so because they are the cheapest available option and offer value for money. However, 40% of them also highlighted uniqueness and 38% highlighted quality as a differentiator and that is something the Government of India and Indian manufacturers and MSMEs must act upon.

Can Indian manufacturing provide high quality and uniqueness at scale and hence lower cost than their Chinese counterpart is the key test it faces. While escalations like the one in 2020 give a reason to consumers to boycott Chinese and try Indian-made products, consumers generally will only stay with them if the cost-quality-uniqueness and service equation is better and ahead of their Chinese counterparts. If with a combination of Indian markets and global export opportunities, India can scale the value for money-quality-uniqueness factor, at least in some product segments, it can march ahead of China.