Citizens divided over whether AYUSH Doctors should be allowed to perform surgeries, only 14% say they will go to an AYUSH dentist for tooth extraction or RCT

December 10, 2020, New Delhi: The recent notification of the Central Council of Indian Medicine (CCIM), a statutory body under the AYUSH Ministry, to allow AYUSH Doctors to train and perform specific surgeries has brought the medical practitioners in the country in a spate of discussions. The notification has authorised postgraduate Ayurveda practitioners to train and perform 39 general surgery procedures and around 19 procedures – involving eye, ear, nose and throat – and by amended Indian Medicine Central Council (Post Graduate Ayurvedic Education) Regulations, 2016. Even though modern medicine or allopathic Doctors are widely against this recent notification, the AYUSH Ministry maintains that this notification is not a new decision, and that it provides clarity that streamlines with the existing regulation relating to postgraduate education in Ayurveda.

The notification maintains that during the period of study, the PG scholars of Shalya and Shalakya shall be practically trained to acquaint with as well as to independently perform general surgery procedures so that upon completion of their PG degree, they are able to perform the procedures independently. In fact, Shalya and Shalakya have been independent departments in Ayurveda colleges that have been performing these surgical procedures for over two decades, with CCIM of the opinion that this notification only legalises them. On the contrary, the Indian Medical Association (IMA) criticizes that this step will end up mixing the disciplines of modern and traditional medicinal practice, which will have an adverse impact on the patients.

Based on queries and issues raised by citizens, LocalCircles conducted a survey to know their opinion whether or not they are in favour of AYUSH Doctors performing surgeries and if the same were to be permitted, should AYUSH Doctors when engaging in such surgeries be also permitted to use allopathic antibiotics and anesthesia? Citizens were also asked if and when they needed a tooth extraction or root canal treatment, would they be willing to get it from an AYUSH dentist. The survey received more than 28,000 responses from citizens spread across 303 districts of India and generated a lot of follow on queries and discussions amongst the citizens.

The first question asked citizens, “Do you support the recent Government move of allowing AYUSH Doctors to perform surgeries (39 general surgery procedures and around 19 procedures involving the eye, ear, nose and throat)?”. Notably, citizens were divided almost equally over whether AYUSH doctors should be permitted to perform surgeries. Of 11,261 responses, 47% of citizens said “Yes'' they support the Government’s notification, and 43% said “No”, while 10% said “Can’t say”. 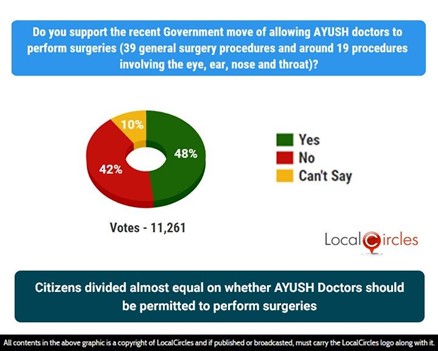 One big takeaway was that people said these Doctors are anyways manning ICUs and General wards in many hospitals, especially in smaller towns and rural areas and have learned such skills with hands-on experience and given the acute shortage of Doctors in such locations, it is better to have an AYUSH Doctor than no one.

In the following question, people were asked about letting AYUSH Doctors use allopathic antibiotics and anesthesia. “If AYUSH Doctors were to perform surgeries, what kind of antibiotics and anesthesia should they be using?”. 9,078 responses were received. Of which, the majority of 35% of citizens voted that AYUSH Doctors shouldn’t be allowed to perform surgeries in the first place, 27% said “Let them use whatever they want to”, 20% said “Ayush based”, 13% said “Allopathy based”. The survey result indicated that 39% are OK with AYUSH Doctors using allopathic antibiotics and anesthesia for surgeries. This is something that the IMA has taken a strong exception to stating that this mixology or mixopathy will cause more problems than solving, and that these two streams must be kept completely separate with the choice available to patients which practitioner they want to visit. 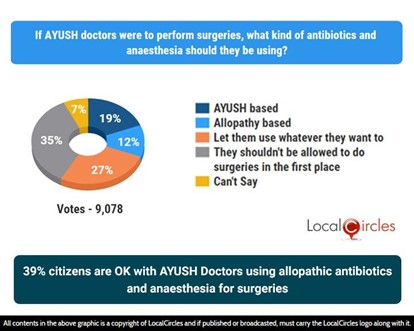 However, when people were asked about their personal preferences and whether they will visit AYUSH Doctors for surgeries via a poll, the results were different. “If you had to get a tooth extraction or a root canal treatment done in the future, what kind of dentist would you be visiting?”, 8,315 responses were received. Notably, 79% said, “BDS/ MDS or allopathic-qualified dentist”, while 14% said “AYUSH qualified or trained dentist”. 7% could not say at this time. 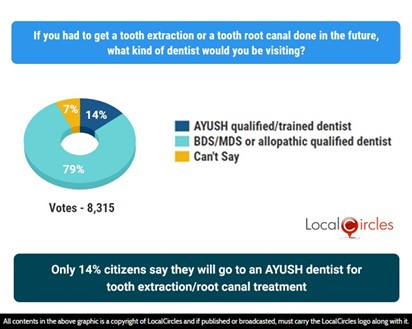 So, this indicates that while 48% are supportive of AYUSH Doctors being permitted to perform surgeries, only a small section of them are willing to go to them personally for even a small surgery like tooth extraction or RCT. This means that while for most, such a move will help the system in making more Doctors available to perform surgeries, they themselves are unwilling to visit AYUSH Doctors.

Performing a surgery is itself a great risk as various factors are to be considered – the level of knowledge required on the correct use of scientific medicines, a sound medical judgement before issuing any anesthetic or antibiotic drugs. Prescribing these drugs requires knowledge and understanding of the side-effects and half-knowledge can be dangerous.

Citizens divided over whether AYUSH Doctors should be allowed to perform surgeries; only 14% say they will go to an AYUSH dentist for tooth extraction/RCT 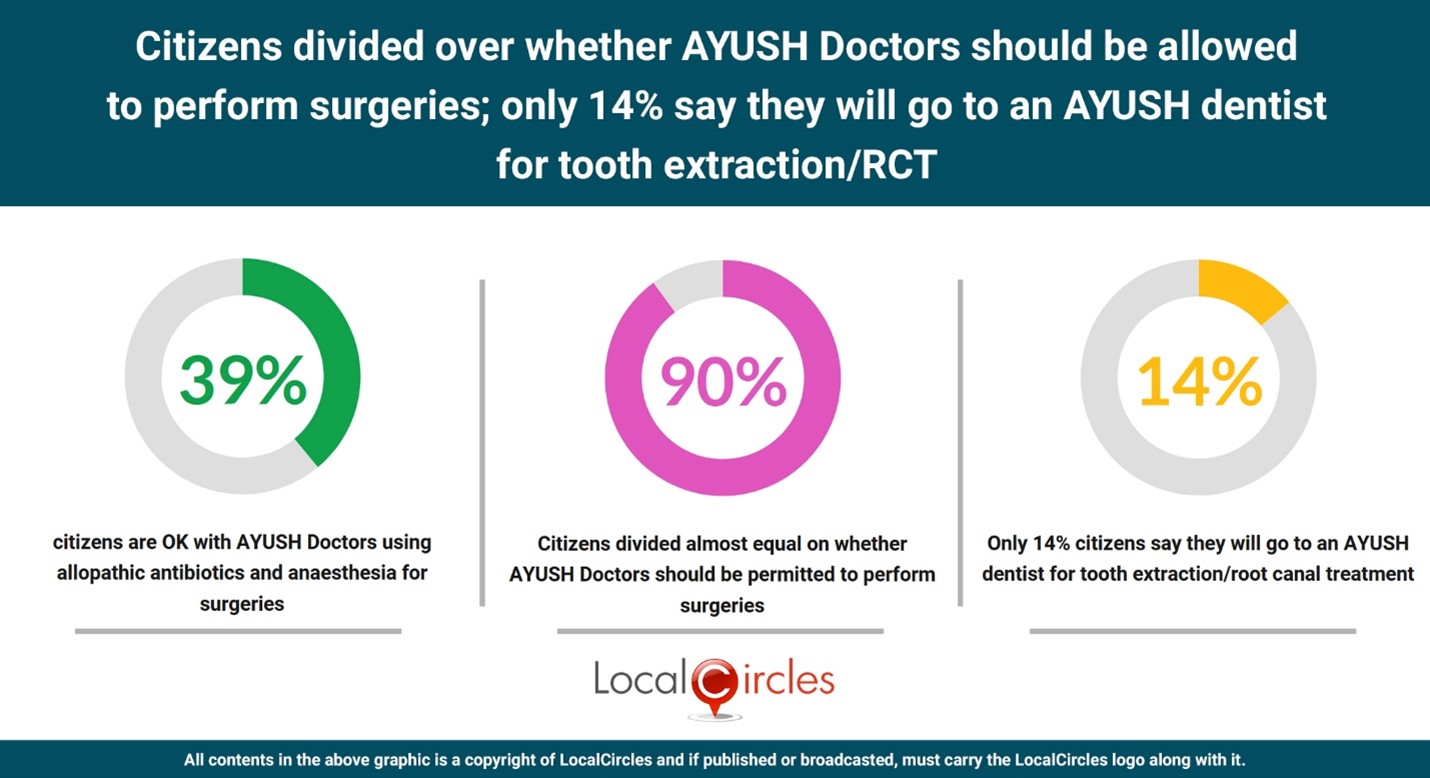 A few ways forward that emerge here from citizen consultation is permitting AYUSH Doctors to perform these general and ENT surgeries, but making it mandatory for them to fully disclose their qualification to patients that they are AYUSH Doctors and do not have allopathy qualifications. Some citizens also suggested a mandatory consultation by the AYUSH Doctors with an allopathic Doctor in the event allopathic anesthesia or antibiotics were being used or prescribed. Citizens also suggested that given how digital medical consultations are now becoming common post coronavirus outbreak, the Government could easily set up centralized allopathic Doctor consultations at Central or State level that AYUSH Doctors must mandatorily use when performing surgeries or using anything allopathic. The key here is to add more capacity in the healthcare system, while ensuring that choices reside with the people through availability of information and that the final treatment and surgery that is administered is safe with all the necessary resources available.

LocalCircles will be sharing these findings and recommendations with various Government stakeholders sensitizing them to incorporate the same as they proceed forward with finalizing the rules and their implementation.