August 24, 2021, New Delhi: With the early warning from experts suggesting that the 3rd wave of COVID-19 is likely to hit India in the months of October-November, the focus of the Government of India has been to vaccinate as many citizens to minimize its impact. India plans to vaccinate the entire adult population, all those aged 18 or more, of the country by the year-end. For that to happen, the country will reportedly need to administer an average of 92 lakh doses per day. India achieved the target of 13.5 crore vaccine doses in July, inoculating an average of 43,41,373 doses per day, which is a 12.5% increase against June’s 11,96,69,381 jabs. Over 45 crore citizens have now received their first dose while over 13 crore have received their second dose.

Previously, states including West Bengal, Delhi, Gujarat, Jharkhand, Maharashtra and Tamil Nadu had raised alert on vaccine shortages with many people across the country also reporting shortages of vaccine when they or someone in their close circle went to get vaccinated. The Centre had assured the availability of vaccines to increase in the coming months.

Last week several citizens from multiple distircts of West Bengal and Karnataka and from cities of Mumbai, Ghaziabad, etc reported vaccine dose shortage. To quantify where things stand from a public experience standpoint when people or someone in their network went to get vaccinated in the last 30 days, LocalCircles conducted another national survey that received 9,516 responses from citizens residing in 351 districts of the country. 62% of the participants were men while 38% were women. 41% respondents were from tier 1 districts, 31% from tier 2 and 28% respondents were from tier 3, 4 and rural districts.

When LocalCircles had conducted the same survey at the end of May, 70% citizens had indicated that they or someone in their close social network could not find a vaccine dose when they went for vaccination in that month. The percentage then slightly reduced to 65% in mid-July and has continued to reduce to 39% as on August 20 as people went to get vaccinated. The number stood at 18% though in early April when the vaccination drive was limited just to those above the age 45 and those with co-morbidities. 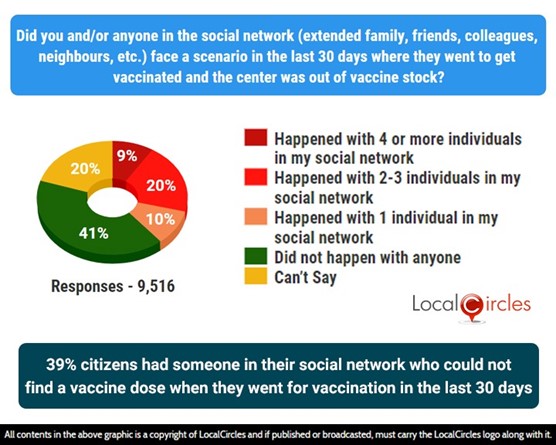 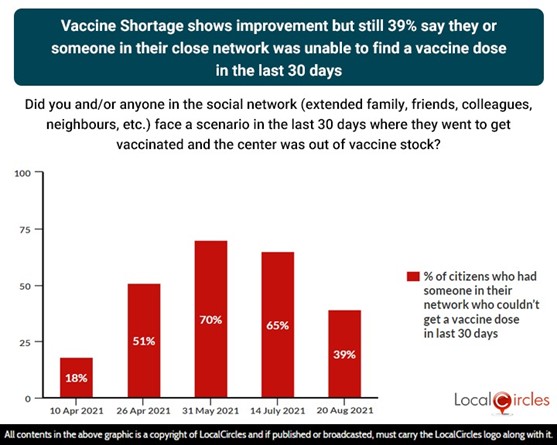 In summary, 39% of citizens in August had someone in their close social network who could not find a vaccine dose when they went for vaccination in the last 30 days. The August number shows a major improvement from July that had 65% of citizens knowing someone who could not find a vaccine in the last 30 days. The efforts by the Central Government should continue on expediting vaccine deliveries from manufacturers and the states must continue their efforts in optimising distribution and availability. People continue to report queues and overcrowding at certain vaccination locations while some other locations making people wait considerably in order to get even 20 people for a vial to be fully utilised. According to citizens, targeted community outreach exercises must be undertaken in such locations where enough people are not showing up for vaccinations to address vaccine hesitancy.

LocalCircles will escalate the findings of this study with key stakeholders in the Central and State Governments for their policy interventions and actions.

The survey received 9,516 responses from citizens residing in 351 districts of the country. 62% of the participants were men while 38% were women. 41% respondents were from tier 1 districts, 31% from tier 2 and 28% respondents were from tier 3, 4 and rural districts. The survey was conducted via LocalCircles platform and all participants were validated citizens who had to be registered with LocalCircles to participate in this survey.