2 in 3 fliers want Government to bring back airfare capping; many complain of excessively high fares 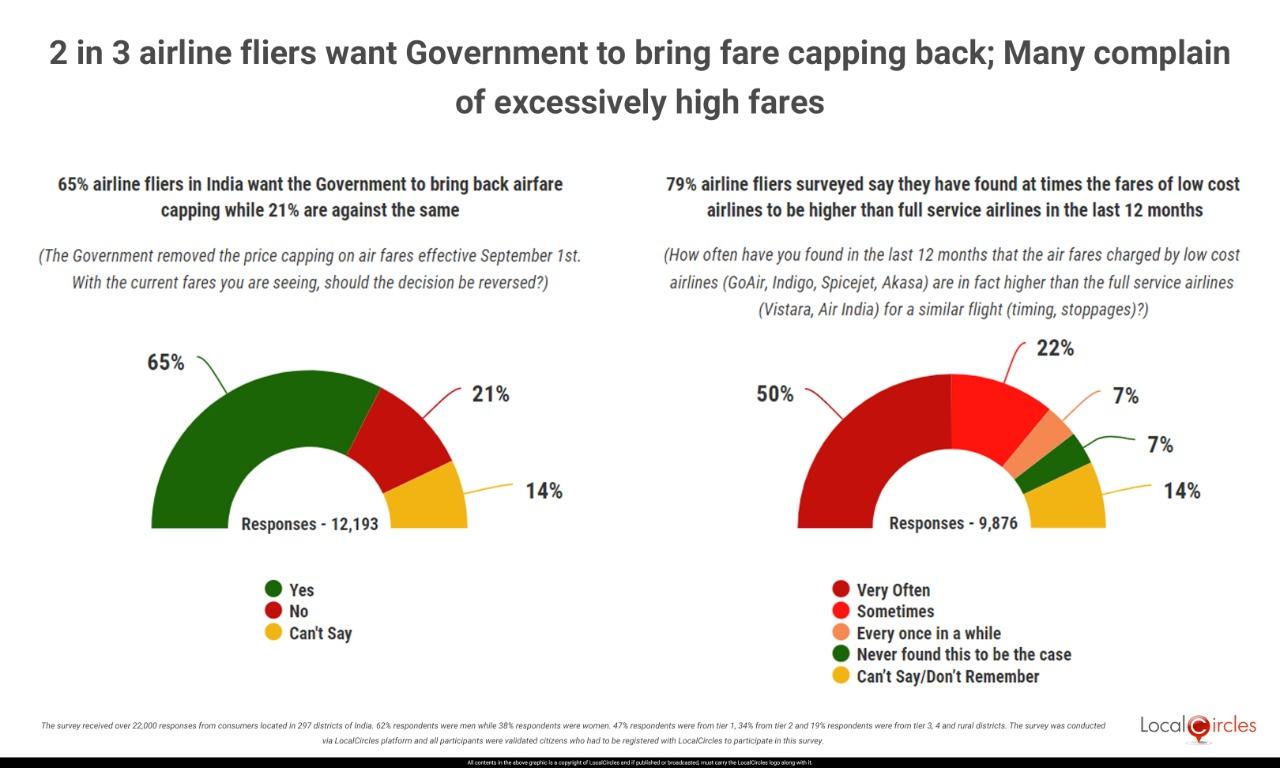 November 11, 2022, New Delhi: After two years, on August 31st the government lifted the lower and upper limits placed on airfares to allow airlines more room to set their own fares and let market dynamics work in the interest of fliers. Aviation minister Jyotiraditya M. Scindia in a tweet had announced that the “decision to remove air caps has been taken after careful analysis of daily demand and prices of air turbine fuel. Stabilisation has set in & we are certain that the sector is poised for growth in domestic traffic in the near future.” Has this government move ahead of the peak festive and holiday season really worked to the advantage of passengers? The verdict is mixed as travel agents claim that it has worked in favour of passengers in only a few sectors while in most sectors the fares on offer remains high despite growing appetite for travel after long months of being housebound or restricting movement to within the city as part of social distancing norms and later as a precaution. In fact, market dynamics does not appear to favour fliers as despite rise in demand, in certain popular routes like Delhi-Mumbai, Delhi-Hyderabad, etc., fares have increased over 20% partly due to increase in aviation turbine fuel (ATF) prices and partly as airlines strive to recoup their losses by capitalizing on higher demand.

In a bid to find out what consumers think about the present scenario, LocalCircles in a survey asked airline fliers, “The government removed the price capping on the air fares effective September 1, with the current fares you are seeing, should the decision be reversed?” Out of 12,193 respondents, 65% stated “Yes” while 21% indicated “No” and 14% reserved their opinion. 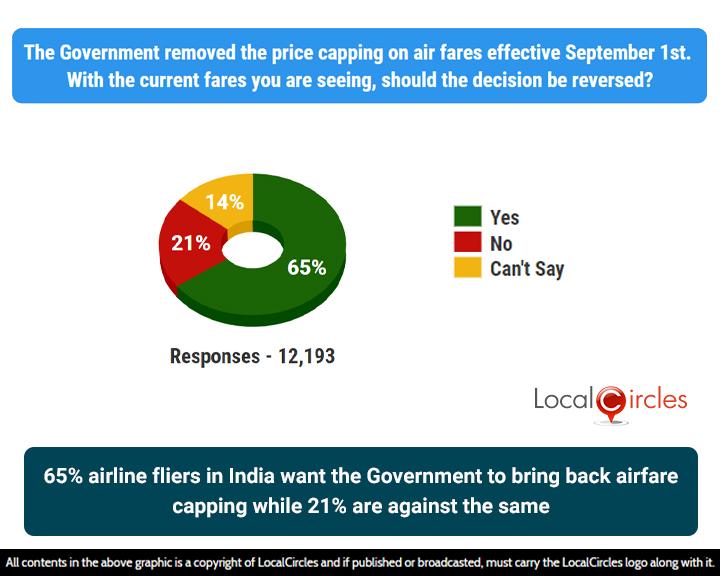 In complaints, members shared examples where they were charged INR 17,000 for a Delhi-Mumbai flight by a low-cost airline without food and seat selection while a full-service airline offered them an INR 7,000 fare making them wonder if low-cost airlines in India are actually low cost. Another complainant questioned an INR 19,000 fare for an 80-minute flight as clear case of profiteering. Given such complaints, LocalCircles decided to quantify this issue to understand if these were more exceptions or the norm.

It asked airline fliers, “How often have you found in the last 12 months that the air fares charged by low cost (GoAir, Indigo, Spicejet, Akasa) are in fact higher than the full-service airlines (Vistara, Air India) for a similar flight (timing, stoppages)”. Of nearly 10,000 respondents to this question, 50% indicated “very often”; 22% stated “sometimes” and 7% “every once in a while”. Only 7% did not find this to be applicable while 14% gave no clear response.

Going by experiences of frequent fliers and a glance at the fares on offer on various platforms, airfares for direct flights or those with one break in journey of short duration are very steep currently. The option is to go for flights that will take longer to reach you to your destination, which seems ironic if a person is opting to go by flight to reach a destination by the swiftest means. 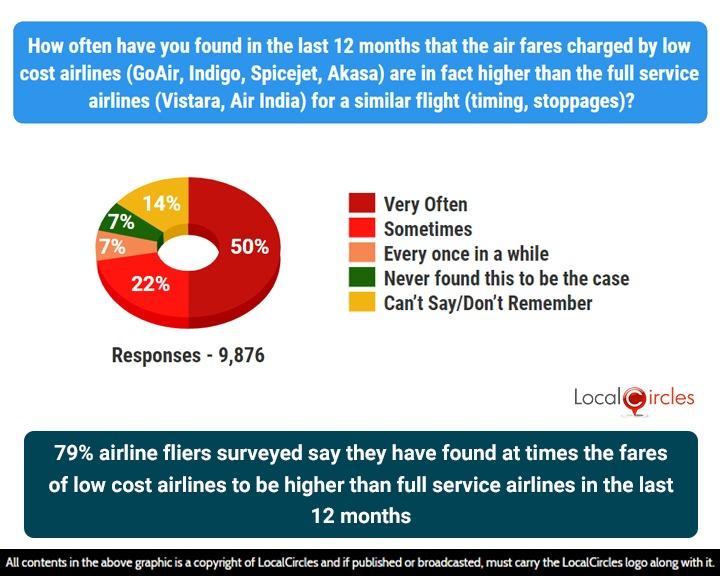 ​Going by media reports all is not well with the aviation sector with more demand than capacity. Aviation consultancy firm Corrective and Preventive Actions (CAPA) in its India Mid-Year Outlook 2023 report released on November 1 has stated that more than 75 planes of the Indian carriers have been grounded due to maintenance and engine-related issues. These planes account for around 10-12% of the Indian fleet. The planes have reportedly been grounded​​ due to maintenance or engine-related issues. The outcome of this sad scenario together with the government lifting the airfare cap is that people are having to shell out more if they want to travel during the upcoming December - January season or rethink their options.

In summary, with the government removing the airfare caps in response to commitments by some airlines about offering lower fares to consumers, it appears that airlines have become the key beneficiaries instead of the consumers. Most of the fliers are actually not benefitting from the Government’s move so far as in many sectors the fares have gone up by over 20% and are likely to go up further given the surge in demand. This is why 65% consumers want the Government to reintroduce the fare caps. What is also noteworthy from the survey is that many a times, the so called low cost airlines are charging steeper fares than even full service airlines according to 79% of those surveyed.

LocalCircles will escalate the findings to the Ministry of Civil Aviation such that both these inputs from the consumers can be given due consideration and the appropriate policy interventions are implemented.