1 in 4 fliers have either lost their baggage or found it delayed during the last three years; 35% found their checked in baggage damaged one or more times 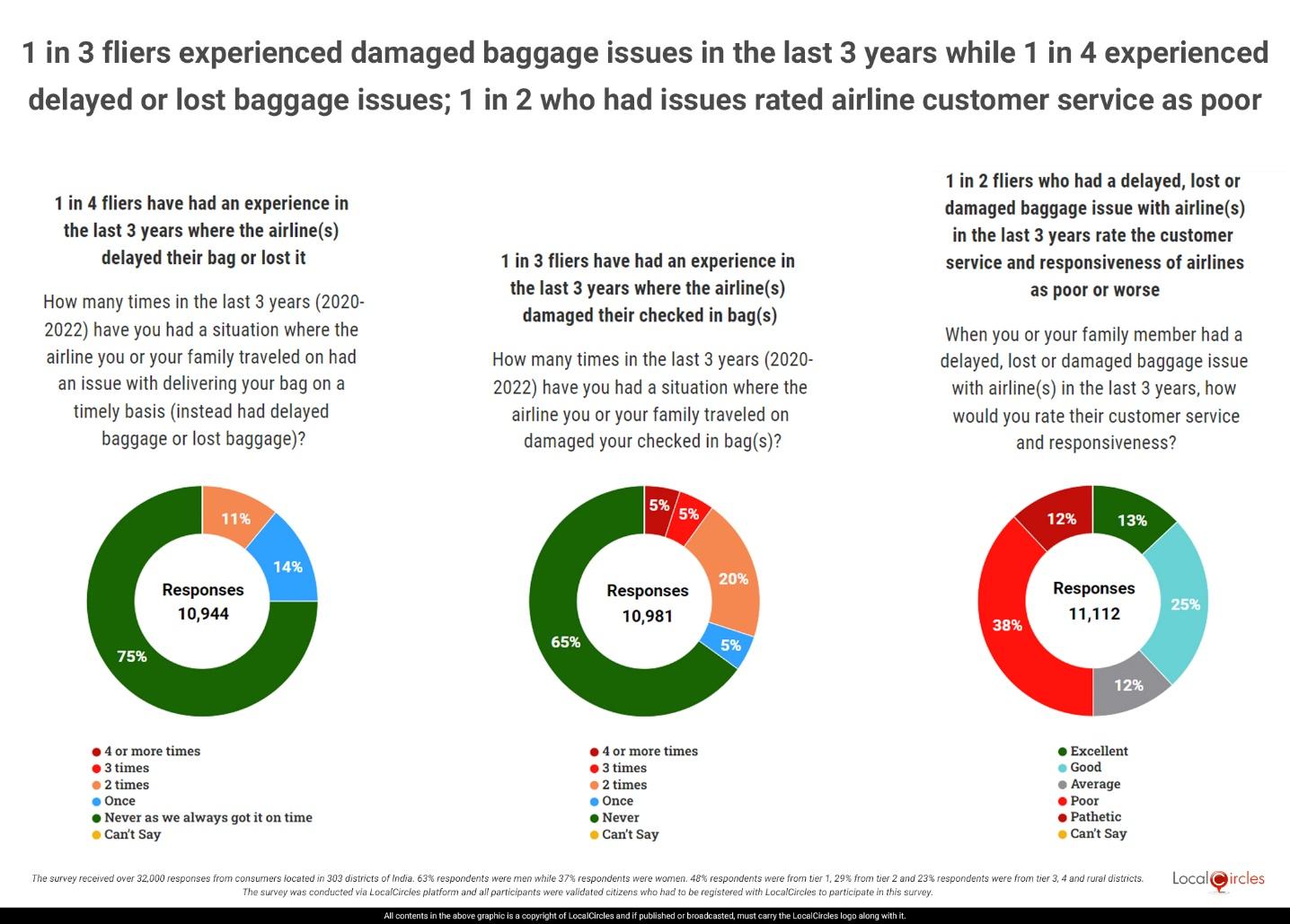 Aug 30, 2022, New Delhi: Have you been one of the unfortunate air travelers who has reached the destination only to find your checked-in luggage damaged or missing after a hectic search? Air India, post disinvestment, was recently in news after several complaints were made by passengers about the poor handling of their luggage, prompting the Directorate General of Civil Aviation (DGCA) to intervene and issue directives to remedy the situation. So have been Spicejet, Indigo and Vistara. There are plenty of social media posts with passengers posting pictures and complaints about missing or damaged baggage after their air travel. Recently, a senior banker posted one such picture stating “Fantastic service by Air Vistara as always, this time damaged luggage at Delhi airport. Never cease to amaze.”

After hundreds of complaints were received by LocalCircles over the last 12 months about poor baggage handling by airlines, it decided to conduct a national study to understand the collective experience of people, from a delayed or damaged baggage standpoint. The study also sought to understand from the fliers how airline customer service was handling such complaints.

When fliers were asked the question “how many times in the last 3 years (2020-22) have you had a situation where the airline you or your family traveled on had an issue with delivering your bag on a timely basis (instead of having delayed baggage or lost baggage)?” it was found that 14% of 10,944 respondents had gone through this experience at least once, while 11% had faced this anxiety filled experience twice. The remaining 75% had always gotten it on time.

Delays due to technical snags in conveyors or baggage logistics equipment, mishandling, failure to send luggage by the correct flight, security issues are among the many reasons cited when passengers are put to hardship at airports by airlines in India. Some fliers have also alleged airline staff occasionally engaging in removing baggage tags leading to their luggage getting held up in the airport lost and found sections. In March this year, according to media reports thousands of bags were reported missing one day allegedly due to a technical snag in the baggage handling system at Delhi’s Indira Gandhi International Airport. According to the Directorate General of Civil Aviation (DGCA) data, missing and mishandled baggage continues to be among the top three complaints of fliers in India. 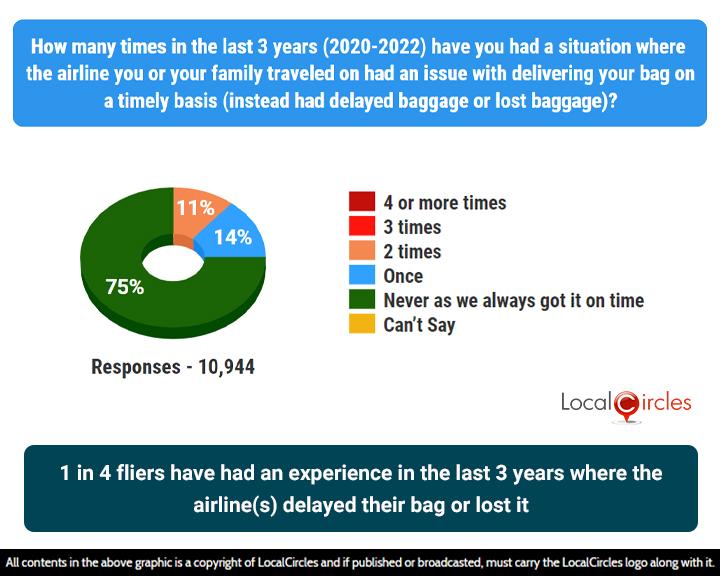 To the next survey question on “how many times in the last 3 years have you had a situation where the airline you or your family traveled on damaged your checked in bag(s)?” one in 3 fliers shared that they faced this experience one or more times. Of the 35% out of 10,981 respondents, 20% shared that they or their family member faced this experience twice, while 5% faced it twice, another 5% thrice and yet another 5% experienced it more than four times in the 3-year period. 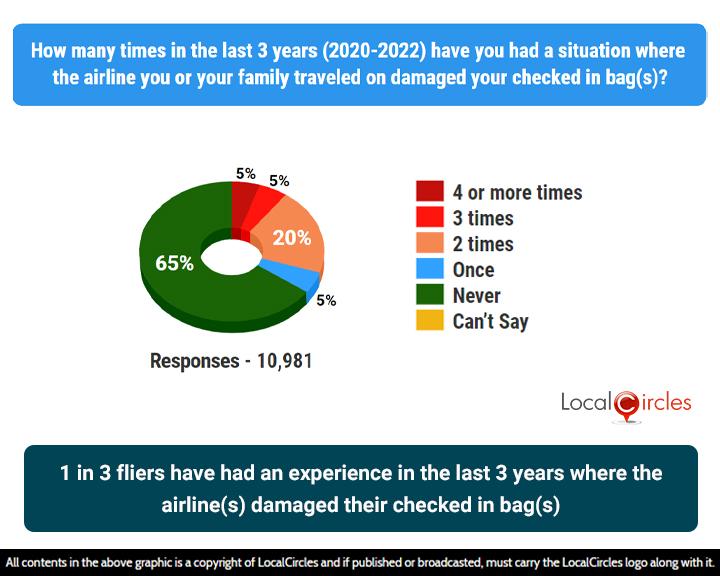 62% dissatisfied with airlines customer service and responsiveness; 38% rated it as poor, 12% described it as pathetic, while another 12% felt it was average

Via the final question in the survey, fliers were asked “when you or your family member had a delayed, lost or damaged baggage issue with airline(s) in the last 3 years, how would you rate their customer service and responsiveness?”, 62% out of 11,112 respondents were dissatisfied. Of these, 38% rated it as poor, 12% described it as pathetic, while another 12% felt it was average. However, 25% rated the air carriers’ response to their complaint as good while another 12% described the remedial action as excellent. 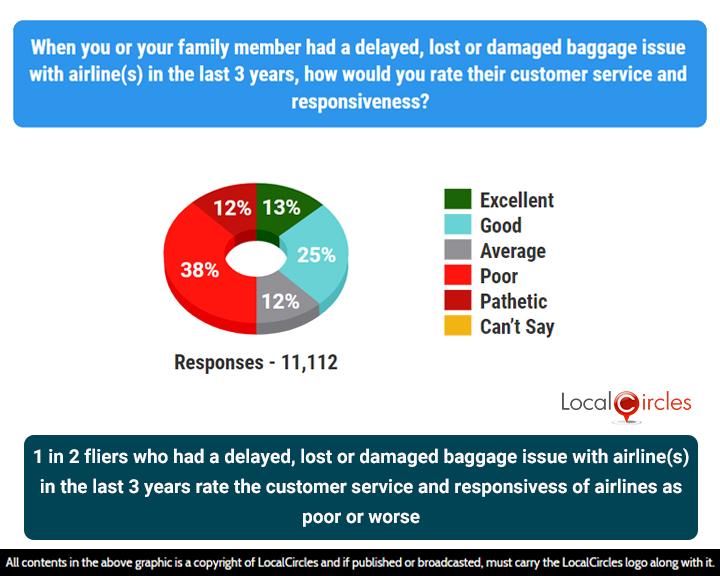 According to International Air Transport Association (IATA), things have improved a lot at an international level since 2007 when baggage mishandling averaged 18.88 bags per 1000 passengers but by 2017 had dipped to 5.57. Currently, of the over 4 billion bags annually carried by airlines globally – 99.57% of these arrive with their owners on time, states IATA, stressing that baggage rules are set by airlines and the industry body plays no role in this. In India as well, each airline has its own compensation policies, within the government’s framework, when luggage is lost or delayed or damaged so it is good for consumers to be aware of them. Experts also suggest that to minimize baggage mishaps, consumers must label their luggage on the exterior with phone number and initials, which will enable the airline to help them get the lost luggage faster to them. It is also suggested that a contact information card be placed on the handle in a flap and a picture of the baggage be taken at check in. According to some experts, there are more chances of losing or damage if a bag has fragile, valuable and restricted items like power banks, liters, etc.

While the fliers must follow the expert recommendations, it is clearly the need of the hour that airlines make it very easy to report lost baggage and are informed via sms/whatsapp/email notifications about their complaint status. This is still rare with most airlines and long queues are common at baggage claim counters. Once a claim is filed, it is extremely difficult to track the status of lost baggage online or via a toll-free airline number. This is one of the reasons why many fliers have had a negative experience. In addition to the anxiety of not getting their baggage when they are on the road if the experience of tracking it is full of hassles, it leads to many fliers refraining from flying that airline again, atleast for some time.

In summary, as air travel picks up in 2022 and 2023, chances are fliers may be faced with more instances of baggage delayed or lost unless airlines take tangible action to address the process and communication gaps. LocalCircles will escalate the findings of this study to Ministry of Civil Aviation and DGCA so atleast some policy interventions are implemented to improve baggage handling by airlines in India.