3 cheers for all circle members and localcircles and Govt of India. This has been done an hour back. See below.


India on Wednesday suspended all tourist visas till April 15 in a bid to contain spread of novel coronavirus, according to an official statement.

The suspension will come into effect from 1200 GMT on March 13 at the port of departure.

The decision was taken at the meeting of group of ministers held here under the chairmanship of Health Minister Harsh Vardhan.

"All existing visas, except diplomatic, official, UN/International organisations, employment and project visas stand suspended till 15th April 2020. This will come into effect from 1200GMT on 13th March 2020 at the port of departure," the statement said.

Any foreign national who intends to travel to India for compelling reason may contact the nearest Indian Mission, the release said, adding that all incoming travellers, including Indian nationals, arriving from or having visited China, Italy, Iran, Republic of Korea, France, Spain and Germany after February 15 will be quarantined for a minimum period of 14 days. more 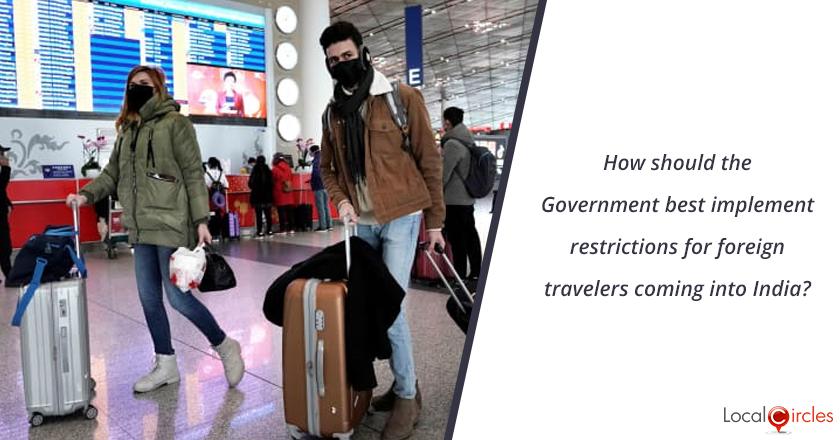 How should the Government best implement restrictions for foreign travelers coming into India?
Participate in Poll.
Helpful Transforming India Mar 11
Viewed by 1640
View all 19 comments Below 19 comments

Csn Sarma (socialworker)
Fear reduces Resistancy and endangers. Sneezing Cold with Cough , TO BE SPOT MEDICALLY Treated. Added Strong Breath MUST BE kept under observation .
THIS MUST BE DAILY PUBLICISED , NOTIFIED BY ALL MEANS OF COMMUNICATIONS . more
Mar 17

Gopabandhu Mohapatra
As far as possible, there should be restriction for tourists. more
Mar 13
View 19 more comment(s)
Post a Comment