In a first of its kind interaction after Narendra Modi took over as Prime Minister, the top brass of the RSS and its affiliates, the government and the BJP came together on Wednesday to deliberate on various national issues.

There was speculation that the demand for one-rank-one-pension over which ex-servicemen are agitating in the capital was discussed on the sidelines of the three-day coordination meeting.

Governance issues like the land bill and the Patels reservation agitation in Gujarat and recent census figures are also on the list of items to be deliberated.

BJP General Secretary Ram Madhav, who has been deputed by the RSS to the party, told reporters that there would be no discussion on the OROP issue, adding that the government is seized of the matter.

"The meeting is about how we should move ahead into the future. It's not about any review of the government or any policy and programmes," he said.

Sources said government would be given a feedback over the issues before it but it would not be any threadbare analysis of any specific programme or policy.

There was a feeling among the participants in the meeting that the contentious OROP issue should be resolved at the earliest, considering that it is an issue dear to the Sangh Parivar. more
Helpful Lets discuss Elections Sep 03
Viewed by 1305
View all 13 comments Below 13 comments

Rajagopalan Vanchesan
This is similar to the NAC headed by Mrs Sonia Gandhi durimg the UPA rule. She only laid down policies and reviewed theri performance. Why no one questioned NAC or Soniaji at that time. When good things come from any one please accept with grace. more
Sep 10

Prakash Gautam
who are you ? and who assigned you for it exercise that's you are and some others like you are doing. for just information kindly respond. more
Sep 04 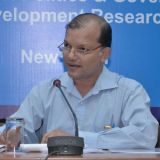 DENZIL FERNANDES
Is the Modi Government accountable to the people of India and the Parliament OR is it accountable to Rashtriya Swayamsevak Sangh? Is this the changing face of Indian Democracy? How can any Indian citizen stomach the idea that an elected Government is subservient to a socio-cultural organization? more
Sep 04

RAKESH MATHUR
As mention by spoke person, there is no talk on the Govt.issues, then matter should e not discuss in public with link 0f any thing, even in my opinion, BJP can not discuss any Policy issue with the organisation which has no identity with the politics. more
Sep 04
View 13 more comment(s)
Post a Comment