OUR EXPECTATIONS Vs THE EXPONENTIAL POTENTIAL OF COVID 19 TO PROLIFERATE :

The curve of COVID 19 cases in India was expected to plummet to Zero by 16th May .Unfortunately that didn’t happen. It was predicted that the new cases would drop to 1,000/day from 3rd may during Lockdown 3 . Unfortunately it has been going on the rise jumping to 3,600 cases consistently since the 2nd week of may 2020.Either the citizens didn’t comply with the shutdown norms or the exponential capacity of the Virus was under estimated . Any way we have gone to the Shutdown 4 , where more caution and care is to be observed by the Citizens , otherwise may turn out to be like U.S. and Europe .

THAT MEANS MEDICS AND PARA MEDICS IN INDIA HAVE DONE THEIR VERY BEST WITH THE COOPERATION OF PATIENTS ; AND ALSO WE HAVE LEARNT THE POSITIVE POINTS FROM THE EXPERIENCES FROM THE OTHER COUNTRIES AND PUT INTO PRACTICE .

India was over confident till March 2nd week as the cases were far and few as we were short of Testing kits early . Once the Test kits were sufficient and more tests were made more cases were detected .

This is what the table indicates to us . The top 6 States in cases show high number of Tests per Million population. Some states like J&K and Andhra pradhesh have come out with low cases though with high testing .

On the contrary , States like U.P. , Bihar, West Bengal and Telengana their testing is in 3 digits only per million .Not even 10 TO 20% of the Number of testing done in the 6 states that top in cases .

WILL IT MEAN THAT WHEN TESTING RATE / MILLION IS INCREASED THE STATES WILL HAVE TO BE READY TO OFFER TREATMENT AND MORE BEDS ? more 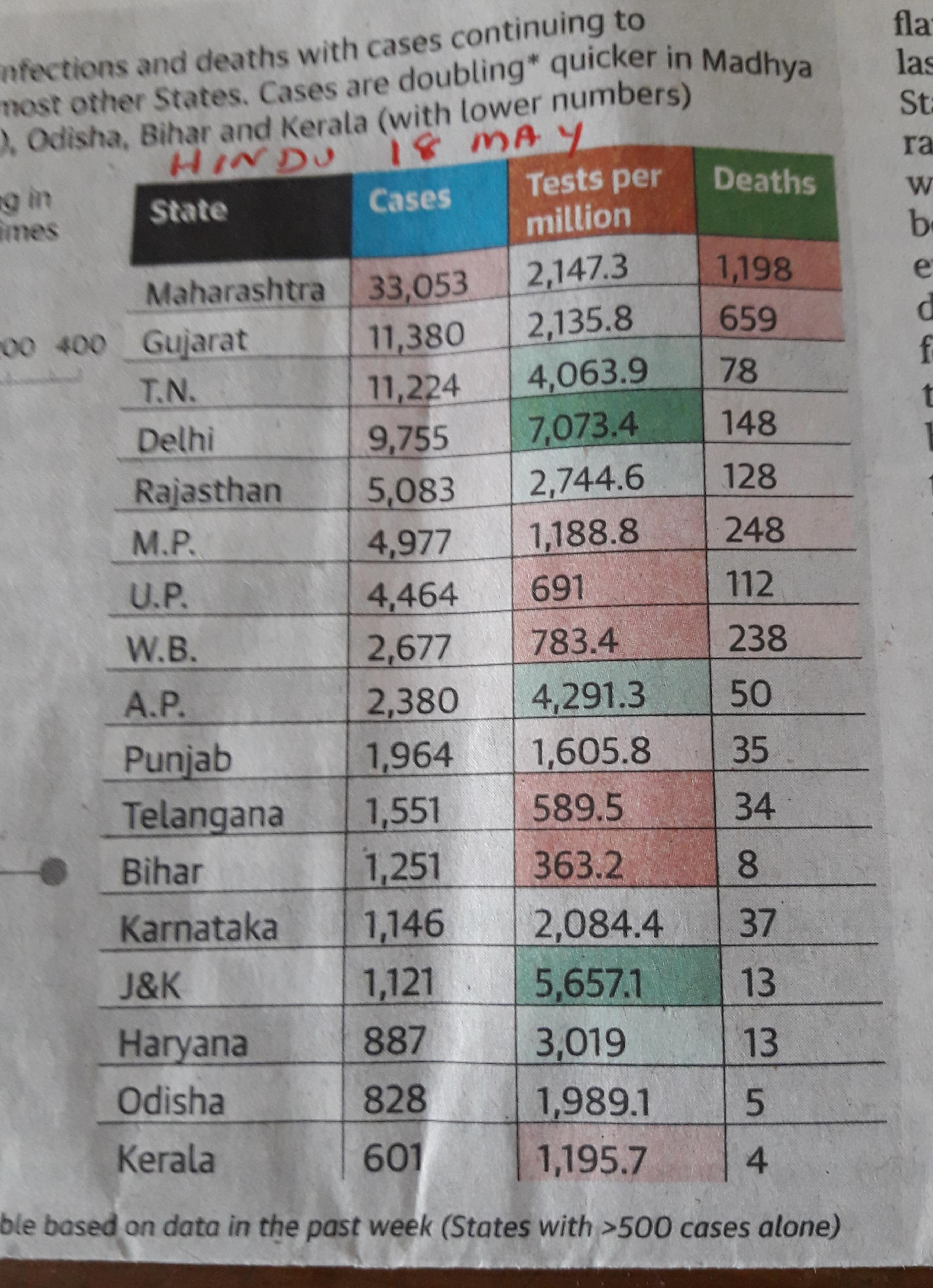 Satya Pal Ratti
Anyone who ever set hopes on the number-curve to scale down, or even flatten as a function of time was being unrealistic. Also, the number game can be very confusing and enigmatic at the same time.

Available statistical trends support the fact that the "exponential" part of the curve is going to climb higher still. Masses have not yet woken up to the "awareness about this reality of Covid-19". May be, that's why Kerala rises as exception.

The statement, "While trying to fight with Corona, learn also to live with it", would appear to make sense. more
May 20

Jayakumar Daniel (Topur Organizer, Yoga practitioner and helper. )
Thank you sir . A change in topic would have made a better appeal . more
May 20

Koiredla Chandrarao
Let the other states follow the strategy adopted by Goa in containing COVID-19 pandemic. The strategy of Goa state is excellent. Besides, we should strictly follow the social distancing norms etc. promulgated by the WHO, the Health Department & the AYUSH Ministry. more
May 19

Jayakumar Daniel (Topur Organizer, Yoga practitioner and helper. )
Yes Mr. PNBarghava ,there s a lot of criss crossing going in big numbers throwing the safety norms to the winds . It would take some time for it . Now that seems to be occupying the attention of the administration . more
May 19

Prithvi Nath Bhargava
We may have a better picture of controlling Covid-19 spread, once the issue of migrating labour force is settled. more
May 19
View 8 more comment(s)
Post a Comment